To say the least, the noughties, another term for the 2000s, have been an interesting decade, but they didn't turn out to be the happiest in history. The nation recently went through the worst economic depression since the 1930s, a frightening terrorist attack in 2001, two wars and a devastating natural disaster. The moments the nation failed to experience are also upsetting. Even with a new presidential administration, wars are continuing and health care reform has yet to materialize. 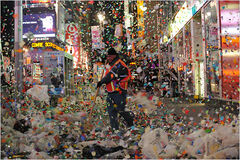 This decade, the nation also witnessed the shocking deaths of numerous celebrities, from Heath Ledger to Michael Jackson to, most recently, Brittany Murphy. These performers held so much promise and had bright futures that terminated too quickly.

Simultaneously the decade offered a chance for the nation to start fresh. The progress the nation has made in the 2000s indicates promising and positive changes in the future. Political barriers have been broken in Washington, D.C., as Barack Obama was elected as the 44th president and Sonia Sotomayor nominated and confirmed as a Supreme Court Justice.

The noughties also gave birth to one of the most important inventions in history - the Internet. As a result of the technology, online media exploded and life's pace grew quicker. Now, search engines, email and web sites allow a steady stream of information. Online social networks, such as MySpace, Facebook and Twitter have sprung up like dandelions, connecting people across the nation and the world.

2010 only serves more promise. Why not use the Internet to create a new direction or lead the way to change? This medium is not simply there to provide a way to write statuses or post pictures. It provides a form of expression and an endless source of available attention. We must utilize the golden opportunity of a new beginning to change and make a difference. A new year always comes with glitter, bright lights and parties. It also comes with expectations that can be shattered or fulfilled. Let's resolve to make 2010 better than the last.