It's a bird! It's a plane! It's another conspiracy theory!

Early last week, a trail of vapor was seen off the southern California coast. A KCBS news helicopter filmed the image and within hours, the video went viral. Experts across the country were weighing in and dubbing the incident as the "Mystery Missile." All of a sudden, this was no typical aerial launch. This was a national crisis. 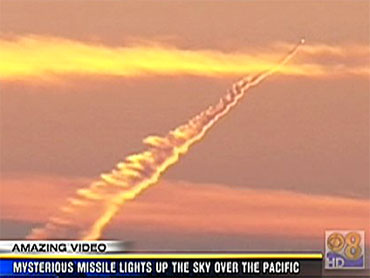 Photo: A still shot of footage of the "Mystery Missile."

Photo: A still shot of footage of the "Mystery Missile." Photo courtesy of CBS.

Let's be honest. Though conspiracy theories have always been far-fetched, the "Mystery Missile" reaches new levels of paranoia. Fortunately, the Pentagon's report on Wednesday concluded that a commercial airplane caused the condensation trail - which begs the question, how did this 10-minute clip become a state emergency?

Left to its own devices, the "Missile Mystery" would have been a blip on the public radar. Instead, in the two-day span before the Pentagon's statement, reporters on every major news outlet were given the freedom to say whatever crackpot theory popped into their heads and the Internet was overflowing with self-proclaimed missile specialists.

In an ideal world, news would be unbiased and nonpartisan. Although these journalistic principles don't always hold true in reality, the media is responsible for quelling situations and providing accurate information, not contributing to mass hysteria. The entire, overblown episode was given an appalling amount of airtime and critics hurled insults at the government for not designating the "Mystery Missile" as a priority.

Thankfully the "Mystery Missile" was insignificant in the grand scheme, but it was handled poorly and serves as an indication of the media's shortcomings. Even though the faux-crisis may have reached conspiracy theory status, it's time to wrap up this non-mystery and move on.