The mystery of Blair's dead pig

Unbeknownst to many Blazers, there is a decomposing pig residing on campus. Tucked away in the swamp behind the baseball field, it isn't easily accessible, and it is largely kept quiet. However during the spring, the distinctive smell of a decomposing pig is certainly hard to miss. Most Blazers have no idea the pig exists, but for the past nine years, the pig has played a major role in Blair's Forensics classes.

As a part of the Forensics curriculum, the dead pig in the wetlands is a part of an entomology study that numerous Montgomery County schools participate in. Megan Hart is the Forensics teacher in charge of the project, and she loves it because she's designed it into a dual study. "It's both studying how the pig is decomposing in different stages, and also the succession of insects and what insects come during what stages of the decomposition process," Hart says.

Each year, a new dead pig is brought to its cage around April, when the weather starts to warm up. Every class period, weather pending, the Forensics students go outside and study the physical changes that have naturally occurred to the pig, as well as observe the insects that arrive in the wooded area around it. The students work in teams of four, and each person is designated a specific role in the data collection process, one of which is to collect bugs in the surrounding environment.

The pig sits in a cage in the wetlands for a number of reasons, the obvious one being that it's out of the way of the students and the sports teams. The cage has large holes on the sides, which prevent animals that might eat the pig from doing so, while still allowing bugs to easily access the decomposing pig. "There's also kind of flat and shaded land down there, so you can see more of the decomposition process that takes place a little bit slower than if it were out on a blacktop,” Hart says.

While not many Blazers are aware of the pig, there are a number of small rumors that fly around about it. They tend to be horror stories of having to pick bugs up or clean off the pig. "There's a lot rumors that stem from the pig. I hear the rumors myself, but they're not true, I do the lab myself," Hart says jokingly, "They're not handling the dead pig, they're studying and making observations about its decomposition.”

Hart buys the pig each spring from a local butcher for about $50, or the equivalent of what the pig's meat would typically cost. In other words, the pig isn't killed specifically for the lab, which is the case in many other high school labs. Every year Hart deals with a number of students concerned with the process of acquiring the pig, "It's food grade animal waste. It sounds weird, but it's important because I'll have students who [need to] know there's no animal harm going on for this lab," Hart says. 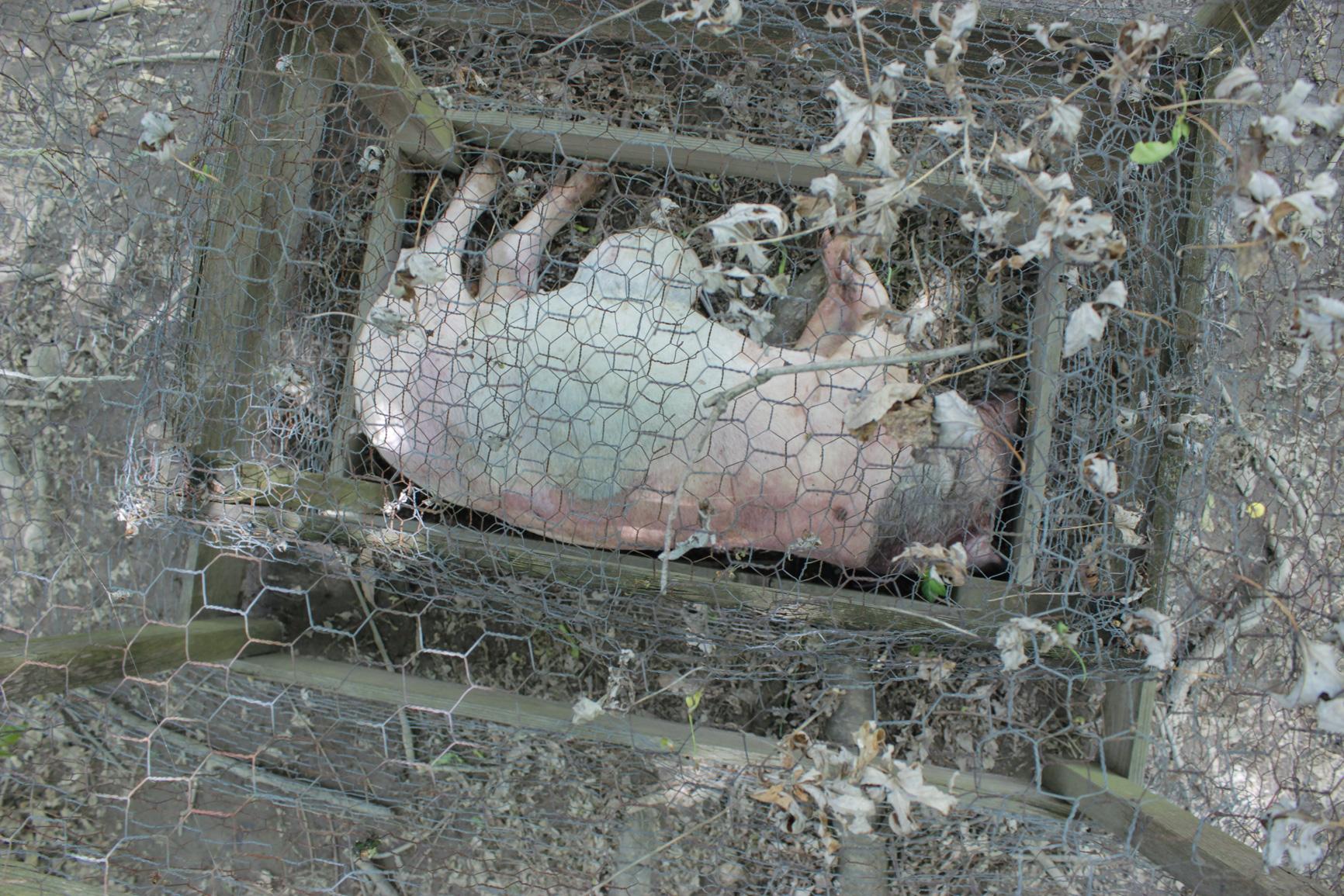 Photo: The dead pig resides in its cage, which keeps out other animals.

Photo: The dead pig resides in its cage, which keeps out other animals.  Photo courtesy of Ben Lickerman.

Hart says that students occasionally do have negative reactions to the pig and become disgusted by its physical appearance and smell. "It's interesting because in the moment, they think it's really gross or that it smells really bad, but then when I talk to former students, they always seem to have fond memories of doing it," Hart says.

Senior Kyle Kirwan participated in the project last year. "At first I didn't really like the project because of the smell," he says, "but Ms. Hart's enthusiasm got me more excited, and I ended up liking it a lot."

Cook has yet to start the project this spring. "I am looking forward to it, but I am not going to be eating very heavily on those days," he says. "I've heard that when dead animals decompose, their eyes go first, and that's a really freaky idea for me so I'm not looking forward to that.”

Since students can choose their own groups and their roles within them, they don't collect insects if they don't want to. The students who collect the insects volunteer to do so. Fortunately, those who volunteer are given gloves to touch the bugs. Kirwan was the team member who collected the bugs. "There was larva all over it, beetles too, and it was nasty," Kirwan says.

In the initial stages of decomposition, it's hard to smell any signs of the dead pig. However, as the weather gets warmer the pig simultaneously goes into its second and third stages of active decay, which is when it begins to smell. "The pig was pretty gross, after a couple a weeks it was hard just to go close to it because it just smelled terribly and nasty," Kirwan says.

Slowly, the decomposing pig and its distinct smell will fade into distant memory. All that will remain are the bones, which will give way to the new dead pig next spring. As will the select group of students who know about the pig—who will graduate and give rise to the next crop of Forensics students.