The new "King" of South Beach

On July 8, LeBron James sent the sports world into a frenzy with his announcement to join fellow National Basketball Association (NBA) all-stars Dwyane Wade and Chris Bosh on the Miami Heat. James was criticized for the way he left the Cleveland Cavaliers - people, especially Clevelanders, labeled him as a selfish jerk who needed an hour-long airing on ESPN, titled "The Decision,” to boost his enormous ego. Cavaliers fans took aim at James by sending angry tweets, burning jerseys and posting bitter Youtube videos. 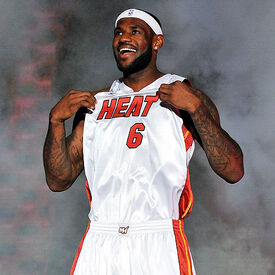 As summer rolls on, James continues to feel the heat (no pun intended) as a result of his negligence toward Cleveland. On Aug. 3, James took out a full-page ad in the Akron Beacon Journal thanking his hometown of Akron, Ohio, but failed to make any mention of Cleveland, where he spent the first seven years of his NBA career. He then tweeted that he's "been keeping mental notes of everyone taking shots at [him]” and plans on using the criticism as ammunition for the upcoming season. For a city that hasn't won a championship in any major sport since 1964, it's understandable for fans to be upset over losing the second coming of Michael Jordan. On the other hand, to think that James owes something to Cleveland, a notion that many fans, former athletes and sports reporters have claimed, is simply preposterous.

First and foremost, James is a basketball player. He's not a politician, he's not a doctor and he's not a lawyer. His job is to play basketball. To say that he owes something to his (former) fans and that he must have an influence in areas outside of the basketball world is unrealistic. James has already done his part for the city of Cleveland. He played seven years for the Cavs, and took them to the NBA finals in 2007. The fact that James didn't win a championship in Cleveland is owner Dan Gilbert's fault, not James'.

LBJ put up insane numbers (27.8 points, 7 rebounds and 7 assists for his career, according to Yahoo Sports) for the Cavs, but he's been surrounded by mediocre talent. James needed a sidekick, someone to help take the pressure off when he was faced with double-teams, or someone to pick up the slack when he was having an off-game. Jordan had Scottie Pippen during the nineties, Shaq had Kobe in the early 2000s. The Cavs, aware of this, thought they had found a worthy number two for James in 2008 when they traded for high-scoring guard Mo Williams. However, Williams' stats dropped off in two seasons as a Cavalier and it seemed that Cleveland was still a one-man team, capable of doing damage in the regular season but unable to reach the promised land come playoff time.

As far as the decision goes, how can you blame someone for ditching Cleveland to go and play in South Beach? Los Angeles and Miami are the two places every NBA player wants to call home. Not to mention being able to play with D-Wade and Bosh - two incredible young talents in the game. NBA legends such as Magic Johnson and Charles Barkley ripped James for taking the easy road by choosing to play alongside other superstars instead of staying with the Cavs and trying to win a 'ship by himself. But the reality is, winning titles is winning titles, no matter how or with whom it's done. And with that mentality in mind, James is the NBA's most valuable player, the youngest player to reach 15,000 points and the new king of South Beach.