The "Nicki Minaj Challenge" is a new viral craze

The video was meant to be funny but her fans turned it into something more: within six days of posting, the video received more than 11 million views and 660k likes. This fun new challenge went viral, helped along by the fact Minaj's stardom. It is undeniably clear that celebrities are a major influence to their audience, so when a celebrity releases a new challenge, their fans will jump at the chance to do it.

The idea of the challenge is to imitate Nicki Minaj. Some do it by copying what she says word for word, and others change the words up to fit the situation. Everyone who participates in the challenge makes it their own, whether it's because they wear costumes, they say different words or their attitude when performing it. "Attention! This is how bad girls get up in the morning to go to school, some of you all can't even spell school!" One girl who performed the challenge said. 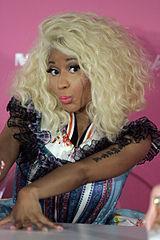 It is unclear when exactly the video was turned into a challenge as it was not intended to be one. Nicki Minaj posted a fan's imitation video on Instagram, captioning it "oh no baby what is you doing...too soon," showing her surprise at the new challenge in her name.

Various celebrities have also participated in the Nicki Minaj Challenge. Kylie Jenner joined in on the fun with her effortless imitation of Nicki Minaj. Her "#nickiminajchallenge" snaps made it to Instagram where they gained more than 1 million views within 24 hours. Even popular YouTubers such as the Fine Brothers took part by uploading a video titled "YouTubers React to Nicki Minaj Challenge," where YouTubers also participated and added their own imitations of Minaj.

Over the years, online challenges have grown in popularity and variety on YouTube. From the cinnamon challenge, in which someone tries to eat a spoonful of cinnamon, to the smoothie challenge, where people make a smoothie out of random foods not traditionally found in smoothies. Nearly anything can become a challenge in today's digital age. They can also be useful marketing tools.

The music industry uses challenges as a platform to promote artists. Katy Perry posted a video in May where she sprayed herself with water and tried to maintain looking sexy, captioning it "#bonappetitchallenge" on Twitter. The whole point of the challenge is to still look like a star even as you are being sprayed with water. Katy Perry used the challenge hashtag to promote her song and music video titled "Bon Appetit."

Some challenges have been very beneficial to certain causes and charities. The Ice Bucket Challenge, which rose in popularity in 2014, is when people pour a bucketful of ice water onto themselves to raise awareness for Amyotrophic Lateral Sclerosis (ALS), a deadly nervous system disease. Many celebrities, such as Oprah, Bill Gates and Lady Gaga, participated in the challenge helping to make it more popular.

Challenges will continue to grow in popularity, especially since celebrities love getting involved. And thanks to social media, challenges are becoming viral more quickly. People are attracted to doing challenges and the Nicki Minaj Challenge is no different. With how influential famous people are, it really is no surprise that imitating celebrities is a popular trend.