The "One" that you shouldn't watch

"The Brave One" fails at being interesting

This movie is boring. Naps are appropriate during several irrelevant scenes throughout the movie, since most of the two hours of screenplay are of Erica Bain (Jodie Foster) talking in a stoic tone or walking, listening to the environmental noise in New York City. The only substance in the movie comes from the sporadic vulgarity and gunshots, barely enough material to make a ten minute short film that belongs on YouTube.

"The Brave One" focuses on a woman named Erica, who is recovering mentally from a brutal attack that leaves her seriously injured and her fiancé (Naveen Andrews) dead. Erica becomes paranoid and damaged; as a result, she seeks to heal her life by becoming a vigilante. 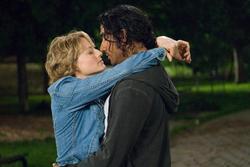 Credit must be given to Foster, who plays the depressed Erica well. Her facial expressions of anxiety and fear are one of the only worthwhile elements of the film. Foster truly develops the image of a depressed person gone psycho. However, her depression is boring. Even though her body language and tone are appropriate for her character, ironically, these two positive aspects of her acting ultimately make the movie unwatchable because there is no variety.

When Erica walks in the city, sometimes the camera rotates back and forth to try to create a paranoid feeling. Instead, it succeeds in making viewers dizzy and sleepier. In combination with the slow, soft music, patrons of the theater will fight to stay awake, a spell broken by the occasional gunshot.

Though it looks like it could be a thriller, "The Brave One" is about as thrilling as a "Land Before Time" movie. Since the trailer follows the movie's exact plot line, don't be surprised if you can guess what happens in the end from the very start. Instead of adding suspense to the movie, the setting reveals the general plot, so the supposed thrill factor is shot.

Apart from the lack of moving suspense and fantastic acting that dulls, "The Brave One" falls flat on several other points. While the plot is predictable, it is also terrible. Erica stumbles across several thugs regularly (always at night). The writers seem to think that Erica is destined to always encounter misfortune. Of course, Erica always gets away after shooting the physically superior thugs. She literally gets away with murder. Is it really possible to avoid being caught by anyone in the "safest big city?"

The theme of sexuality in the movie is hopeless, as the circumstances of nudity are appalling and seeing Foster's character alternate between nudity and bloody nudity is just awkward. Sadly, Erica only fondly remembers her deceased fiancé in sexual situations. Director Neil Jordan must have believed that memories with a loved one are most fond if they involve bareness.

The movie's ultimate lesson seems to be that you will never be able to cope with your past unless you assassinate the people that have hurt you (among others). Thus Erica goes on a killing spree, murdering people without notice. Nobody saw any red flags? A sensible character would have tried to get help.

The worst part of the movie is that Erica justifies her actions. Sean, a homicide police detective, allows Erica to finish her rampage and even covers up for her. Even though the characters do bad things, the writers of the movie seem to be encouraging people to take the law into their own hands against those who have hurt them in the past. Erica isn't Spiderman, who fights to protect, but rather a woman with a vendetta, who fights to cope. And the way she is portrayed in the movie, she is definitely not a hero.

The combination of bad writing with good acting ends like predicted: terribly. What garbage will Hollywood writers come out with next?

"The Brave One" is rated R for strong violence, language and some sexuality. Now playing in theaters everywhere.