The other Montgomery Blair players

Backstage in "The Comedy of Errors," a whole new story unfolds

On a backstage door surrounded by electrical cords, screwdrivers and small power tools, a sign reads, "The stage crew does whatever it takes to ensure the success of the production." For stage crew director John Kaluta and his Blair students, this slogan is a way of life.

While the Montgomery Blair players memorize the lines to Blair's 2007 winter play, William Shakespeare's "The Comedy of Errors," the members of the stage crew do their best to recreate the play's location of ancient Greece.

The crew will meet every weekday after school and on some weekends before the play premieres Nov. 2. But with the long hours comes a powerful bonding experience, says junior Josh Cutick, now in his second year of crewing. "My favorite part is the teamwork," he says. "Nobody works by themselves. There's a big sense of family…I have met a lot of people here; it's a very social club. It gives me skills I can use out of school." 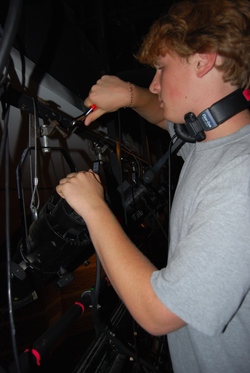 Stage crew president Giulian Garruba, a junior, is this year's lighting designer for "The Comedy of Errors." "I have to do over a hundred lights each show," he says, watching as several other students gather around a light. This involves cleaning and placing the lights, as well as replacing broken or dim light bulbs and programming each one.

Garruba believes lighting to be one of the most important parts of the production. "Lighting brings the elements of the play together," he explains. "It sets the mood. It can make actors look good or bad."

Cutick is assisting Garruba on the lightboard this year. "There are lots of different channels [on the lightboard]. You can save lighting as a que, and then during the play you can type in the que number and the lighting comes up immediately."

On the catwalk, high above the auditorium floor, junior Nora McNally and a handful of other crew members bring down an old light for updating. Kaluta supervises as freshman Gregory Snail unscrews the outer coverings. Snail plans to work on lighting and audio this year, using his experience from a small, middle school television studio.

The stage crew has to incorporate several other aspects besides lighting, though. Sets must be designed, wood must be cut, painting must be done – and everything has to be coordinated. "I like the look of the final product," Garruba says. "I like accomplishing stuff."

The finished set comes after weeks of hard work; much of which is unsafe for inexperienced crew members.

One of the most dangerous tasks in stage crew, using the chop saw, is a necessity for building platforms and other set pieces. No one is allowed to use the saw without Kaluta's presence. 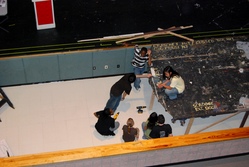 Photo: A view from the catwalk: Members of the stage crew gather to discuss their technical plans.

Photo: A view from the catwalk: Members of the stage crew gather to discuss their technical plans. Photo courtesy of Gili Perl.

Looking at the saw, anyone can see why it is dangerous. A thin plastic cover is the crew's only protection from dozens of tiny metal teeth, spinning too fast to be seen.

No matter what tool is in use, Kaluta is always there to supervise his students' work. "Don't put your hand in the circle of danger," he says, referring to the radius of the spinning blade, as he helps a crew member cut a piece of wood for the platform.

When they do not have the time to make new pieces, the Blair stage crew reuses set pieces from plays past. "We have done important building of our own," Kaluta says, citing the set of "Twelfth Night," which included stairs, multiple levels and a cave. "[But] we reuse stuff a lot."

In addition to recycling, Kaluta receives donated set pieces. He points to a set of French doors used in "The Pirates of Penzance" and a plaster sculpture of the Venus de Milo, both of which professional stage crew designers donated to him.

Kaluta says his own expectations make stage crew difficult. "If I'm going to do the show, I'm not going to do a lame show," he says. "That's why we put in so much time…we reach high."

High school plays usually do not become legendary, but such status is what Kaluta strives for. "Shows at Blair are a cut above. You won't consistently see shows at this level at other schools, and I'm proud of that," he says. "People expect to see a high school show, and they leave going, 'Wow!' "

For the set of "The Comedy of Errors," Kaluta has big plans to bring the action closer to the audience with the use of aprons, the sides of the stage closest to the audience. "[The action] will appear to surround the audience. It is quite effective, since it gets the actors right up close with the audience," he says.

Kaluta first got into the stage crew business as a second grader. "I had to crawl under a stage at six years old and plug in a microphone, and then it didn't work," he recalls. After fixing it, Kaluta recalls thinking, " 'Hey, this is kind of cool!' " He has been running the Blair stage crew since 1992. 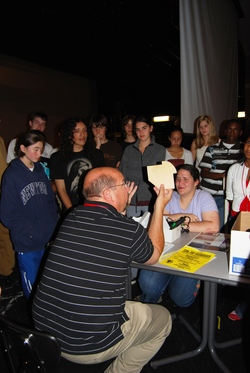 Photo: One big family: Stage crew members gather around Mr. Kaluta as he welcomes the first-timers and lays out the day's tasks.

Photo: One big family: Stage crew members gather around Mr. Kaluta as he welcomes the first-timers and lays out the day's tasks.  Photo courtesy of Gili Perl.

In 2004, Kaluta finished writing "The Perfect Stage Crew," a guide to high school, college and community theater set design and construction. He says the book happened almost by accident, as he was writing a quick note to the incoming Blair stage crew director about how to put together a set. "I did not start out to write a book," claims Kaluta. "All of a sudden, it got longer and longer, then I had 14 pages. The next time I looked up, I had a chapter…I knew enough to write a book, and I knew what books weren't telling everybody."

One of the concepts that Kaluta was sure to stress in his book is that a tremendous amount of planning has to go into set design before anything can begin. Kaluta and Kelly O'Connor, the play's director, frequently make plans to meet during stage crew but, more times than not, have difficulty finding time to talk due to their busy schedules. "We need more coordination," says Kaluta. "We hardly ever get to talk."

For the duo, the set designing process is a long one. "All the [adults] have to agree on a play," says Kaluta. "Typically, you have to learn the play and figure out entrances and exits. You dream up your own set design...I try to find a challenging set design that shows off our strengths, but that is still doable."

Though they do not often get chances to have long conversations about the play, Kaluta and O'Connor seem to share the same passion for the stage, and they have worked together countless times with few major glitches. "We've done so many shows together, we can communicate with few words," Kaluta states. "It saves time."

Much like Kaluta and O'Connor, stage manger McNally works with the students to promote synergy between the cast and crew. "I called the cues during the show," she says. "I was the go-between for the crew and the cast."

With about a month remaining until the premiere of "The Comedy of Errors" on Nov. 2, about 25 students attend the daily stage crew sessions. And with the long list of things to do, time is a precious resource.

Everyone is very busy, securing cross-braces in the orchestra pit, using electric drills to put legs on an upside-down platform and dashing back into the supply closet, looking for tape, drills, screws and safety goggles.

Kaluta keeps the crew busy, watching as they meet the challenges he sets. "To me, it's always great to watch as the kids make something far bigger and far, far better than they ever thought they could do."