The Pandemic and pollution

For the past seven months, our world has been one with cleaner air and fewer cars on the road—hallmarks of a sustainable, eco-friendly future that society has imagined for decades.

How we’ve achieved it, though, isn’t as ideal, because it’s not the result of a climate protection policy. Having killed over one million worldwide, COVID-19 is nothing to celebrate; however, the pandemic has given us a once-in-a-lifetime look at the effects of an unprecedented drop in vehicle use.

The first few months of COVID-19 lockdowns saw worldwide decreases in road traffic. “In China, the reduction could be up to 90%, because the restrictions are more fierce… and no people could go outside for some cities,” Yuan Wang, a climate scientist at the California Institute of Technology and author of a recent study on pandemic air pollution in Chinese cities, says. His study found that levels of pollutants associated with vehicles, mainly nitrogen oxide (NO), dipped accordingly with the drop in driving.

However, NO isn’t the only harmful emission in the air. Others include particulate matter, known as PM2.5—tiny, micrometer-wide particles that mainly come from industry and manufacturing—as well as ozone, a gas that not only blocks UV rays in the atmosphere but also serves as a dangerous pollutant at surface level. Volatile organic compounds (VOC), such as methane gas, are another harmful industrial byproduct.

Ground-level ozone in particular has become a growing problem during the pandemic. It forms through a chemical reaction between NO and VOC, and the ratio between the two gases determines how much is produced. “If one is excessively higher than the other,” Wang says, “then the ozone production will be reduced.” Thus, high concentrations of NO relative to VOC can actually turn down the reaction. “That's what happened in most of the cities in China [before COVID-19] because the automobiles produced a lot of nitrogen oxides that can actually reduce the ozone,” he furthers.

In short, while the fall in NO emissions reduced the presence of one harmful chemical, it led to the rise of another by balancing the ratio between NO and VOC, accelerating ozone production. This process led to ozone increases of 25 percent in cities like Wuhan and Beijing, according to Wang’s study. Because ozone gas traps PM2.5, its increase also furthered particulate matter’s harmful potential. 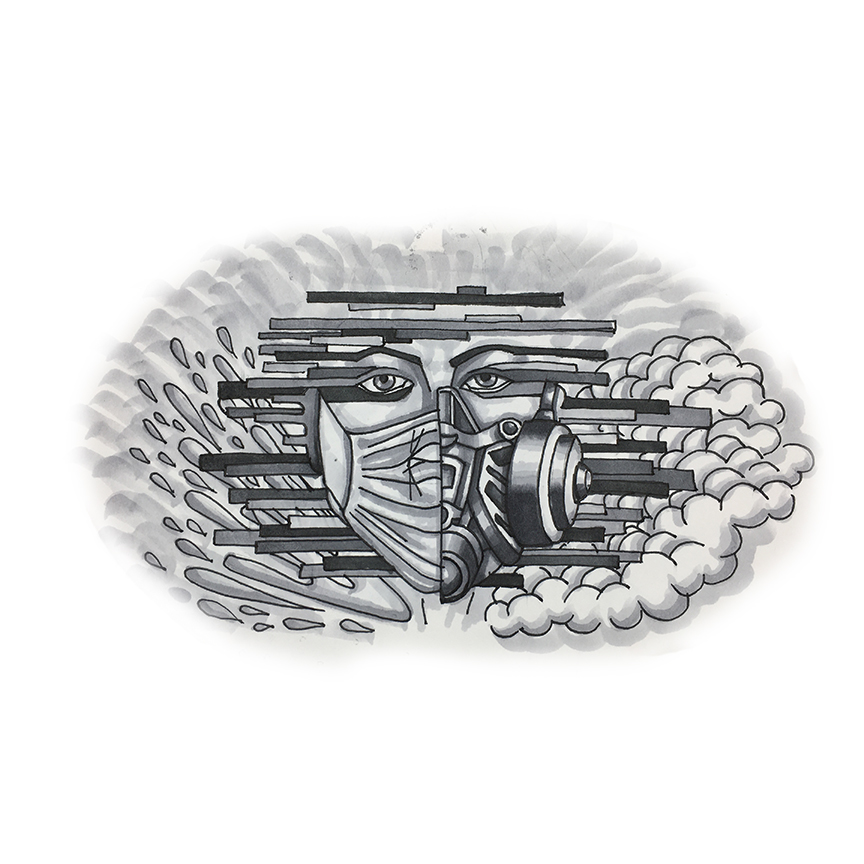 The Pandemic and pollution

Strict regulations on factories and other plants in the United States have reduced levels of industrial particulate matter, and while it still plagues some densely populated areas, other air quality factors are starting to receive more attention. “For most regions, the PM is not an issue anymore. In some urban cities like LA, probably New York, they still have some PM issues. But the focus will probably be some other pollutant like ozone,” Wang says.

Indeed, when he looked at data from his home city of Los Angeles, he discovered ozone spikes similar to the ones he observed abroad. “We do see a little bit of an [ozone] increase, not as significant as China, but there’s still some increase,” he says. “I think the reason is the same.”

Recent wildfires on the west coast have also caused particle pollution to skyrocket. “Every morning we wake up and see the PM values at like 200. The number for Beijing this winter was 150, so we are even more polluted than the worst-case scenario,” he adds.

Maryland is also immensely impacted by poor air quality. According to Maryland Environment Secretary Ben Grumbles in an interview with Silver Chips, airborne pollutants make up a third of the NO entering the Chesapeake Bay and contribute to algae blooms, which are detrimental to marine ecosystems. The Chesapeake Bay Foundation’s Web page explains, “[Algal blooms] cloud the water and absorb the oxygen, creating dead zones in the Bay that cannot support underwater grasses, crabs, fish, and other marine life.”

Additionally, poor air quality has pervasive impacts on health, as confirmed by Susan Anenberg, an associate professor of Environmental and Occupational Health at George Washington University in Washington, D.C. “Pollutants are associated with a range of negative health outcomes, including respiratory ailments, cardiovascular disease, and even early death,” Anenberg says.

The pandemic has given us insight as to what future air pollution policies should look like. While simply reducing driving works for some areas like Maryland, Wang’s study highlights an important lesson for more urban hotspots like Beijing—that without regulations on industry, decreasing traffic can instead be detrimental to air quality because of the increase in ozone production.

However, lockdowns have also shown us the potential results. “Globally, we may reduce about 25 percent of the CO2, carbon dioxide, during March to May,” Wang says. According to the Maryland Transportation Institute in a statement to Maryland Matters, “just a 5 percent reduction in travel demand could lead to a 32-58 percent reduction in traffic congestion,” which then reduces the prevalence of some pollutants, like NO and CO2. Furthermore, the need for better policy is growing, as people worldwide begin to face the effects of climate change firsthand. “There's an increasing urgency, locally and globally, to dramatically reduce greenhouse gas emissions, and it's based on the certainty that impacts to communities and ecosystems are going to get even worse if we don't dramatically reduce our carbon pollution,” Grumbles says.

To address these issues, Maryland’s legislature has committed to two major policy initiatives coming out of the pandemic: increasing both teleworking and electric vehicles for the state.

Grumbles, recognizing the global urgency of air pollution, is confident that these local efforts can have wider implications. “If there isn't leadership at the federal level, and if there are still some areas around the world which need to do much more, it helps to have states like Maryland and local communities like Montgomery County taking action in a responsible way to reduce greenhouse gases and also increase climate resiliency,” he says.