"The Phantom of the Opera" will haunt for years to come

The Phantom of the Opera is here - and not just in our minds. Composer Andrew Lloyd Webber's musical masterpiece "The Phantom of the Opera" has finally come to the big screen with the same heart-pounding organ music that has haunted the Broadway stage for over a decade. It also comes at less than one tenth the cost of a New York theater ticket. 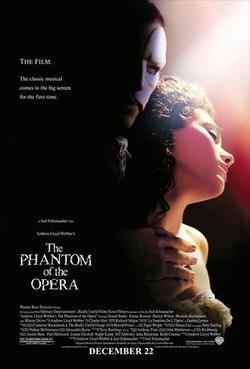 phantom of the opera

Photo: The film has been nominated for three Golden Globes this year.

Photo: The film has been nominated for three Golden Globes this year.

Based on the classic French novel by Gaston Leroux, "The Phantom of the Opera" is at heart a love story. Christine Daaé (Emmy Rossum) is an orphan chorus girl who becomes an opera star with the help of a tutor she believes to be the "Angel of Music" her dying father promised to send to her. This tutor, however, is a man who is none other than the famed phantom that haunts the Opera Populaire. A sadly disfigured and disturbed man who lurks in the labyrinths below the theatre, the phantom (Gerard Butler) will stop at nothing to see that his protégé rises to the top. However, when Christine's dreamy childhood sweetheart Raoul (Patrick Wilson) comes back into her life, everything comes crashing down, including the famous chandelier.

The plot is admittedly melodramatic and contains several holes and leaps of faith, but it is not the plot that makes this film so spectacular. The most enthralling aspect of the film is the same thing that has kept Andrew Lloyd Webber's musical running for so long on Broadway - the music. The score, filled with heavy organ music and dramatic solos, is spectacular.

The music is not the only aspect of the film worth noting; "The Phantom of the Opera" is also visually stimulating. The film begins by focusing on an old photograph, and as the camera zooms in, the picture gradually transitions from the grainy, faded look of the earliest movies to sharp black and white scenes. The movie's first scene is in a dilapidated opera house where items from the once-popular theatre are being auctioned off. The last item, the infamous chandelier, physically breaths light and color into the old theatre as it is hauled toward the ceiling for buyers to examine. As the broken chandelier rises, a wind sweeps throughout the theater that transforms the broken seats and dusty stage back into their color and magnificence from the theatre's heyday.

From this point on, the lavish sets are a feast for the eyes. From the phantom's dark and mystical lair to the grandiose opera house itself, director Joel Schumacher leaves no area unembellished. The costumes complement the setting with their rich colors and intricate design. In short, the film looks like a work of art.

There are a few awkward moments in the movie when characters sing to each other dialogue that would be more naturally spoken. Worse, the songs were prerecorded, and the cast sometimes has trouble with lip-syncing.

"The Phantom of the Opera" has a plethora of strong characters and actors who portray their characters well. Rossum is perfect for the role of Christine. Her performance is flawless, as is her voice, which conquers the incredibly challenging vocal range required without ever seeming to strain. Butler is haunting, and strangely attractive as the Phantom himself; he both attracts and repulses the audience by his evil deeds, which are ultimately motivated by love. However, he has recently come under much criticism for his vocal abilities; though his voice may not have the same qualities as many of Broadway's leading men, the rough quality is appropriate for the role of the phantom. Another strong performance was that of Wilson, as the dashingly handsome Raoul. But handsome or not, any woman would be happy to run off into his arms after hearing his gorgeous rendition of the duet "All I Ask of You" with Rossum.

This film is first and foremost a musical, an art form that does not appeal to everyone. At 143 minutes, it is long and a little over the top, even for a musical. However, the passionate music and elaborate dances are sure to delight any musical theater buff. For the rest of the movie-going world, just a word of warning: most of the dialogue is sung. To all those who don't think they can handle that, "Meet the Fockers" is probably playing right down the hall.

The Phantom of the Opera (143 minutes) is rated PG-13 for brief violent images.