The power of Black Friday

Uniting Americans in their quest for the perfect sale

"Everyone get up!" – It's 4 a.m. and the house is buzzing. The coffee is made, the kids are eating their cheerios and Mom is frantically getting everything together. "Where is my list? I need my list!" By 4:26, everyone is dressed and ready to go. Mom buckles up the kids, jumps in the car and floors it. Ten minutes and three rolling stops later, they have finally arrived. Everyone piles out of the car, running to grab a place in line before the sacred event of Black Friday begins.

Every Friday after Thanksgiving, the same national phenomenon occurs. Families wake up at ungodly hours in the morning to stand in 100-yard lines some 3 people deep. Armed with coffee, carts and plans of attack, they eagerly await the malls opening. Clerks inside nervously watch the clock until it is time to open the floodgates, planning their tactful escapes. Every year it is the same routine: Black Friday successfully turning malls into the Pamplona Bull Run of consumerism. 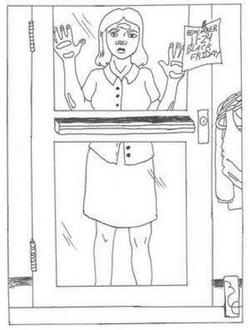 Photo:
Originally dubbed "Black Friday" for its reputation as the day when retailers move out of the red (debt) and into the black (profit), this day is now observed simply as the day to wake up really early and save a lot of money, or even as a way to burn off all that turkey from the day before by shopping 'til you drop. Whatever it is, consumers take absolute advantage of it.

Most have never-ending lists of which stores they plan to hit: Wal-Mart, Target, Macy's, Old Navy, etc. Whether it be for Christmas gifts, for themselves or just to say they bought something for a dollar, shoppers are determined to go to visit all their favorite stores and return home with bags of goodies. Bumping elbows, biting arms, scratching legs, pulling hair, consumers will do anything to get their hands on "it."

Leaving with a feeling of accomplishment, the consumers have not only filled up all those Christmas stockings and then some, they have also bought the retailers their own holiday gifts. Last year alone consumers spent nearly $28 billion on i-pods, big screen TVs, Tickle-me Elmos and other completely materialistic things. Think of all the other things the US could use that money for: paying off 0.003 percent of the nation's debt, buying 280 billion packs of Ramen Noodles to end world hunger or providing Blazers with 5.6 billion IDs.

But what can I say; Americans love their sales. See you Friday!