SCO throws experts to the curb and predicts election outcome

As the election draws near, polling predictions and Electoral College selections seem to bombard us nearly ever hour. To respond to these forecasts, we at Silver Chips Online have devised out own, more scientific results for those Blazers who are simply unsure who will win this heated contest. We have created, using only the most trusted techniques in the industry, eight key tests for the outcome of the 2008 election.

Starting out with a bang
For our first test, we put two different eggs in the microwave, set the timer and let nature take its course waiting to see whether the Obama or McCain egg would explode first. All of a sudden a BANG echoed through the kitchen as the microwave door burst open. Unscarred but hot-headed, the McCain egg awaited us as the remains of the Obama egg littered the microwave and kitchen floor. So far it looked like Obama might not be able to take the heat of the election as he got cooked in this first round.
Score: McCain 1 - Obama 0 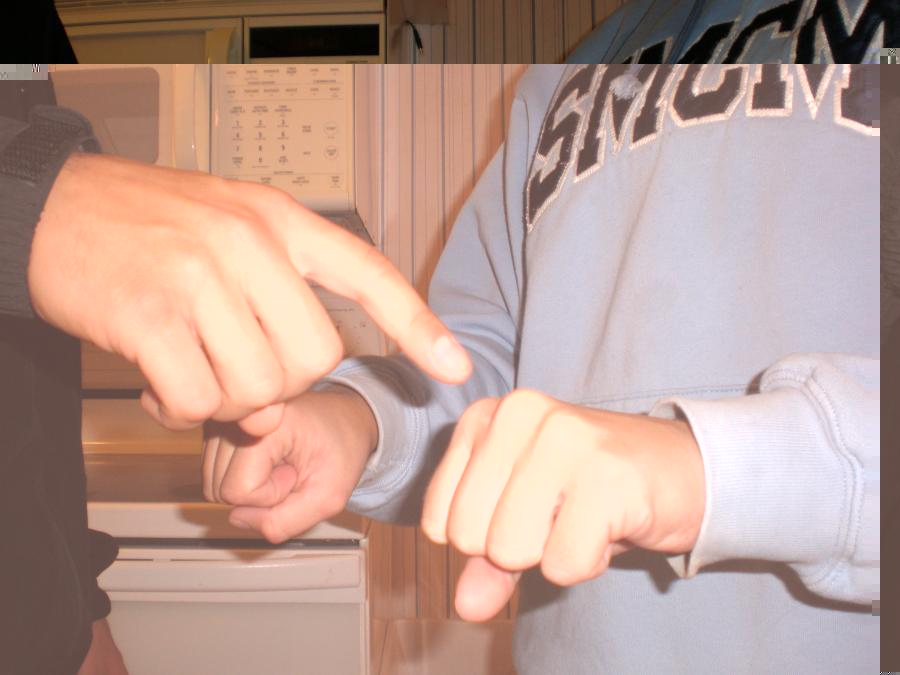 Photo: Lucas chooses which candidate he will represent in the next election test.

Photo: Lucas chooses which candidate he will represent in the next election test. Photo courtesy of Susie Branson.

Running out of steam
Looking to see if Obama would come back with vengeance, our next test discovered which staffer, Susie or Lucas, and thus which candidate could hold themselves together longer. Picking an anonymous piece of paper with a candidate's name on it, we shut out our mouths, held our breath and began the timer. Lucas tuckered out at 34 seconds as Susie stopped after a minute out of courtesy. Unrolling her piece of paper, Susie had won a round for Obama, tying up the race.
Score: McCain 1 - Obama 1

Melting under the heat
With this year's heated 2008 election, Silver Chips Online thought it would be best to cool things down with an ice-melting contest. After both Susie and Lucas chose their hidden candidate-paper, they each received an ice cube to hold in their palm, watching to see whose ice cube would melt the fastest. After a grueling 10 minutes and 47 seconds, Lucas' ice cube outlasted Susie's which dissolved out of the competition at 8 minutes and 50 seconds. Revealing the papers, Lucas, cool and collected, snatched a win for McCain.
Score: McCain 2 - Obama 1 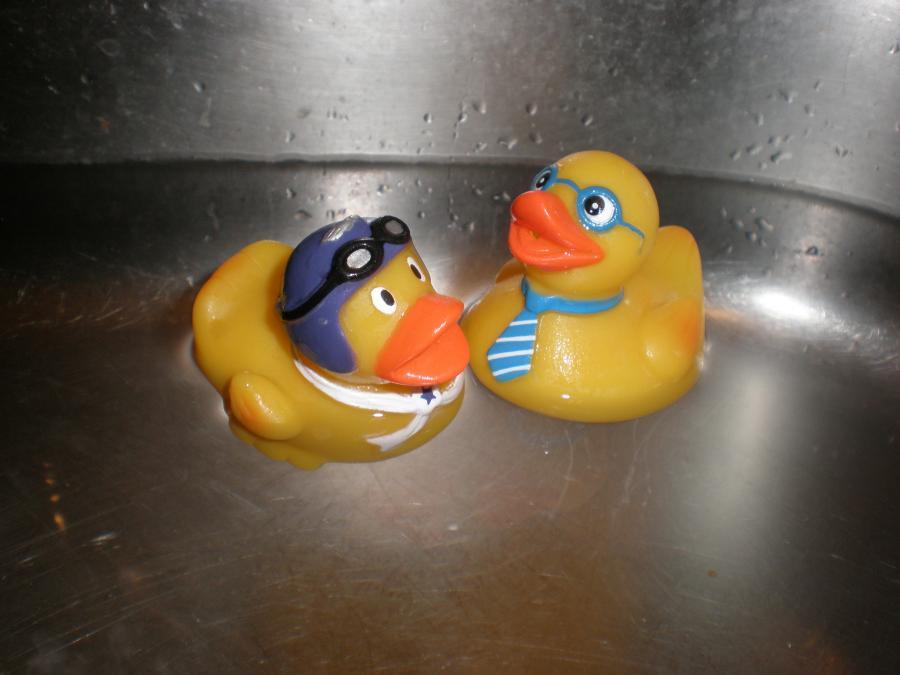 Photo: The McCain duck (left) and Obama duck (right) prepare for their big race across the "pond."

Photo: The McCain duck (left) and Obama duck (right) prepare for their big race across the "pond." Photo courtesy of Susie Branson.

Sinking feeling
To keep the feeling of competition alive, Silver Chips Online set these two candidates to another test: a duck race. Placing two rubber ducks in a sink filled with water, Susie and Lucas worked to blow their duck to the other side of the sink the fastest. Susie's Obama duck, donning a pair of glasses and tie, blew Lucas's McCain-pilot duck out of the water. Obama reached the finish line in a mere 12 seconds while McCain lagged behind, gradually sinking to the bottom.
Score: McCain 2 - Obama 2

Cracking under the pressure
With our mock election race neck-and-neck, Silver Chips Online looked to a classic egg and spoon race to set these candidates apart. With Lucas holding the Obama egg and Susie representing McCain, they took their place at the starting line. As the whistle sounded, both staffers began to bolt across the field when Lucas tripped, sending Obama flying through the air! As Obama lay smashed and gooey in defeat, McCain snatched the lead.
Score: McCain 3 - Obama 2 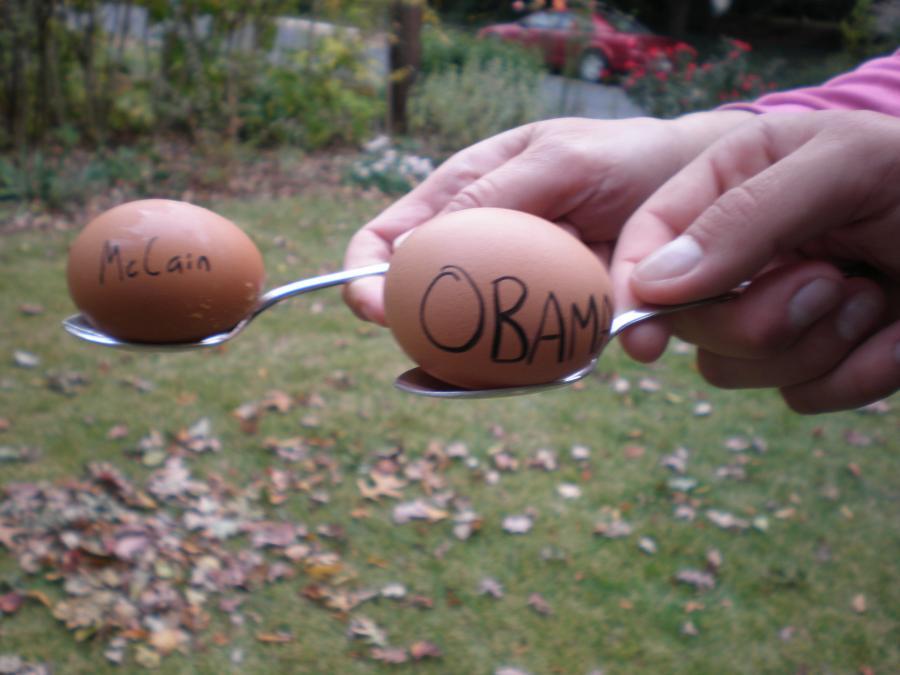 Photo: McCain edges Obama in this close, but delicate race to determine which candidate can withstand the pressure.

Photo: McCain edges Obama in this close, but delicate race to determine which candidate can withstand the pressure. Photo courtesy of Susie Branson.

Running out of juice
As if this election wasn't explosive already, Silver Chips Online looked to spice things up with a creative blast of Diet Coke and Mentos. When combining these two ingredients, a minty-coke sprays from the top of the bottle. Measuring which bottle kept the most liquid after the explosion, Susie and Lucas plopped in the Mentos and let the fireworks go. After examining the calming bottles of fizz, Silver Chips Online concluded that Obama was able to hold himself together for the long haul, leaving the race tied yet again.
Score: McCain 3 - Obama 3

Choking point
In one of the final tests, Silver Chips Online wanted to determine which candidate was more likely to choke in the election, and which candidate could handle the load. Without knowing which contender they chose, Lucas and Susie worked to fit as many jumbo-sized marshmallows into their mouths as possible. In a tear-filled, air-gasping race, Lucas managed to steal a fourth win for Obama by fitting nine marshmallows while Susie came just short, hitting a limit of eight.
Score: McCain 3 - Obama 4

Dog eat dog world
In the last of our homegrown tests, Silver Chips Online took it to the dogs. While Lucas held back the two ferocious beasts, Susie slowly filled-up their bowls, carefully ensuring an equal amount of kibbles. Lucas let loose the leash and before you could say, "President Elect," the two hounds were devouring their dinner. As their jaws came to a halt it appeared McCain had out chomped Obama in this merciless duel.
Score: McCain 4 - Obama 4 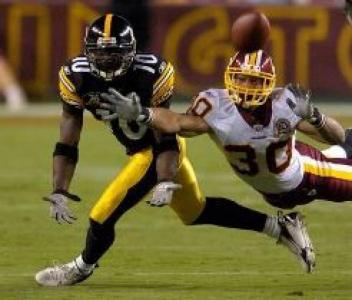 Photo: Tune into the Redskins game Monday night for the political tiebreaker to this exciting presidential probe. Photo Courtesy of the Associated Press.

Photo: Tune into the Redskins game Monday night for the political tiebreaker to this exciting presidential probe. Photo Courtesy of the Associated Press.

Redskins Roundup
With the candidates all tied-up, the last test of this presidential probe will occur Monday night at 8:30 p.m. on ESPN when the Steelers come to town to face the Redskins in a midseason duel. For 17 successive U.S. presidential elections since 1936, the "Redskins Rule" of politics has accurately predicted our next commander-in-chief (except in 2004), and on Monday, the Skins will have another chance at political history. If they win, the rule goes that the incumbent party can take a deep breath as they will keep the White House. If they lose, however, the opposition takes control of the sacred Oval Office. So tune in and buckle up - this could be the game of the season, not to mention a political (and possibly overtime) thriller!
Score: McCain ? - Obama ?

Update: Tuesday, Nov. 4, 2008
With the Redskins taking a hard loss last night 23 - 6 at the hands of the resurgent Steelers, Senator Barack Obama gets the SCO presidential prediction for victory. The loss came after Pittsburgh scored the final 23 points of the game, Washington scored only during the first quarter of play.
Score: McCain 4 - Obama 5

Based on these scientific tests, Silver Chips Online predicts that Obama will edge McCain to win the egg race - er, presidency.