The Pro Bowl stinks… so why hasn't the NFL changed it?

Football's epic all-star game is not that great

Over the two weeks between the conference championships and the Super Bowl, the National Football League (NFL) hosts the Pro Bowl extravaganza. It's just for fun, just like an all-star game in any other sport. The players who performed the best each season are whisked away to a beautiful destination, like Hawaii or Orlando. There, they get to make friends, practice, compete in some recreational activities and finally play a (semi) competitive game. It sounds lovely. It probably is quite lovely for the players. The problem with the Pro Bowl, however, is that it is absolutely awful for the fans.

The Pro Bowl is supposed to feature the "best of the best" from around the league. It doesn't. Players are voted in by the fans, coaches, and players. And every single year, someone on Twitter always starts complaining that a player got snubbed. The thing is that they are often right. For example, there was outrage this year after Green Bay running back Aaron Jones was not selected for the National Football Conference (NFC)'s team, despite tying for the most touchdowns scored by a running back this season. Players are selected for the game based on opposing coaches' and players' perceptions of who are the toughest and strongest players, not necessarily who had the best season statistically. And the fans of course will vote for players on their favorite team. 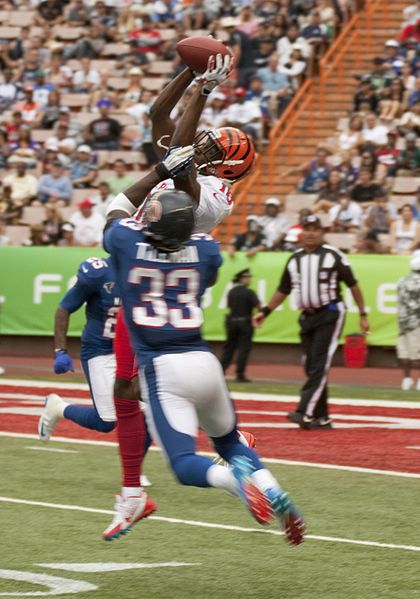 Photo: The Pro Bowl is the NFL's all-star game (courtesy of Wikimedia Commons).

Photo: The Pro Bowl is the NFL's all-star game (courtesy of Wikimedia Commons).

Another problem with the Pro Bowl is that there is no competition: players do not give it their all. When watching the game (which no one that I know did), it's very noticable. This is because the game doesn't matter, so players don't want to get hurt playing for no reason.

Since the game doesn't matter, many football fans choose not to watch the game. The NFL has noticed that so many people just disregard the event. They have taken a couple of steps to address that, including bringing back the skills showdown. The skills showdown is great if you love watching people play dodgeball or throw footballs at colorful targets.

The skills showdown doesn't really have much to do with football at all. It only serves as a way for ESPN to sell more ads and for the NFL to expand their Pro Bowl marketing campaign. The entire week leading up to the Pro Bowl, social media was flooded by the NFL's account posting pictures and videos from the skills showdown and team practice to stir up some more interest.

All of these negative aspects beg the question: How can the game be fixed? Perhaps the league could come up with some sort of prize or reward for winning the game, which would motivate players to try harder. Maybe the league could take a similar path that the NHL (National Hockey League) does. The NHL all-star game is a 3-on-3 hockey tournament instead of a regular game. It's a fun event that provides a break from the season, and is very fun to watch. If the NFL played a more fast-paced, high-scoring game, fans might be more attracted to the event.

At the end of the day, the NFL needs to change the Pro Bowl soon. Please. For all of our sakes.