Blamed for bringing evils, pains and diseases to mankind; heralded as the bringer of fire; and defamed as a swindler, thief and trickster - the immortal Prometheus lived a life condemned to eternal pain and retribution for his thievery and deception. He was a scammer draped in a hero's cloak much like the boards that bear his name.

The new Promethean Activboards, made by Promethean World, that have been installed across the county have the deceptive allure of augmenting education while being secretly wrapped in a large tax bill for an ailing Montgomery County economy. Already facing a $250 million shortfall for fiscal year 2010, the county council approved of a roughly $13.5 million expenditure ($3.364 million per year over four-years) on the futuristic looking boards as part of a $19.6 million technology modification this year for Montgomery County Public Schools (MCPS) according to figures from The Washington Post and Michael Cady, Director of the Department of Financial Operations for MCPS. 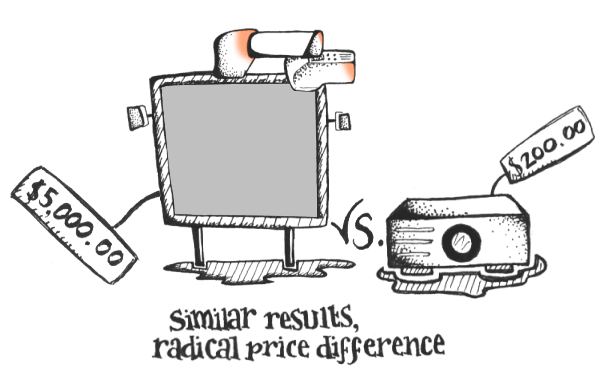 Installed to engage students as well as teachers, the Promethean boards have been installed in 65 percent of classrooms in over 54 schools across the county, according to Cady. While meant to engage, no formal, nonpartisan study has been conducted on the boards to show that students or teachers are more involved in the classroom when a Promethean board is present.

Essentially, a Promethean board is "just a big mouse," Cady said - a mouse with a price-tag of over $5,000 per unit. The boards do, however, have features unused before in the Montgomery County classroom - active vote, interactive interface and stylus pen technology - because they were already integral parts of the classroom. The active vote is simply a fancy word for a quiz; interactive interface, a nice synonym for a dynamic teacher; and stylus pen, a glorious disguise for markers.

Cumbersome, intrusive and overbearing, the Promethean boards, framed in fiery orange plastic, jut out into the classroom with all the inconspicuousness of a mammoth computer from the technologically primordial fifties. Though the boards, if widely accepted, are likely to be refined, shrunk and made more practical in the next 10 to 20 years, the current boards provide limited benefits and offer numerous obstacles.

Blair's Promethean boards have been riddled with problems: defective wires, malfunctioning projectors and faulty speakers. Although these problems are expected of any newly installed technology, the real danger with the Promethean boards is their susceptibility to damage. The boards must be immediately cleaned if written on by a permanent or dry-erase marker otherwise it suffers reduced capabilities. The faulty parts have cost Blair faculty time and effort that could have been spent on instruction and planning. Instead, faculty has been left trying to fix or navigate around board problems.

With five training session, including four, three-hour comprehensive sessions by the county, in the four weeks since installation began many teachers are still in the dark on how to use the boards, even in the most basic manner. Many simply use the boards as a way to scroll through word documents, as an overhead projector or as an Internet projection, capabilities already available on school owned projectors.

The figurative dark is not the only place where the instructors are being left. As teachers begin committing time and resources to basing lessons around the boards, power becomes more of a necessity for education rather than an extra perk. If the power fails, as it did already once this year, the boards go with it as well.

The problem is not only when the boards do not work, but when they do. As concerns for a greener world seem to be a focal point of life from transportation to presidential elections, having 3,000 LCD projectors and Promethean boards humming throughout the school day will undoubtedly raise the electric bill of schools across the county. While the boards might seem beneficial to a county that already uses significantly more paper than other counties of the same size, there has been no reduction in paper usage and there are no plans to order less paper this year, according to Cady.

The Promethean boards have numerous deficiencies and little to offer, but the biggest problem is not with what they can and cannot do. The issue is that the county authorized $13.5 million in nonessential spending during a hiring freeze and time of general economic volatility. The county is willing to spend money it does not have, for a product it does not need. Prometheus may have brought humanity fire, but he also brought Pandora's pain, much in the same manner Promethean World has brought new technology at the price of deeper shortfalls.