While the trudge up to room 243 for the last forty-five minute chunk of the school day is no stranger to Communication Arts Program (CAP) students in Kevin Shindel's eighth period research class, a gang of less than twenty kids, the hall is abuzz on this Tuesday. Shindel stands outside as the final bell rings, to motion groups of stragglers into the room. Inside, the desks are arranged in a wide square. The tables sit in the middle. The room is crawling with students from every year and every dynamic. The class has visitors. 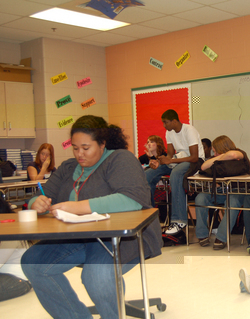 Shindel's research class, composed entirely of CAP juniors, initially decided to have a school-wide discussion after beginning their unit on race relations. "We were trying to have race talks, but we wanted to bring in diversity," says junior Anna Hadfield, an eighth period student. As a result of a broad invitation, some forty-four students—less than half of them from CAP—showed up for a seminar discussion that took place on Tuesday and Wednesday of this week in room 243.

The specific topic on trial these two days was the discussion of the achievement gap between black and white students, although junior Anna Snapp, also a CAP student, is quick to note that the group deviated quickly into a much larger issue. "It turned into talking about stereotypes and why they exist," she says. "We sort of concluded that everyone's a little racist."

As soon as everyone got seated - with chairs, floor space and counter-tops all occupied - Shindel invited in the day's discussion like a broker ringing the bell for trade. He began by asking the students if they wished to break into groups, but this proposition was met with a resounding "boo." The teacher submitted, sitting back to watch the discussion take off. Almost instantly, students clamored for the floor.

Not altogether unlike the Diversity Workshop, hosted earlier this year by Blair seniors Claire Kalala, Brettney Oke, Ana Palomino and Martecki Martey, the seminar to discuss the achievement gap discussion invited a lot of emotion. Comments ran the gamut from personal anecdotes regarding racism and stereotypes to more objective analysis; some students had brought in articles to present to their peers and incite commentary. Most importantly, however, everyone present had a chance to say something.

Kalala, a vocal presence in the debates and a leader of the in-school Diversity Workshop, finds the discussion valuable because it draws attention to topics many students simply glaze over. "You see how people were like fighting to speak," she says, "These issues are being hidden." At one point in the class discussions, Kalala made a point to invite everyone present to attend Diversity Workshop. Martey agreed, noting that in Diversity Workshop, many of the same issues are discussed on a regular basis.

During a brief pause from the flying arguments and analyses, Shindel invited the entire class to an end-of-discussion party held on Thursday in room 243, during which all the students present got a chance to mingle and enjoy one another's company free from any discussion of race. "We don't discuss things like this enough in this setting," he says, referring to the achievement gap, "But I think we should just get to know us—not as blacks or Latinos or whites, but just us. How often do we get to do that?"

There's a resounding chorus of 'Never!'' from all corners of the room. Even as they can't settle on a reasonable way to bridge the world's racial problems today, at least this crowd could all agree on something.