The rainbow of "Gray Matters"

"What happens in Vegas stays in Vegas," unless you are Gray (Heather Graham). For her, one night in Vegas carries emotional baggage back on the plane ride home, teaches a valuable lesson about homosexuality and intrigues the audience with new twists. Unfortunately, her spastic persona throughout the process of self-discovery, in addition to the quirks of those around her, detracts from the overall quality of the movie.

Gray and her brother Sam (Thomas Cavanagh) are unusually close, sharing a cozy loft, going out together regularly and finishing each others sentences. Tired of being mistaken for a couple, the two decide to get back out into the dating game. They start their search at the dog park, where the gorgeous Charlie (Bridget Moynahan) just happens to be. Gray approaches her for a little pre-interview before signaling for Sam to "come in for the kill." One day later the three are on their way to Vegas for Sam and Charlie's wedding. 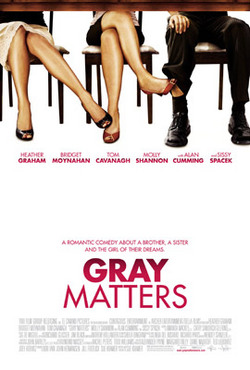 Photo: "Gray Matters" is a romantic comedy with a twist. Photo courtesy of Yahoo movies

Photo: "Gray Matters" is a romantic comedy with a twist. Photo courtesy of Yahoo movies

What follows is Gray's whole life turning upside down as she realizes that she is "Gray without the 'r'" and madly in love with her brother's love interest. And as she tries to figure out just what to do about it, the audience cannot help but watch as new twists continually create funny moments and a more complex storyline.

The plotline of "Gray Matters" is a nice change from the usual romance comedy. Instead of the typical story of the man and woman in a complex love story who end up together in the end, Sue Kramer (writer and director) presents a brother and sister who are so compatible that they fall in love with the same woman. The issue of homosexuality is not made light but, rather, is addressed as acceptable and common. Kramer's writing is superb and has just the right amount of jokes and humor. It also sends a good message to the audience about supporting homosexuality and being comfortable with who you are: a bit cliché, but nice nonetheless.

Despite the plotline, the acting hinders the movie as a whole. Most of the characters, Gray and Sam included, have such pinpoint, over-the-top personalities that by the end of the movie they come off as annoying. While this may have been exactly what Kramer was looking for and, therefore, not the fault of the actors, it takes away from the quality of the movie. Cavanagh tends to talk too fast and in a staccato manner. This works when Sam first meets Charlie and is too nervous to talk normally, but not in most other situations. Graham is constantly frazzled, causing some laughs, but her antics turn tiresome and contrived as she continually ponders over her sexuality and confuses herself more than necessary.

Despite the so-so acting, "Gray Matters" will keep the audience guessing what the next twist will be for the entirety of the film.