The Ravens' 40-14 win leads them to the playoffs

The Ravens beat the Jaguars for a third win.

The Baltimore Ravens (9-5) beat the Jacksonville Jaguars (1-13) on Dec. 20 by a score of 40-14. with the Ravens' offense overwhelming the Jaguars' defense. With their three-game winning streak, the Ravens were looking at a strong lead that's boosting them into the playoffs this year.

A safety and a touchdown by Ravens' receiver Miles Boykin gave the Ravens an early lead of 9-0 in the first quarter. By halftime, the Ravens had a 26-0 lead against the Jaguars after quarterback Lamar Jackson's 11-yard touchdown pass to receiver Dez Bryant. In the third quarter, the Jaguars' quarterback, Gardner Minshew, completed a pass to running back James Robinson in the first possession of the third quarter, diminishing the 26 point lead to a 19 point lead with the score at 26-7 and giving Robinson his 10th touchdown of the season.

The Ravens, however, responded immediately, bringing back their 26 point lead with a touchdown by Jackson with about 4 minutes left in the quarter. In the fourth quarter, the Jaguars' deficit then increased to 40-7 when Jackson completed a 3-yard pass to Mark Andrews for a touchdown. The Jaguars also bounced back with a touchdown from a pass from Minshew to wide receiver Chris Conley. However, the Jaguars still came out defeated at the end of the fourth quarter, the final score at 40-14. 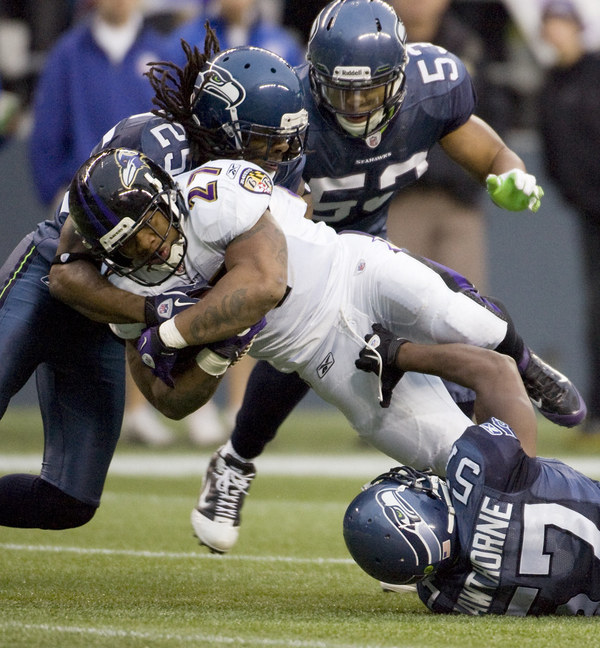 Photo: This game proved tough for the Jaguars (Image courtesy of Creative Commons)

Photo: This game proved tough for the Jaguars (Image courtesy of Creative Commons)

One of the things to notice was that the Jaguar's normal punter, Logan Cooke, actually missed the game because he had gotten sick, so kicker Aldrick Ross punted instead for the first time in his career. Additionally, there were two injuries for the Jaguars: wide receiver Collin Johnson in the first quarter and Robinson in the fourth quarter.

Ravens' quarterback Lamar Jackson, the league's Most Valuable Player in 2019, was the star player as he completed 17 of 22 passes and 3 touchdowns. His touchdown in the third quarter basically secured the win for the Ravens just as Jacksonville was starting to gain points.

Because of the pandemic, Blair sports have been paused for the health and safety of students and staff. Games have been canceled and most sports practices are virtual. To make up for the lack of Blair sports, many are drawn to pro sports, so don't forget to tune in for the playoffs, which will start on Jan. 9, 2021. Although the Jaguars didn't make it, the Ravens will be playing in the playoffs.


Tharindi Jayatilake. Hey, I'm Tharindi [she/her] :D Besides writing for SCO, I participate in Blair theater. In my free time, you can find me dancing or listening to music. More »