With eight of its 21 galleries open, no number of space clichés can do the flagship Smithsonian museum justice 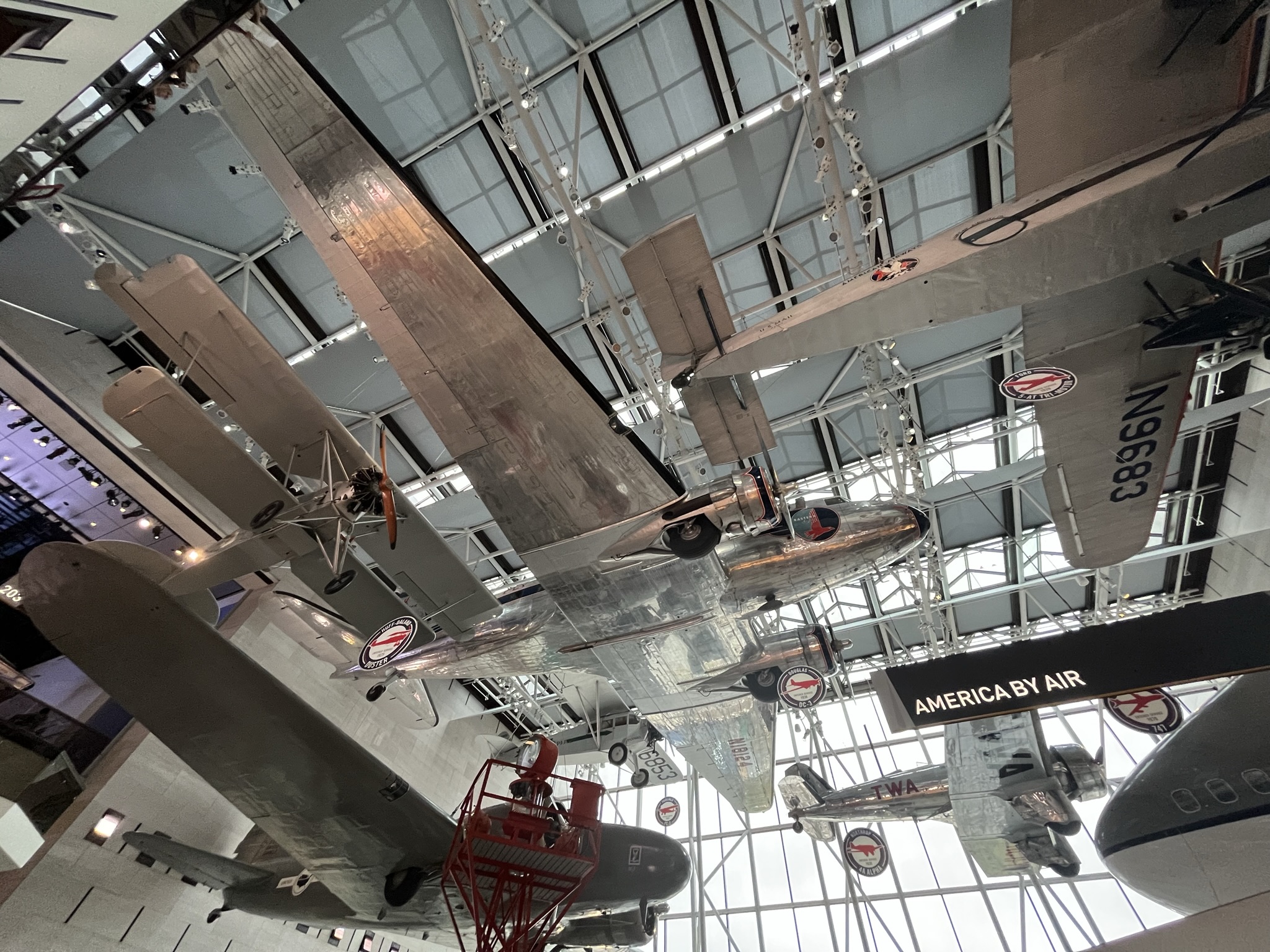 Photo: Planes hang from the ceiling of the America by Air exhibit.

Photo: Planes hang from the ceiling of the America by Air exhibit. Photo courtesy of Nicholas Bourg.

For the first time since 2018, the world-renowned Smithsonian National Air and Space Museum on the Mall in downtown DC has reopened — partially. After four years of construction, around a third of the completely redesigned building is open to the public.

Despite only showcasing eight exhibits, the museum checks all the mesmerizingly high boxes expected from Smithsonian flagships. The remaining two-thirds of the building is encased in scaffolding amidst a seven-year, $1 billion renovation set to complete in 2025.

There is a noticeable focus on showcasing unheard stories and voices in the Air and Space field, especially women and people of color. An entire gallery in the Destination Moon exhibit was dedicated to Katherine Johnson, the NASA mathematician whose story was featured in the movie Hidden Figures.

Dr. Jeremy Kinney, the Associate Director for Research and Curatorial Affairs at the museum, explains the conscious decision made to increase representation in the museum's exhibits.

"That is a commitment that we've made to do that so all our visitors can see themselves [represented]. And what the renovation of the building and the transformation of our exhibits is enabling us to do is to take those stories… and put them in a format so our visitors can experience that and see that and hear those stories of those people, too," he says.

On Oct. 24, SCO toured all eight exhibits of the museum. Here are the highlights.

After unceremoniously walking through the building from the back entrance, you are greeted with the trademark Smithsonian jaw-dropping main entrance. Looking up, there are a half-dozen aircraft suspended in midair from almost invisible wires. Hung at different elevations, the perfectly restored planes make use of every foot of three-dimensional space in the vast, sunlit atrium. The massive cockpit and nose of a double-decker 747 protrude from the eastern wall while its similarly colossal engine sits on the ground next to it. 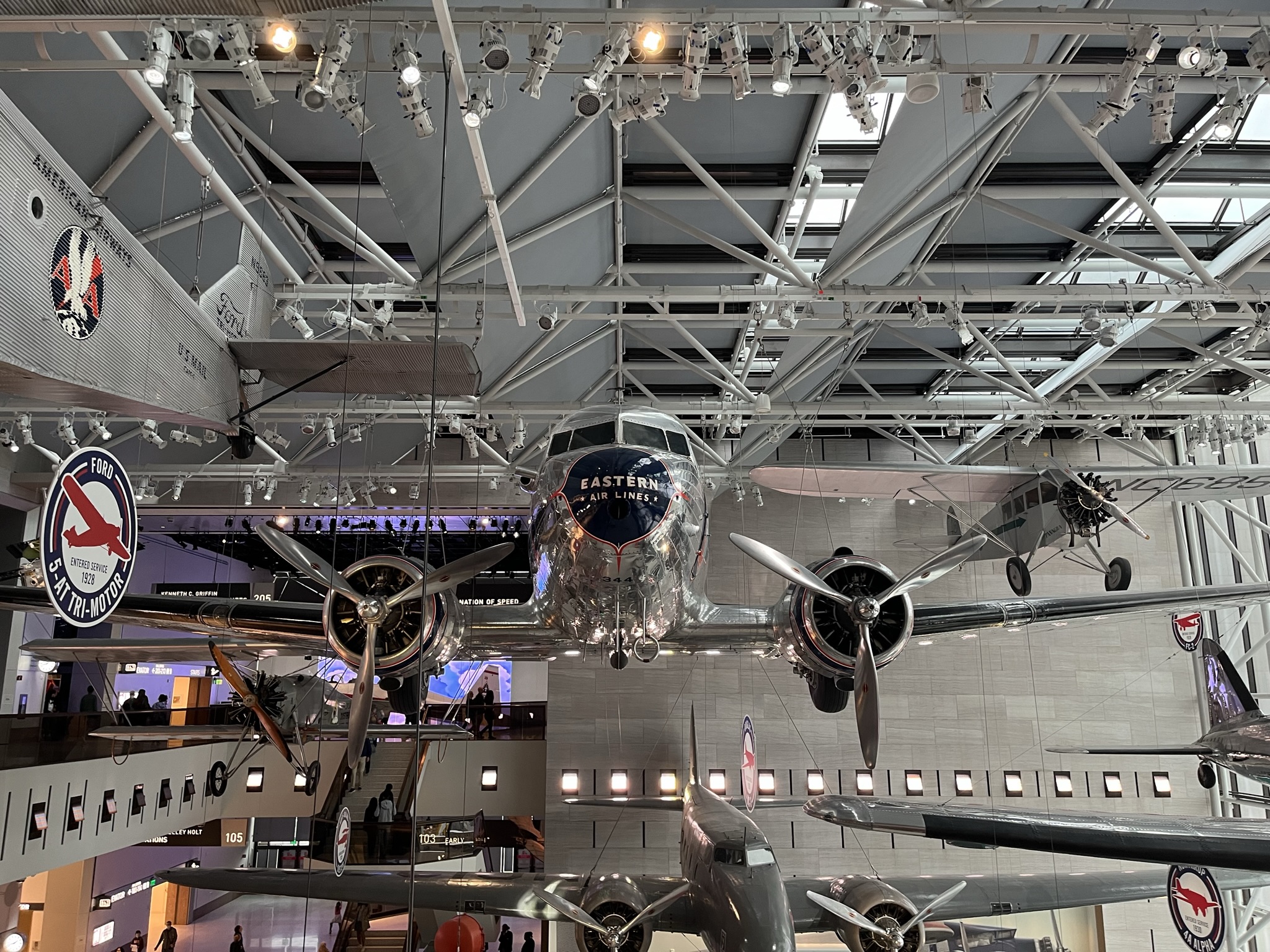 The atrium is actually one of the eight exhibits, called America By Air. It demonstrates how commercial aviation has changed by displaying the aircraft through different generations. Kinney explains the creative vision behind this exhibit. "The inspiration was to show all the cool, neat stuff, in a way, but to also show how the technology has changed. But also to show, you know, when we're talking about artifacts, we're talking about full-sized airplanes," Kinney says.

Packed throughout the atrium floor are other attractions, like a huge cross-section of a jet engine, an in-cockpit perspective of a takeoff from Reagan Airport and walkthroughs of plane cabins. Awesomely, the actual, full-sized T-70 X-Wing fighter plane flown by Poe Dameron (Oscar Isaac) in Star Wars: The Rise of Skywalker flies among the historic planes in the atrium.

When first walking into the Nation of Speed exhibit, you might be slightly confused. Parked right in front of you is an antique black Corvette — which obviously stands out in an Air and Space museum. This is because the entire exhibit is dedicated to humanity's quest to go faster and faster. Historic race cars, missiles and a motorcycle line the walls, but at the center of the room are three gigantic engines that include an original from the famous Blackbird stealth plane.

Next to the descriptions of each engine are black buttons. When pressed, its corresponding engine emits a 10-second-long bone-shaking roar that mimics the actual deafening sound of each engine. 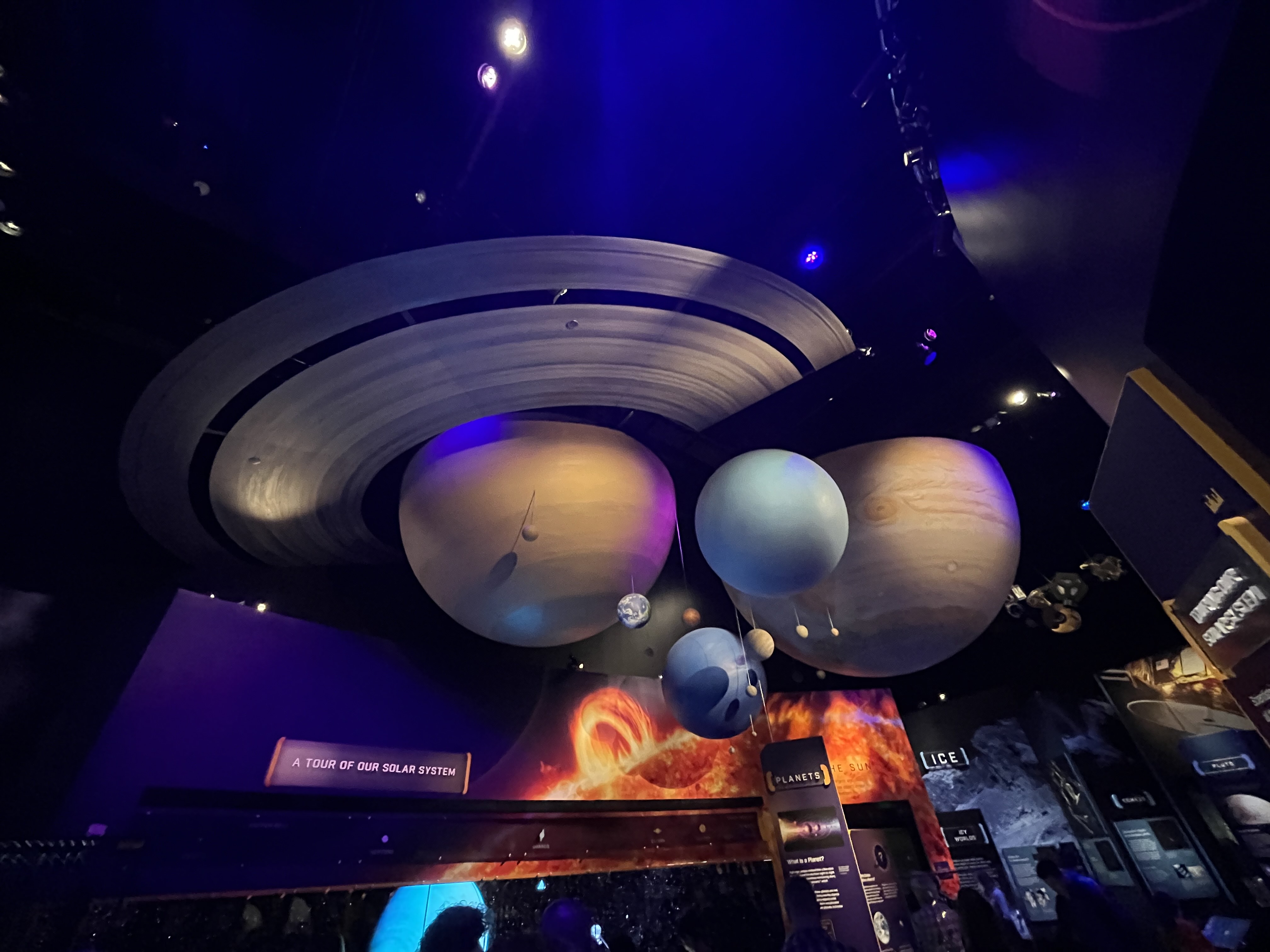 Planets in exploring the planets

Photo: Planets hang from the ceiling of the Exploring the Planets gallery.

Photo: Planets hang from the ceiling of the Exploring the Planets gallery. Photo courtesy of Nicholas Bourg.

Any air and space museum would be incomplete without an exhibit dedicated to the Apollo moon landings. "Destination Moon" takes this above and beyond. Neil Armstrong's complete space suit and the Columbia, Apollo 11's command module, take center stage. Other less significant but still intriguing artifacts, like Armstrong's space shaving kit, are also featured.

The exhibit also features artifacts from the two programs that predated Apollo — Mercury and Gemini. Like the Apollo section, command modules from Mercury and Apollo missions are on display, both displaying burn marks from re-entry.

The other five exhibits are definitely worth a visit as well. One World Connected explores how technology like satellites, undersea cables and fiber optics allow humans from all over the world to connect with each other. Early Flight details the era of spaceflight between the Wright brothers' first flights in the early 1900s and the start of World War I, one of the first wars involving planes. 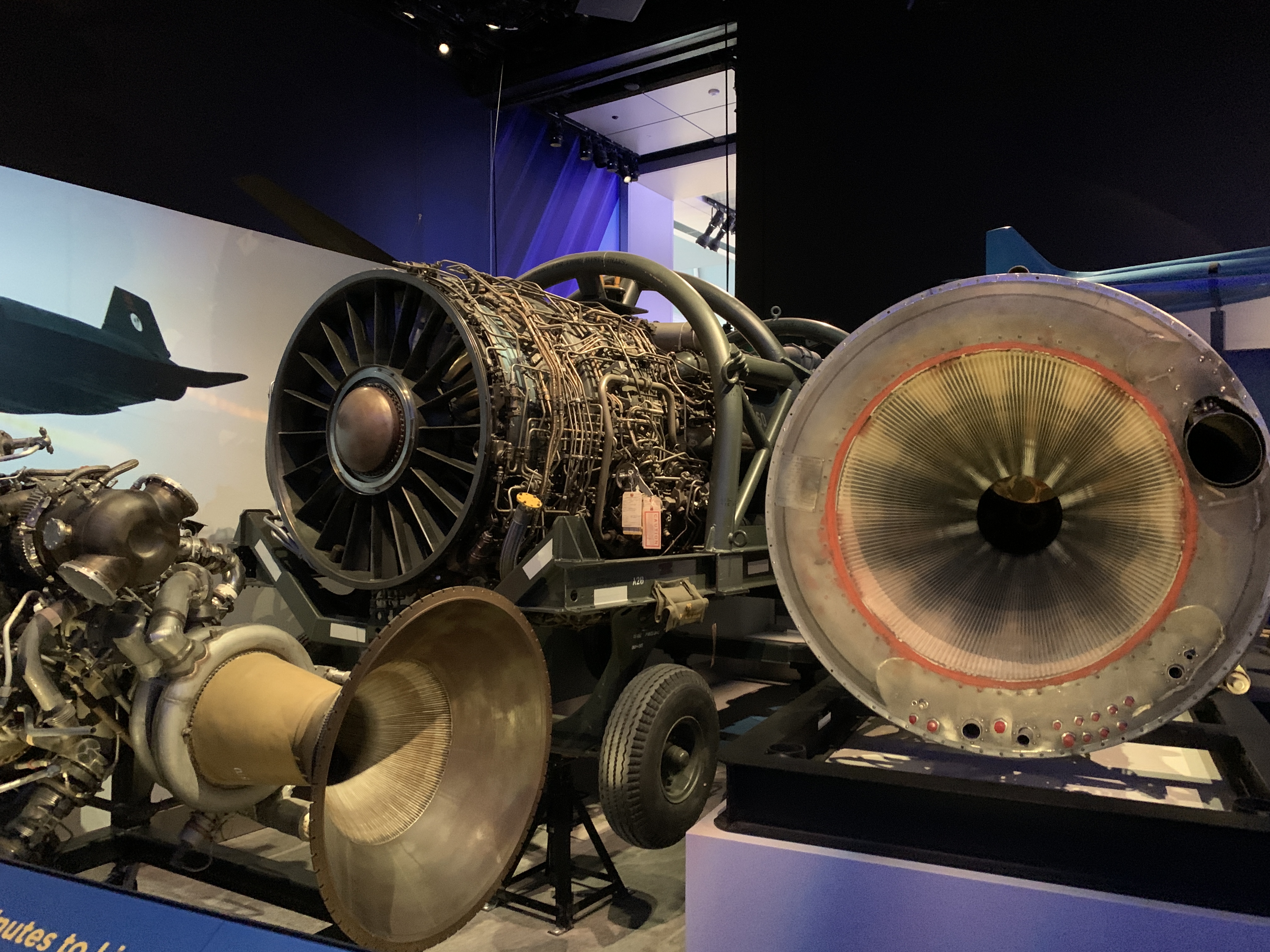 Engines in the Nation of Speed Gallery

Photo: Engines which you can push a button and hear roar are exhibited in the Nation of Speed gallery.

Photo: Engines which you can push a button and hear roar are exhibited in the Nation of Speed gallery. Photo courtesy of Nicholas Bourg.

The Kenneth C. Griffin Exploring Planets Gallery features test models and life-scale replicas of spacecraft, including the Curiosity Rover that landed on Mars in 2011. The ceiling is adorned with multicolored replicas of planets and their moons orbiting the sun. And with a planetarium in the middle, the exhibit proves how learning about other planets can help us better understand our own.

The Thomas W. Haas We All Fly exhibit displays the many applications of flight in human life, providing information about everything from police helicopters to Amazon delivery drones. Wright Brothers & the Invention of the Aerial Age showcases the original Wright Flyer, the plane that Wilbur and Orville Wright built and flew for the first manned flight in the Outer Banks of North Carolina. It details the Wright brothers' process for inventing the plane.

With only four years of the $1 billion renovation complete, we can only wonder what is hiding behind the scaffolding that covers the other two-thirds of the Smithsonian's most iconic museum.

Kinney briefly touches on the exhibits still being built. "You'll see galleries dedicated to military aviation centered off World War One, World War Two, the Cold War and after, as well as broader themes in the history of spaceflight… the space age, the experience of living in orbit of earth, space stations, space shuttles and then a gallery dedicated to the future of space."