The return of Ask Chips

With more madness and blasphemy than ever before

We're back! After a two-year hiatus - due to lame bureaucratic incompatibilities - the A.S.K. (that's Anika, Sean and Kevin, your resident geniuses) combination has fought valiantly and triumphed in an emotional war for a new (potential) round of Ask Chips. For those of you who remember us, yay! We hope you're as excited about our return as we are. For those of you who have no idea who we are, that is perfectly fine - you'll learn quickly. So, without further ado, let's answer some questions!

Sad asks, "Whatever happened to Ask Chips? My life is falling to pieces without it. Do you recommend clowns to cheer me up or Zoloft? Or just an old-fashioned visit to a psychiatrist? Help!"

Whoa! Chill your face. We're back, no need for a psychiatrist; we're here to help. And no clowns. Clowns are creepy and will make things worse. And unless you're a white, bouncy thingy with a rainy cloud over your head - er - body, then Zoloft will most definitely not help you.

If you seriously need to be cheered up, this always does the trick for us.

Sean Mbachu asks, "Do you guys get a joy out of answering our unworthy questions (like this one I suppose)?"

Normally yes, Mr. Mbachu, but for you we'll make an exception.

You have saddened us with your question. We are in a state of the utmost melancholy. Even beautiful sunny days and a field of perfect sunflowers cannot halt the flow of our tears.

Tried to Hide His BIG secret asks, "The school has a lot of money to buy all these latest technologies. So why in the male restroom there ain't any dividers for the standing toilets?"

Well, whenever you add something to a boy's bathroom, you have yet another distraction from the task at hand and there is inevitably, one more thing to clean, whether that is a wall, a sink or even the ceiling. Given the aim-challenged Blazer population, these dividers would be on the cutting edge of bathroom privacy, but would be yet another thing in the bathroom that we would feel uncomfortable breathing around or touching.

BNC is hot and fresh in the beginning but it gets old and stale really fast (see the "300" spoof they put on InfoFlow). That does not mean BNC's all bad; even when dry, it's Franalicious. Like many cookies, BNC is nutty - sometimes even fruity. That five-second rule also applies to BNC because they can correct live editions of InfoFlow without much harm (hey, just play it after 5B).

T-man with a t-plan asks, "If you only have one eye, are you blinking or winking?" 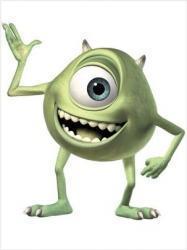 Photo: Hey baby, although it may look like I just blinked, I was really winking. Photo courtesy of Walt Disney Pictures.

Photo: Hey baby, although it may look like I just blinked, I was really winking. Photo courtesy of Walt Disney Pictures.

Good question, T-Pain. It all depends on intention. If someone said, for example, "I am awesome," and Cyclops is trying to convey that said person is not quite right in the head, then Cyclops would blink at them. If, however, Cyclops just dropped a really good pick-up line (like Sean does on a regular basis) and whatever one-eyed hottie glances at him seductively, Cyclops would wink. Ultimately, it's all in the unibrow, baby. *wink/blink*

Anika's edit: Sean is so full of it.
Sean's edit: And they love it.
Kevin's edit: Shut up.

Jessica asks, "Is it wrong to date somebody three to four years younger than you?"

Legally, you can date anyone you want. You can even take a tree out on a romantic date in the park. Or, if you prefer, you can bring a kindergartner to a PG-rated movie. However, you know the law. If your intentions are more physically inclined, then...technically three or four years is still okay. Better yet, just wait until you hit sixteen, then everything will be [redacted].

Desperate!! asks, "OK so there's this girl that I like, right? But I don't know if she does also. How can I tell? And should I just ask her out if she does?"

Anika: Okay, so does this girl stare when you're not looking and when you turn to look at her, she blushes and looks abruptly away? When you sign into instant messager, does she IM you a second later? Does she laugh at all your dumb jokes? Does she lingeringly touch your arm or another seemingly nondescript body part? Have you ever caught her daydreaming, and every once in a while she licks her lips and sighs? Actually, never mind the last one. If most of these apply to your honey, then she probably likes you. Also, if this girl is your best friend, you better be pretty darn sure she likes you because if she doesn't, it'll make your friendship really awkward and you don't want that, do you?

And if this girl is a not-so-close friend, then you should ask her out on one condition: if she's ready for a relationship at the moment. If she isn't, you should still definitely talk to her about it. Come clean about your feelings and discuss what you both want in a mature manner. Be sensitive towards her feelings. If you think this one is special, don't let her get away!

The llama of doom asks, "Can procrastination be medicated? If so, when will it be available over the counter?"

The scientists who would be trying to make a breakthrough in this field are way too busy playing "Brawl" to further their research. Sorry, bro.

Silver Chips Online does not endorse anything in this article. If we have offended you, we are so, so, so, so sorry.