This past Saturday, Auburn quarterback Cam Newton won the 2010 Heisman Trophy for the most outstanding college football player in the U.S. But Cam's celebration was slightly marred by the controversy surrounding the supposed scandal that took place before he actually began attending Auburn. Whether Cam had knowledge of the scheme or not cannot be proven, but one thing is for certain - he deserved the Heisman. 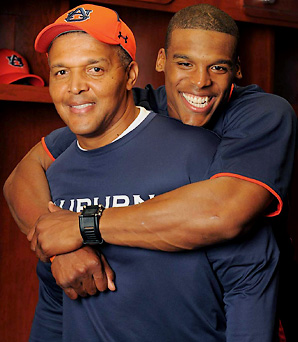 Photo: Even with the ongoing investigation into Cecil Newton's actions, Cam Newton has stood by his father throughout and made several statements concerning his father's role.

Photo: Even with the ongoing investigation into Cecil Newton's actions, Cam Newton has stood by his father throughout and made several statements concerning his father's role.

Here's a little background. According to the National Collegiate Athletic Association (NCAA), Newton's father, Cecil Newton, was involved in a "pay-to-play" scheme in which he told Mississippi State University coaches that it would take "more than a scholarship" for his son to attend and play for their school. According to ESPN, Cecil Newton asked for a six-figure payment before Newton would agree to his son signing with Mississippi State, which never happened since Cam ended up signing with Auburn University. After an investigation into Cam's role himself, the NCAA determined that there was no specific evidence tying Cam to the "pay-to-play" scheme and subsequently cleared Newton to play. Cam has been quoted as saying to the press, "Everything I've done at this university [Auburn], I did it the right way."

Comparisons have already been made between Cam Newton and New Orleans Saints and former University of Southern California (USC) running back Reggie Bush, who forfeited his 2005 Heisman Trophy this past September. Bush gave back the trophy after an investigation discovered that he had received gifts and money from agents, a violation of NCAA policy.

However, the scenarios of Bush and Newton entail completely different circumstances. Firstly, there was solid proof that Bush received money and gifts. In Cam Newton's investigation, the NCAA found that despite Cecil's involvement, Cam himself had done nothing wrong, making him eligible for the Heisman.

Some argue that it is impossible that Cam was completely unaware of his father's attempted scam, even if he did not actively take part in it. Others argue that even if Cam wasn't directly involved, he should still be punished for his father's depraved actions. Cam Newton has told the media that he had not discussed the situation with his father but that he knows that "he [his father] has my best interest in mind."

The Heisman trophy has nothing to do with this investigation but has everything to do with a player's performance on the field. In a group of talented players, Newton stood out; he threw for 28 touchdowns and 2,589 yards passing. On top of that, Newton's 1,409 yards rushing and 21 rushing touchdowns should be enough to convince even the most hesitant critics that his overall performance was more than worthy of the Heisman trophy.

Cecil Newton's actions have severely damaged his son's career, whether Cam chooses to recognize that or not, but people shouldn't associate his father's actions with Cam's play on the field. The only thing that matters is that the Heisman Trophy for being the most outstanding player in college football was awarded to the right person—and in this case, it definitely was.