The rise of DECA Club

Blair's business club prepares for their national competition in Orlando

"The three R's of organization: Responsibility, Roles, and Rinformation," junior Peter Zhang starts his presentation on organizational structure with a bit of his classic DECA humor. DECA is a world-wide organization that prepares emerging leaders and entrepreneurs for careers in marketing, and finance. Zhang, along with 11 other club members, is preparing for the pinnacle of the DECA season: a four day national conference in Orlando, Florida. But making it to the conference wasn't as simple as signing up and going. Blair's business club has been around for only one year, only a single season for the school's squad to have one of the most successful delegations in the state of Maryland.

On the outside, the DECA club doesn't seem to have anything special. Every other Wednesday they huddle up in portable six for presentations on various business topics such as economics and marketing. However, a lot of effort went into the club that is not seen by the average observer. It's an operation that started back over the summer of 2017, when several friends, including junior vice president Alyssa Ma, had the idea to start a DECA delegation at Blair.

"My friends and I got the idea during the summer after my freshman year to start a DECA club here at Blair," Ma says. "At the beginning, it was hard to find a sponsor who was willing to put time and energy because actually this is a horribly complicated club." Mr. Lynch, the current sponsor, was finally found after months of searching for a proper adviser. From there, the club took off, gaining several new members in the first couple of months. Currently, DECA has about 20 members, 14 of which qualified for the national competition. The competitions involve several simulations that test the members on their business knowledge. Throughout the year, the club studies using various practice tests provided by the national DECA organization. 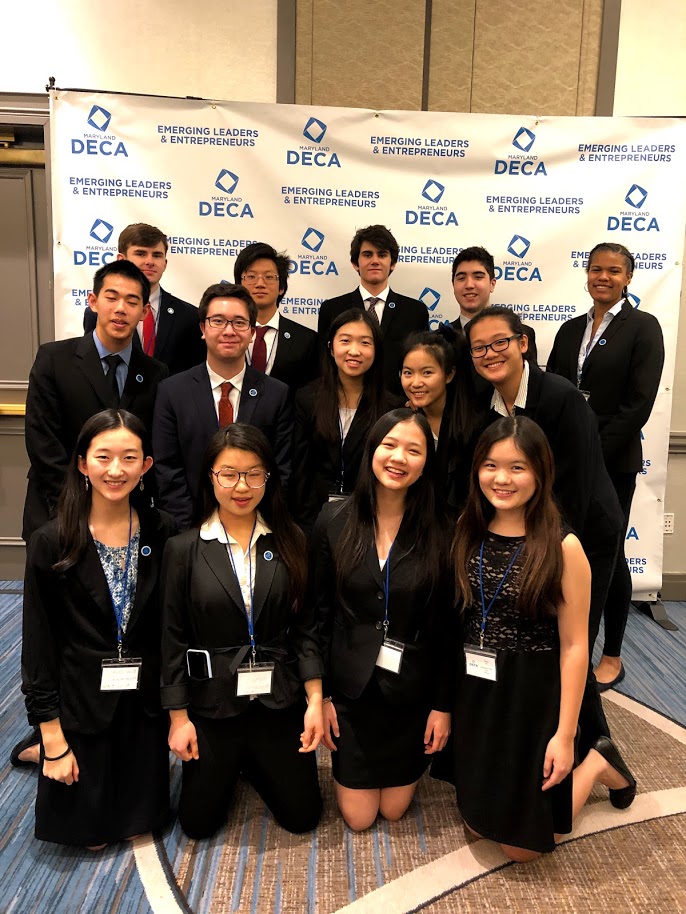 The club decided to take it slow for the first competitions, not expecting to make a big splash in their opening year. "Our goal at the regional level was to establish ourselves as a new chapter of DECA, but then for states it was mainly just to gain experience," Ma says. When the results came back, Ma was stunned, yet glad that their hard work paid off. "This club is hard to run in general. I'm just proud of how far we've asserted ourselves into this prestigious organization."

DECA brings together a diverse group of students, made up of students of all different walks of life. According to sophomore vice-president Joy Xu, "We're planning on reaching out to businesses and helping our communities through public service projects and community service."

Business is a dying course for high schools across the country, but DECA is one of the ways where teenagers can learn about beneficial finance skills that will help them later on in life. The club teaches students about the values of entrepreneurship and financial literacy through the lens of bigger companies such as Google and Apple."This stuff is really interesting and I really love doing the competitions where I get to use some creativity along with problem solving," Xu says.

As they begin their final preparations for their April trip to Orlando, the club is shining brighter than ever. The members joke around, making the room warm with laughter during a break from Zhang's presentation. As soon as he begins, they fall silent, fully engaged in the topic of the day. A perfect mixture of fun and work.

DECA's fantastic inaugural season will be capped off in Orlando, but Ma is still looking for new members. "If you're really passionate about business or you want to learn more about it, this club offers a great way to experience it and also wonderful possibilities for high school and for your future," Ma explains as the meeting comes to a close.

The three D's of DECA are simple: Determination, Diligence and Denthusiasm.