Despite being the joke of American sports, the MLS has maintained a healthy fan base

On a rainy day in Foxborough, Massachusetts, the stage was set for the first ever MLS Cup. The Galaxy and United finished with the second and third most points in Major League Soccer (MLS) respectively during the regular season. United had already overcome Supporters' Shield1 winner Tampa Bay Mutiny in the best two-out-of-three semifinal, but the Galaxy still looked like the odds-on favorite.

The championship game got off to a quick start, as Galaxy striker Eduardo Hurtado scored just five minutes into the game.

Photo: Logos of the 10 teams that were part of the inaugural MLS season.

Photo: Logos of the 10 teams that were part of the inaugural MLS season.

Goals in the first MLS season were not a rarity. In its 32-game season, each team found the back of the net at least

The MLS switched to typical penalty shots when current MLS Commissioner Don Garber arrived in the middle of the 1999 season. Garber's first initiative was to regain the dwindling support of the grassroots. "We have to go back and shore up our existence with the core soccer fan," he said in response to the negative feedback from American soccer fans. This has meant sticking closely to international rules, which includes playing to ties in regular season games and using a game clock that counts up instead of down.

Now outlawed as well, playoff games in the MLS formerly went to a golden goal2 extra time period if tied at the end of regulation.

After the Galaxy's Chris Armas put his team up 2-0 in the 58th minute, however, a golden goal finish to the first championship game seemed unlikely.

United were not going to let the Galaxy coast to the trophy, though. "I even felt confident that when we were down 2-0 we could get a goal back," then United coach Bruce Arena said in a post-game interview.

Sure enough, they did. In the 73rd minute, United's Tony Sanneh headed home a Marco Etcheverry free kick to pull his team within one goal. A game that looked destined for a dull shutout now had new life.

If not for the thrilling finish that ensued, overall ratings would have been low and Americans looking to give soccer a chance would have been left with much to be desired. After all, on a drenched playing surface that afternoon, the "beautiful game" was far from appealing.

With just over eight minutes remaining in the match, another Etcheverry free kick landed at the feet of Shawn Medved, who followed up his initial saved shot by calmly slotting the ball between two defenders attempting to cover the goal. 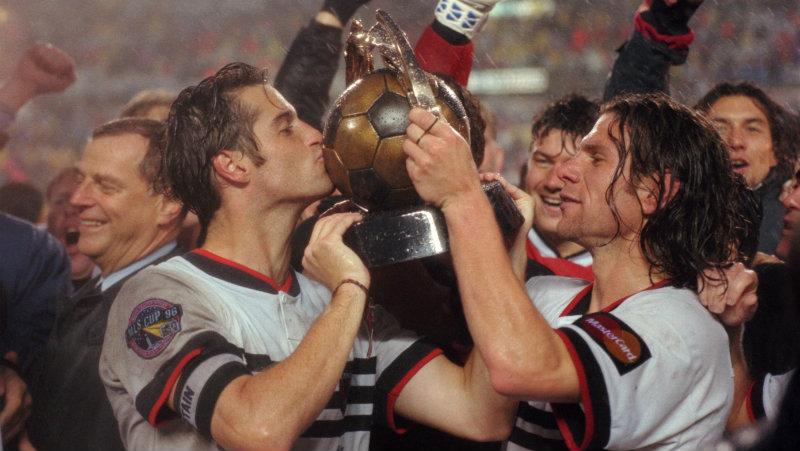 United pushed for the game-winner, but was unable to finish. The thriller continued into extra time, but after just three-and-a-half minutes, it was all over, fittingly, thanks to another Etcheverry set piece. The Cup's MVP sent a corner kick into the penalty area, where Eddie Pope headed in the game winner. And just like that, D.C. United were the first ever MLS champions.

Interestingly, both United and the Galaxy have each won four MLS Cups, four Supporters' Shields and one CONCACAF Champions League3 title. No other team has accomplished any of those feats. These two are undoubtedly the most storied franchises in the MLS; however, they are far from the only teams with proud traditions. 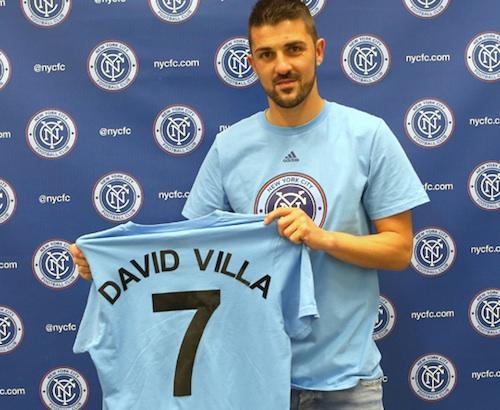 In 1996, only ten teams played in the MLS. In subsequent years, the MLS has seen the addition of 11 expansion teams4, with three new ones set to arrive by 2017. Most notable is New York City FC, which has signed aging international stars David Villa and Frank Lampard for its inaugural season in 2015. And, after the contraction of both Florida teams—the Mutiny and expansion team Miami Fusion—in 2002, David Beckham plans to bring back a Miami team as early as 2018.

The Mutiny is the only inaugural MLS franchise that is no longer in existence5. The other nine, along with 10 expansion teams, three of which are located in Canada, make up the 19-team league of 2014.

Despite the MLS's rapid growth, men's professional soccer remains only the ninth most popular sport in the U.S. (counting professional and college sports independently), according to a Harris Poll. Soccer is not likely to overtake football, basketball or baseball in the next decade, but it is nonetheless capable of holding its own.

After an unsurprising decline following the excitement of the opening season, MLS attendance has gradually increased, and in 2013, teams averaged over 18,500 spectators per game. 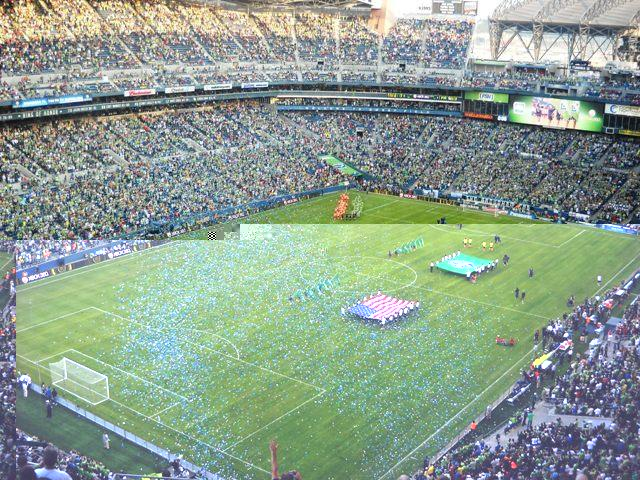 Photo: The Seattle Sounders draw by far the most fans of any team in the MLS.

Photo: The Seattle Sounders draw by far the most fans of any team in the MLS.

Two major factors have contributed to the growth of the MLS. First, the addition of big-name players—most notably David Beckham and Thierry Henry—has drawn massive crowds, especially when these stars visit away stadiums. The second and more significant contributor has been the expansion teams. Seattle, which lost an NBA basketball team due to poor attendance, averaged 44,000 fans at Sounders soccer games in 2013, more than twice as many as the Galaxy, which drew the second largest crowds. Since the success of the Sounders, the MLS has done well to identify the soccer-fan demographic. In 2011, the league expanded to Portland, where attendance numbers at Timbers games averaged the third highest last season. Right behind the Timbers was the Montreal Impact, a 2012 expansion team, which also averaged over 20,000 spectators per game.

When compared to the NFL, which averages an attendance of 67,000 per game, the MLS may appear on the brink of extinction. However, this could not be further from the truth. Major League Soccer is growing faster than any of the major sports leagues and is showing no signs of slowing down.

Footnotes
1The Supporters' shield is given to the MLS team that finishes with the best regular season record.

2In golden goal, the first team to score wins the game.

3The CONCACAF Champions League is a yearly tournament featuring teams from North America, Central America and the Caribbean.

4An expansion team is one that enters a league from scratch (ie. Does not relocate). In the MLS, expansion teams get a special draft in which they can take players from other teams in the league.

5The San Jose Earthquakes (originally named San Jose Clash) relocated to Houston in 2005, but elected to leave all records, including championships in 2001 and 2003, in San Jose. The Earthquakes resumed play in San Jose three years later.