While most of the other students in Blair's graduating class of 2008 spent their Septembers fretting about test scores and the perfect extracurricular recipe to secure admission at a top-tier four-year college, senior Sebastian Falcon kept his cool. More interesting to him than the "typical college" appeal of fraternities, quads or the nerve-wracking major-choosing process was the call of the kitchen. 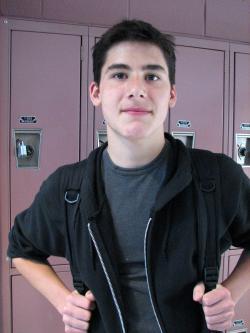 Photo: Senior Sebastian Falcon is attending the Culinary Institute of America this fall.

Photo: Senior Sebastian Falcon is attending the Culinary Institute of America this fall.

In the fall, Falcon plans to attend the Culinary Institute of America (CIA), the self-proclaimed "World's Premier Culinary College." According to the CIA website, students come from all different backgrounds to study the finer points of a cooking education at the insitute's various campuses around the country, specializing in baking, pastry-making and general culinary arts. As their senior years wind down, some Blazers have chosen to head straight into career prep vocational schools over rather than the standard four years of liberal arts.

According to the U.S. Department of Education, choosing trade school over college is a fairly popular option in the United States; many students appreciate the directness of one to two year programs over a standard four. Training and vocational programs can prepare students in a range of careers including cosmetics, automotive techniques, cooking and plumbing. Many of these schools bypass typical core classes in order to shepherd their students straight into prep-work that is useful towards a chosen career.

While Falcon's real craze for cuisine emerged only recently, he has been cooking as a hobby for many years. "I guess I have always liked cooking, but I didn't take it seriously as a career option until about junior year. I have cooked a lot with my parents, my Dad especially, and I learned a lot of what I know from them," Falcon says.

Although he respects his teachers, Falcon is careful to give himself some credit at the cutting board. "I also did a lot of research and practice on my own," he says. Falcon's favorite experiments are with desserts - cakes, mousses and baklava are among his favorite things to make.

As soon as Falcon realized that he wanted to pursue cooking seriously, he began researching higher education plans. "It took me a while to set myself [up] to go to culinary school," he says. "I wasn't sure it was logical as far as education goes. But I decided to because more and more culinary schools have classes in more than just cooking."

Blair 2007 graduate Josh Uzzell also decided to take his education into his own hands - during his senior year, overwhelmed by all the college buzz from his peers, the budding handy-man developed a keen interest in sheet metal work while studying at Thomas Edison High School's Heating, Ventilation and Cooling (HVAC) program. He pursued this interest into post-secondary education, enrolling in the Sheet Metal Union of the Maryland/Virginia/West Virginia area - also called the Sheet Metal Works International Association Local 100 - after graduation. "Basically, it's on job training coupled with some in-class hands-on instruction, where what you can learn in the classroom - like basic math, drafting, welding, soldering and architectural sheet metal design - supplement what one might be doing out on the field," Uzzell says

Cathy Henderson-Stein, Blair's assistant career information coordinator, says that throughout her years as a college counselor, the vocational school option hasn't been particularly popular at Blair despite the national statistics; according to her records, "less than 10 percent" of students typically explore the option. But for the students who do plan to head straight into the field, she gives career programs a hearty thumbs up. "Every student is different. Every student has talents," she says. "If it's what you're interested in, go for it."

In terms of securing admission at a top trade or vocational program post-graduation, Henderson-Stein notes that the process can sometimes be more direct than a typical college application. "It's usually fewer hurdles. There are usually no standardized test requirements like the ACT or the SAT, but there is often an aptitude test. If I want to be a carpenter, I have to be able to use my hands," she says.

Still, Henderson-Stein is quick to note that though the application process may be easier for vocational school students, it is often no less rigorous once students enter the job market. "We advertise a job with a plumbing company, and they look for a commitment, attention to detail," she says. "And aren't these the qualities we want in everyone?"

Eyes on the prize

Uzzell's greatest pride over the past year of his education has been his personal motivation towards his work. He has often pushed himself beyond the classroom's expectations and experimented with his own designs. "I was always sitting in front of a set of blueprints," he says. "I would scour over them and try to figure out where this duct should go, how much air it should carry and the like. I also - whenever I got the chance - was teaching myself advanced layout techniques."

Uzzell and Falcon both have long-term goals for their interests, but each also respect the value of tempering job specialty with a base in academics. Next year, Uzzell has plans to migrate away from sheet-metal and onto the college track. He will enroll as a freshman mechanical-engineering major at Frostburg State University in the fall, while Falcon intends to enroll in a healthy balance of academic classes once he reaches the CIA. Someday, he plans to use his skills in cooking combined with business aspirations to open his own restaurant or catering company.

Although Uzzell will be leaving the hands-on arena, he has no regrets about the past year he has spent in training and keeps his mind open with regard to the future. "Because of my fear of complacency and the fact that I'm still not entirely sure of my true goals, I've decided that it would probably be best to go to college and broaden my horizon," Uzzell says. He's quick to add that the experience of living on his own while training for work is one he will always consider valuable. "I've learned how to be an adult, [though] I'm only eighteen by a few months. I'm proud of that."