The SAT is designed to benefit the rich

The College Board's attempts to address testing inequity have not been enough.

On the morning of Saturday, August 24, 2019, students across the country took the College Board's Scholastic Aptitude Test (SAT), a standardized test that many American colleges and universities require or consider when reviewing applicants. Others took SAT Subject Tests, admissions exams that test students' knowledge on specific subject areas.

Although not all schools require applicants to submit standardized test scores, many do, and nearly all take scores into consideration when reviewing applicants, even if they're not required. "Only about five percent of the four-year regionally accredited colleges in the U.S. News Best Colleges universe say they don't use the SAT or ACT in admissions," U.S. News reported.

Because test scores can often play a large role in whether or not a student gets into a school, there is a lot of stress surrounding standardized tests, and pressure to do well on them.

Upper-class students automatically have an advantage when it comes to this aspect of college admissions because they can afford prep books, private tutors, and other study resources that cost money. This is unfair to lower-class students, whose chances of getting into college go down simply because they can't afford the same SAT prep materials as wealthier students.

The College Board redesigned the SAT in 2014 to make it more fair by testing more basic vocabulary and more straightforward math concepts in order to cater to students of all backgrounds. In his speech explaining the thought process behind this revamping, David Coleman, the President of the College Board, admitted that the old version tested concepts that were irrelevant to success in college and that its design allowed wealthy students to do better than less privileged students. He hoped to change that with the new SAT. 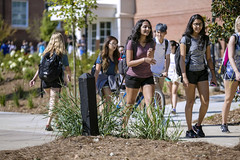 SAT for the rich

Photo: Students across the nation took the SAT and SAT Subject Tests on Aug. 24 (courtesy of Creative Commons).

Photo: Students across the nation took the SAT and SAT Subject Tests on Aug. 24 (courtesy of Creative Commons).

However, the new version is still unfair. The price listed on the College Board's website to register to take the test is $49.50. To take it with the essay, an optional portion of the exam that some colleges and universities require, costs an additional $15. The College Board's Question-and-Answer (QAS) service is $18 more. To buy the Board's official SAT prep book, it costs $29.99.

There is a fee waiver made available by the College Board for high school students that meet any of the Board's requirements, including but not limited to: enrollment in or eligibility to participate in the National School Lunch Program and enrollment in a federal, state or local program that aids students from low-income families.

The fee waiver covers the costs of the SAT with or without the essay, and the costs of three Subject Tests taken in one day. This feature of the waiver can be used twice. It also provides two free QAS or Student Answer Service reports, as well as unlimited score reports among other benefits.

This seems like a great plan that should serve to even the playing field, except for the fact that students are allowed to take the SAT an unlimited number of times, and the College Board will store the most recent six. So, in theory, a wealthy student could take it 20 times trying to improve their score. A lower-class student using the fee waiver, on the other hand, only has two tries.

If a student is using a fee waiver, it also limits their opportunities to superscore their SAT. Superscoring is the process where colleges look at the highest score that a student received on each section of the test, Math and Reading & Writing (R&W), across all tests they've taken, and combine them for the total score. For example, if a student took the SAT twice, and got a 700 on the Math section and a 600 in R&W the first time, but got a 600 in Math and a 700 in R&W the second time, their superscore would be a 1400.

Not all colleges superscore, but many do. It's a process that's especially helpful to students who only want to focus on one section of the SAT at a time, and can afford to take it a minimum of two times. But it's unfair to lower-class students who can only take it once or twice and therefore have fewer chances to improve their superscore, and their overall score without superscoring.

Being forced to take this many Subject Tests in one day can also be detrimental to students' scores. Each Subject Test is one-hour long, and according to the Journal of Neuroscience, it is difficult for teenagers to concentrate on a task because their brains aren't fully-developed.

Fortunately, according to the 2018 State of College Admission Report from the National Association for College Admission Counseling (NACAC), only 6.6 percent of colleges find SAT Subject Test scores of "considerable importance" when reviewing applications. However, these scores are still required at nearly all elite schools, such as the Ivy's. Not to mention that the fee waiver doesn't cover everything, including the costs of changing test-taking dates or locations.

The SAT is inherently biased towards wealthy students that have the resources to better prepare for the test, take it as many times as needed and spread out their test dates as much as they want. The College Board has attempted to address this inequity, but more work still needs to be done.

Post-secondary education can change the course of a person's life. It isn't right that someone shouldn't be able to pursue this education simply because they didn't have enough money to get a good score on a standardized test.

In fact, the SAT was designed to benefit the poor; not the rich. The goal was to mitigate advantages upper income children had with respect to good schools ( both public and private) and family connections / influence made possible by wealth. In other words it gives children without the aforementioned benefits an opportunity to show their colors, their smarts. That one can’t get a study book or take the test 20 times, well... two times is usually sufficient. One can also check out such books at the library. Not all in life can be made fair.