The skinny on MTV's "Skins"

Hastily mashed-up promos featuring hard partying began appearing on MTV in late fall last year. This time, it features teenagers in Baltimore instead of guidos in Jersey Shore. This time, it causes even more controversy. While companies are scrambling to nix commercials, the Parents Television Council is clawing their way into the issue. This proves what loyal fans of the original "Skins" have been saying all along. This show is a gem in British pop culture and cannot be diluted to conform to American standards. 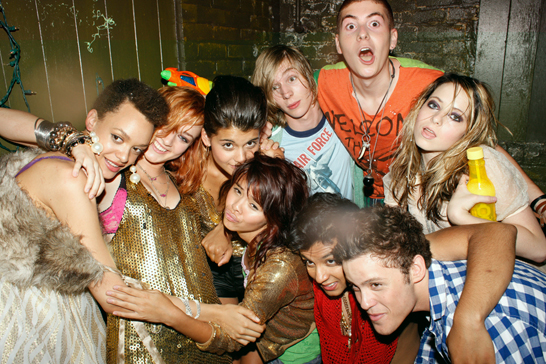 Photo: The American "Skins" characters are exactly the same as their British counterparts, but less witty.

Photo: The American "Skins" characters are exactly the same as their British counterparts, but less witty.

"Skins" premiered on MTV's racy cousin, the British E4, in 2007. The show became wildly popular in England and even picked up a few prestigious British Academy of Film and Television Arts awards. "Skins" picked up modest success in the States as an underground cult favorite. It gave us American teenagers a raw slice of European life. Though some scenes are exaggerated, "Skins" is brutally honest in its portrayal of rebellious teenagers trying to find their place in the world. It is unapologetically raunchy and best of all uncensored.

Everything fell apart when co-creator Bryan Elsley announced an American version of the hit show. Fans began Facebook groups protesting the revamp of the original series. Petitions went around promising to boycott the show. MTV responded with a campaign of mysterious promos to generate buzz.

For all their effort, MTV simply could not capture the same realness from the original. The characters were not believable and were mindless clones of the original version, except with worse dialogue. The characters self-consciously try to emulate their British counterparts. They are almost afraid of being unique and instead retreat behind bland "The Hills" characters. In effect, they miss the point of the show. "Skins" is supposed to be about teenagers being individuals. "Skins" is a world where Holden Caulfield's reign supreme and adults are Charlie Browns.

The MTV version failed simply because, Britain is different from America. Save a few choice shows, mostly on HBO, American television doesn't meet Britain's bar for witty writing. The British "Skins" has one-line zingers that I remember for days. Likewise, the British version of "The Office" had quicker dialogue than the American version." In addition, Britain is simply more comfortable with portraying real life with actors who look like regular people. This is why "Gossip Girl" and "Glee" are so successful in America; these shows present fantasy worlds.

These differences are fine, but one culture cannot be forced onto another one. Each country should stick to producing its own kind entertainment.