The (slightly old) kids are alright

Daltrey and Townshend reach out to all generations

Even the most dedicated fan of British rock band The Who might be slightly hesitant upon hearing about their 2006-2007 tour 30 years after the band's prime; after all two members are dead and the remaining two are three times as old as they were when "My Generation" became famous. But, remaining members Roger Daltrey and Pete Townshend's recent performance at the Verizon Center proves that The Who isn't popular exclusively with the baby-boomer generation, but rather with every generation since.

In 2006 The Who released "Endless Wire, which was received neither particularly poorly nor particularly well. At the March 8 concert, the band played various songs from their new CD, but mainly stuck with the familiar and more popular, songs from their earlier years. Though drummer Keith Moon and bass guitarist John Entwistle are dead, the performance maintains the style and the feel of The Who when all of the original members were alive. 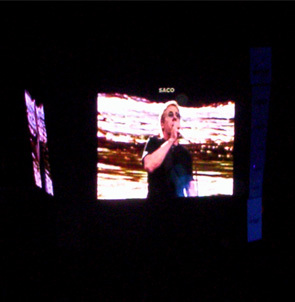 Photo: Lead vocalist of The Who, Roger Daltrey, performs at the Verizon Center.

Photo: Lead vocalist of The Who, Roger Daltrey, performs at the Verizon Center.

This hippie-era stylistic imitation was achieved partially because of Zak Starkey, the drummer for both the 2006-2007 tour and "Endless Wire." While Starkey, who was taught by Moon, is a brilliant drummer, he has still not maintained the popularity of his father Richard Starkey, more commonly known as Ringo Starr of The Beatles. Despite living and playing in the shadow of his legendary father, the younger Starkey does a supreme job, showing of his flashy drumming throughout the concert.

Opening for The Who was the American power-rock band "Rose Hill Drive" whose three members performed a few of their songs, memorable mainly for the steady bass which produced a rhythm that the many fans could feel vibrating their bones. While their music was intense, the songs seemed to have only one style, which unfortunately consisted of indistinguishable lyrics and enough head-banging to produce brain damage. Although the Rose Hill Drive's set displayed remarkable skill, fans weren't paying to see the opening act; they were paying for Daltrey and Townshend who were undeniably better, and more anticipated, than Rose Hill Drive.

The Who and their lineup, which consisted of Starkey, Pino Palladino, Simon Townshend and Brian Kehew, entered the arena greeted by cheers and screams. They instantly jumped into their first hit "I Can't Explain," which sounded just as good as it did when it was recorded in 1965, with even sharper quality.

One of the concert's most interesting physical aspects was a giant screen positioned behind the musicians on which images and video clips relating to the songs were projected. Images of eyes were projected during the widely popular song "Behind Blue Eyes," while for "Real Good Looking Boy" photos of Elvis, Daltrey's hero, were cycled through on a loop, constantly changing in accordance with the music. 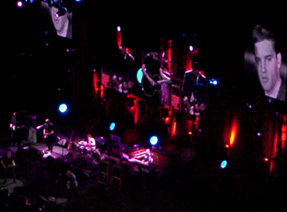 Photo: Behind The Who during "Real Good Looking Boy" images of Elvis were projected on a giant screen that was constantly incorporated into the performance.

Photo: Behind The Who during "Real Good Looking Boy" images of Elvis were projected on a giant screen that was constantly incorporated into the performance.

The Who, which provides theme music for the "CSI" franchise, played all three of the incredibly popular theme songs, "Who Are You," "Won't Get Fooled Again" and "Baba O'Riley," during the performance. True fans will also know that Daltrey even appeared on a recent 2006 episode of "CSI" playing a mob boss who is also a master of disguise. Towards the end of the show he is shown photographs of various versions of himself in disguise and points out that one of the versions of himself is "a real good lookin' boy."

Excited fans were clearly ecstatic to be in the presence of rock legends Daltrey and Townshend. During the fan-favorite song, "Baba O'Riley," the epitome of The Who's musical genius, the entire audience imitated the pianist and drummer's hand motions during the highly recognizable intro. At other points the audience "windmilled" their arms in unison with Townshend who, at the age of 61, still continues to be as vibrant and enthusiastic as he was when the band performed at Woodstock in 1969.

Easily the most memorable set that the band performed was the collection of songs from their album "Tommy," released in 1969, which features most-famously "Pinball Wizard" and "See Me, Feel Me." Even though the songs from the rock-opera about a deaf-dumb and blind boy, Tommy, were not played, the massive congregation of fans were still pumped by the music and sung loudly throughout the show. By the end of the "Tommy" set the entire arena, which houses up to 20,000, smelled like Iwo Jima, the "sulfur island," from the hundreds of lighters held in the air, swaying to the music.

Regrettably, time has taken its toll on the remaining members. While the performance was still filled with excitement, it lacked some of its former energy, the most of which was provided by former drummer Keith Moon. While alive Moon was famous for his destructive and wildly ridiculous behaviors that earned him the nickname "Moon the Loon." During one performance Moon filled his drums with water and goldfish and proceeded to play on them, eventually commenting when asked what he did with the goldfish that even drummers get hungry.

Even without Moon's energy, they remain incredible. Daltrey is still a brilliant singer and manages to hit the high notes in the chillingly high-pitched "See Me, Feel Me" and Townshend's guitar skills remain unmatchable. Daltrey and Townshend have successfully proved that there is no such thing as being past their prime. Hopefully they will continue this feat for years to come; for it has truly been an amazing journey and these kids are definitely still alright.