Remember MySpace? A few years ago, the website died out among most teenagers and even adults after numerous tries to update the website to make it equivalent to its biggest competitor: Facebook. As time has gone, Facebook has become the social networking favorite – an easy way to stay in touch with friends across the country and to reunite with old colleagues. But with the development of other networking sites such as Twitter and Tumblr, will Facebook be the next website to fizzle out? 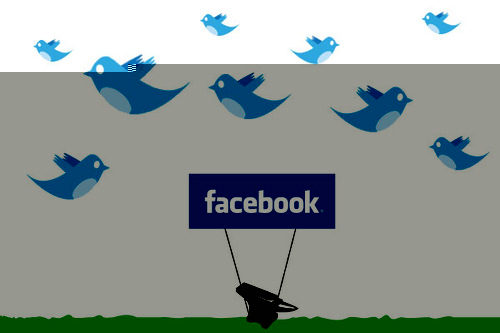 Photo: As Twitter's numbers continue to rise, it is just a matter of time before Facebook begins to lose value in the eyes of many.

Photo: As Twitter's numbers continue to rise, it is just a matter of time before Facebook begins to lose value in the eyes of many.

The two most popular social networking sites are Facebook and Twitter, according to Discovery News. Facebook continually upgrades - CEO Mark Zuckerberg and his staff constantly add new features and elements to the site - in order to keep up with the aspects that make other sites like Twitter stand out. Those annoying Facebook changes that confuse you and make your newsfeed ridiculously complicated? Yeah, those upgrades are just ways for Facebook to compete with other social networking sites.

But Twitter's definitely got some leverage on Facebook. For one, you can communicate with not only your friends, but celebrities, athletes and anyone else you please. Twitter allows you to send 140 characters of pure thought – whatever comes to mind, the song playing from your iPod and those little streams of consciousness that you don't necessarily want to share with your 600 Facebook friends. You can get little news alerts from CNN about what's going on around the world without having to sift through online newspapers that seem to be clogging up your desktop with more advertisements than breaking news.

Facebook has tried to keep with Twitter's success – you can now tag your friends in not only wall posts but the comments as well. But for those of us who've been tweeting for a while, it's evident that those little touches don't belong on Facebook. Those Facebook users who said "I'll never get on Twitter" or "Twitter seems so stupid" now are the very people shocked at the addictive qualities of the website. There are numerous applications for Twitter on mobile devices – Twitter for iPhone/Blackberry, UberSocial, Echofon- making it easier for people to use Twitter when they don't have access to a computer. Hashtags have invaded the lives of many, including Blazers. Don't know what a hashtag is? It's the symbol for trending topics on Twitter, but the usage of hashtags has grown into the Facebook universe, appearing in statuses and wall posts everywhere.

As Twitter's popularity increases, one question arises in the mind of many: will Twitter overtake Facebook as the number one social networking site? Whether it does or not, Twitter's innovative ways have become part of the reason the website has reached so much success. It'll be hard for Facebook to keep up with Twitter as time goes on, but only time will tell which website will win this showdown.