The spirit of "Bobby" lives on

"He saw wrong and tried to right it. He saw suffering and tried to heal it. He saw war and tried to stop it," so goes the tagline to "Bobby," a film that chronicles the lives of numerous witnesses to Robert F. Kennedy's assassination at the Ambassador Hotel in Los Angeles, California.

Written and directed by Emilio Estevez, "Bobby" is an ambitious film that requires the audience's full attention with its structure similar to 2004's "Crash." While the plot of the movie is decent, the storyline jerks the viewer around with shifting scenes. Frustratingly, the film's biggest payoff is in the final ten minutes. 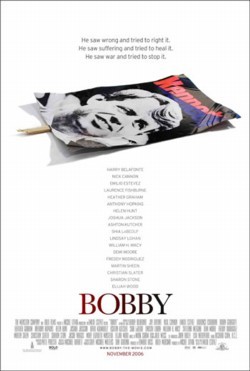 "Bobby" does not trace the life and times of Robert F. Kennedy himself; Kennedy only appears in stock footage. Instead, the film attempts to capture the essence of Kennedy's political message as he ran for the Democratic presidential nomination in 1968. Kennedy's inspiring speeches, which denounced violence, racism and discrimination, resound periodically throughout the film. It is easy to understand why so many people believed in the good that Kennedy would and could do for the United States and how those hopes were shattered after his cold-blooded assassination. In this sense, the film succeeded in conveying an overarching message.

The film focuses on an array of characters from different backgrounds and sensibilities who are represented by an impressive cast. The film enlisted a number of old award winners like Anthony Hopkins, Demi Moore, Laurence Fishburne, Helen Hunt, Sharon Stone and William H. Macy. The acting veterans were accompanied by several younger performers such as Nick Cannon, Lindsay Lohan, Ashton Kutcher, Shia Lebeouf and Elijah Wood. All the characters were unique and often conflicting but tied together in their high hopes for Robert F. Kennedy's potential as a presidential candidate. Kennedy looms over the events in the film as a saintly, almost messianic, figure.

Despite the talent of the older actors, it is the younger ones that steal the show. Particularly notable was Cannon whose intense representation of Dwayne, a Kennedy campaigner with a passion for black suffrage, which was especially powerful. Freddy Rodriguez and Jason Vargas as the Hispanic cooks, Jose and Miguel, were the most engaging duo in the film.

The film bounces through a swath of intimate stories that were generally conveyed well but they could have been stronger if the performances were more consistent. While it was entertaining to watch Rodriguez and Vargas, the scenes with Lohan and Wood, an uncertain couple, were trite and uninteresting. Despite strong if inconsistent performances and interesting if underdeveloped subplots, why Estevez chose to focus on the characters and stories in the film isn't made clear until the very end. As a result, the viewer leaves the theater satisfied but slightly baffled during the early portion of the film.

At a time when people are growing steadily more disillusioned with their political representatives, "Bobby" is a reminder of what it was like to have an inspiring representative that people could look up to. Robert F. Kennedy's message, promoting love and compassion, is as relevant today as it was in 1968.

"Bobby is 120 minutes and rated R for language, drug content and a scene of violence.