The struggle continues for boys' basketball

Senior Deontay Twyman led Sherwood's football team to two straight 4A title games and amassed 7,093 passing yards and 80 touchdowns in three years as the team's starting quarterback. He is one of the state's top football prospects and has been offered a full scholarship from a Division I football team. And, apparently, Twyman can play basketball, too. He led the Warriors with 19 points in Sherwood's 65-52 victory over the boys' varsity basketball team last night, the Blazers' third straight loss.

The Blazers (2-7) stayed close through the first three quarters of the game but unraveled in the fourth. Head coach Mark DeStefano said the biggest factor in the loss was his team's "lack of defense and rebounding in the fourth quarter." As in nearly every game this season, Blair got off to a hot start, playing great on both ends of the court. But a close game slipped out of reach when the Blazers allowed Tyman and friends to weave through traffic for easy buckets. "We got away from the things we were doing, the things that were working," said DeStefano. "Defense and rebounding was working, and we got away from that." 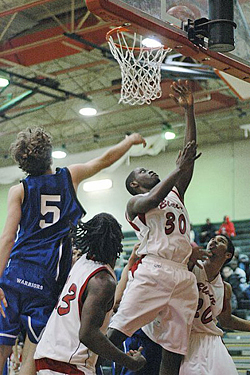 Photo: Blair center Sam Francois fights through traffic to score his only basket of the night off an offensive rebound. Francois gave the Blazers energy in a reserve role, but was whistled for a costly foul in the fourth quarter.

Photo: Blair center Sam Francois fights through traffic to score his only basket of the night off an offensive rebound. Francois gave the Blazers energy in a reserve role, but was whistled for a costly foul in the fourth quarter.

Senior Ross Williams, Blair's own version of a star quarterback, played one of the best games of his career last night, posting 25 points, scoring nearly at will. But the Blazers struggled to find scoring from elsewhere. Senior point guard Darius Smith finished with eight points, but was sidelined much of the game with foul trouble. The Blazers were also without key reserve Matt McClain, who did not dress for the game due to a two-game suspension for violating team rules. But DeStefano insisted the absence of key players had little to do with the outcome of the game. "The guys who played didn't play well enough for us to win. Those guys have got to be ready when they get their opportunity," he said.

The game was epitomized on the first play, as Sherwood's Joseph Holston took the opening tip-off and drained a wide-open jumpshot. But after the Warriors went up 5-0, Blair made a furious comeback, scoring eight straight points, including six free throws and seven points by Williams. After Twyman hit a rise-and-fire three-pointer to tie the game at 8, the teams traded baskets until a defensive breakdown by Blair led to a baseline jumper by Sherwood's Juwan Young as the buzzer sounded, giving the Warriors an 18-17 at the end of the first quarter. Williams put on a show in the first, finishing with 14 points in the period and connecting on all of his seven free throws.

After a steal by senior forward Tori Patton, junior guard Joe Dubuche gave the Blazers the lead back with a baseline jumper in the opening seconds of the second quarter. But with Smith on the bench with two fouls and Blair trying to steal minutes with backups, Sherwood went on an 8-0 run, highlighted by a wing fadeaway by Twyman with Williams right in his grill. The Blazers were held scoreless for more than five minutes, a drought that did not end until junior guard Milton Colquehon found junior big man Issy Melton open under the hoop for a layup that narrowed Sherwood's lead to 27-21. But the Blazers never got anything going in the quarter, scoring just six points. At halftime, Sherwood's lead had swelled to nine, as they led 32-23.

The Blazers came out firing on all cylinders in the second half, going on a 9-2 run highlighted by a strong display of offensive rebounding by Melton and Patton. With Blair trailing by just two, Colquehon slapped the ball away from Twyman and sent a pass ahead to Smith, who put up a twisting layup. The ball bounced off the rim, but Williams was there to grab the rebound. And although his putback was no good, he grabbed his own rebound and powered up again for a layup that tied the game at 38 with just over a minute to go in the third quarter. Blair was demoralized, though, when after a Twyman free throw and a Blair turnover, Sherwood's C.J. Goode hit a turnaround jumper at the buzzer to give the Warriors a 41-38 lead heading into the fourth quarter. 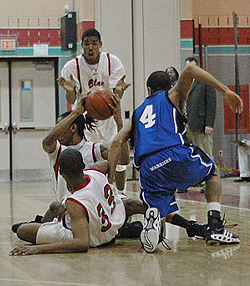 Photo: Tori Patton comes away with a loose ball for the Blazers. Blair's aggressive defense led to several Sherwood turnovers, but the Warriors came out on top, 65-52.

Photo: Tori Patton comes away with a loose ball for the Blazers. Blair's aggressive defense led to several Sherwood turnovers, but the Warriors came out on top, 65-52.

Once again, Blair looked good at the outset of the fourth, as Smith found Williams spotting up on the wing and he knocked down a three to tie the game at 41. In what again quickly became a turnover-filled affair, Sherwood stayed on top by feeding Twyman. With 3:25 to play, he drove to the hoop, hit a floater in the lane and was awarded a free throw as Sam Francois, Blair's backup center, was called for a questionable blocking foul on the play. Twyman's 3-point play put the Warriors up 49-45 and knocked the wind out of the Blazers. Had the collision been called a charge, Blair would have had the ball with the opportunity to take the lead.

Sherwood proceeded to go on a 16-5 run in the next three minutes to seal the Blazers' third straight loss and seventh of the season. Williams tapped in a Blair miss at the buzzer, but in what may be indicative of the Blazers' season as a whole, it was a case of too little, too late. And although the final score of 65-52 may have signified a blowout, it could not describe how close Blair came to taking control, and possibly winning.

DeStefano blamed the Blazers' inability to stay close or hold a lead during the game on his team's unwillingness to step up and make plays. "We kept waiting for something to happen, when we should have made something happen," he said.

Although he was upset with the way his team played as a whole, DeStefano was pleased with the way Colquehon and Francois played coming off the bench. "That's what we need, for guys to come in for four or five minutes and just give it up."

Williams and Twyman, the teams' two-sport stars, battled all night long, leading each of their teams in scoring. Holston finished with 17 for the Warriors, while Goode added 9. Smith, Williams' biggest source of scoring support all game, fouled out late in the fourth quarter, and Melton, Dubuche and Patton chipped in 6, 5 and 4 respectively for Blair.

The Blair boys' varsity basketball team plays its next home game on Jan. 12 against Walter Johnson at 7 p.m.