I had to agree with him. There's never been an American undertaking even remotely similar to the Gaza pullout, and I laugh when I hear Americans talking about the debate over the withdrawal purely in terms of security or concepts similarly easy for the American mind to grasp. Security is only one dimension of the pullout, and a small one at that. At stake are larger ideas — everything from the continuity of the Zionist dream to the debate over the viability of a "Greater Israel" to the Jewish State's defense of Jewish values. A popular anti-pullout slogan translates in English to "a Jew does not expel a Jew." It reveals much about the controversy, I think. To a lot of opponents, and indeed supporters, the disengagement's most tragic reality is that it entails Jewish soldiers removing Jewish Israeli citizens from land that has been Jewish for almost 40 years. Even the most ardent pullout supporters strongly empathize with the settlers — as left winger David Grossman wrote in Monday's issue of Haaretz, "We should all take a deep breath right now and remind ourselves that, in the final analysis, the days to come are days of mourning for all Israelis…mourning for the situation in which we are trapped, Jew against Jew with a foreign, naked hostility that stands in complete, existential contradiction to our own interests." 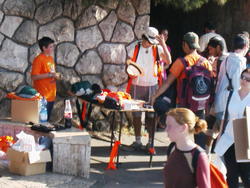 Photo: An anti-pullout protester on the streets of Jerusalem.

Photo: An anti-pullout protester on the streets of Jerusalem.

The only American event I can remember that's provided as much of a flashpoint for our pent-up national angst is the Terri Schiavo controversy. But we didn't have 50,000 American soldiers and 10,000 soon-to-be-evicted American citizens involved in the Schiavo debate. It was a passing curiosity. The Gaza pullout, in contrast, has lingered in the Israeli consciousness for almost two years. It was, during my six weeks in Israel, pretty much the only news story of any importance. It pervaded everything, and everything somehow revolved around it. The debate was omnipresent, and the nation was saturated in anti-pullout orange and pro-pullout blue. Orange and blue ribbons dangled from everything from car antennas to backpack handles to belt buckles, and there were streets where I saw literally hundreds of orange ribbons hanging from storefronts and windows and balconies. Even today you can't wear orange or blue in Israel without making some kind of statement. Even the colors there have become politically charged.

I'm fond of telling Americans that the pullout controversy is a lot like the Iraq debate — only ten times worse. There was never any possibility of civil violence in the United States with the Iraq invasion. In Israel it's seriously discussed. I didn't hear any strong pro-pullout opinions when I was there — not from Israelis, not in the press, not anywhere — maybe because this is simply way too passionate and complicated an issue to simplify with a mere "pro" or "con." But I heard a lot of worry, and a lot of fear. "I don't know what's going to happen this August — I'm just worried" was a common refrain.

And there are so many levels on which to be worried. There's the worry that Jewish settlers will attempt to violently resist the evacuation orders, and that such resistance will cause rifts and divisions within Israel that will never heal, namely divisions between religious Jews who believe that Israel exists to defend Jews unequivocally, and secular Jews who believe that more abstract ideals should bow to political realities. And then there's the worry that the Gaza strip and the surrounding Philadelphi corridor will turn into an arms bazaar post-pullout, and that the absence of a powerful military or political presence other than Hamas in the Gaza Strip will turn it into a latter-day pre-9/11 Afghanistan.

And with that comes a host of other worries — worries that Israel will allow Egyptian soldiers to reenter the now de-militarized Sinai peninsula in order to prevent weapons smuggling into the Gaza strip; worries about water rights and travel between Gaza and the West Bank for ethnic Palestinians; worries about Kassam rocket attacks on the nearby Israeli cities of Ashdod and Ashqalon (it was an oft-repeated fact that the Israeli government has subsidized the construction of new bomb shelters in each city); worries even about rocket attacks on planes flying in and out of Ben Gurion International Airport.

That ideology was formed by a combination of nationalist and religious zeal. As Israel reeled after the Egyptian and Syrian surprise attack in 1973, the settlements flourished, reenergizing the nation after the most costly military engagement in its history. In the 1970's and 80's the settlers represented a new generation of Israeli pioneers, motivated by the patriotic obligation to rebuild the country after its darkest moment, and the religious obligation to settle ancestral land, specifically Jewish biblical cities within Palestinian holdings, such as Hevron. The conjoining of these two motivations led to the creation of a distinctly religious brand of Zionism, an idealistic right-wing movement dedicated to the upkeep of a Jewish Israel through the possession of ancestrally Jewish land. It was a passionate, organized and influential movement wholly separated from the moderate and secular realities of Israeli society, and wholly separated from reality in general — as many have noted in the Israeli press over the past few months, it was unreasonable to believe that 10,000 Jews could permanently remain in Gaza while surrounded by 1.5 million Palestinians, and unfortunate that so many lives and dreams had to be disrupted before this was finally realized.

Saving it from itself?

Indeed, the Gaza pullout isn't so much a debate over land or security as it is a debate over the nation's soul. A good chunk of the country sees disengagement as the only way in which to protect the Jewish state from the demographics crisis that could eventually spell the death of the Zionist movement. There are 10,000 Jews in the Gaza Strip, compared to 1.5 million Palestinian Arabs, and this past week Haaretz reported that there are, for the first time in decades, more Arabs than Jews in Greater Israel (all lands held or annexed by Israel, including the Palestinian territories). Israel faces long-term problems if it maintains any kind of presence in majority-Arab areas — in the starkest terms, the Gush Katif settlement collective in the Gaza Strip and a Jewish Israel simply can't coexist. And then a good chunk of the country is more concerned with sustaining an Israeli Israel than it is with a Jewish one, and to a growing majority, a "Jewish" Israel simply isn't as important as a progressive or modern or democratic one.

And then a good chunk of the country believes that if Israel no longer exists to protect Jews, it is on its way to no longer existing at all. Ten thousand settlers are wondering where they will be living in another week. That the government has had to purchase another several hundred hotel rooms in Jerusalem for settler relocation is further indication that the government has scant idea as to what to do once the settlers are evacuated. That's no way to treat anybody, opponents argue. And it's no way to treat Jewish citizens of Israel, particularly ones credited with rescuing the nation only two decades earlier.

The debate goes on. Israel, luckily, has a history of getting through its rough spots. In the last ten years alone it's survived the assassination of a beloved Prime Minister, the deterioration of the peace process, an economic depression, five years of terrorism, financial divestment and a dive in immigration; and during its relatively short history it's made it through invasions, economic boycotts, the hostilities of its neighbors and the unfair and undeserved hostilities of Western Europe and the United Nations. The question now: Can it survive itself?