The supplement sweeping the nation

Blazers use Creatine Monohydrate to get ahead of the competition

The bench-press bar pulses up and down as the beat of Missy Elliot's "Lose Control" blares throughout Junior Eli Simon-Mishel's cramped basement. As the bar bounces, his breath becomes short and sharp. His face contorts into a look of anguish, his puffed up cheeks showing the intense stress on his body. "Twenty!" he exults as he clangs the bar back into place above his now still frame. Simon-Mishel reaches to his side and, with shaking hands, ladles two scoops of powder from a giant gray tub, stirs them into a cup of water and then downs the pink mixture in one swig.

This mysterious pink mixture is known as Creatine Monohydrate. Commonly called Creatine, this substance is a legal performance enhancing supplement that is gaining in popularity nationwide among athletes. In a 2002 survey of high school coaches conducted by General Nutrition Center (GNC) and reported in a Washington Post article, 92 percent of the high school coaches polled believed athletes are using supplements to enhance their performance now more than ever; 87 percent thought the supplements were safe and 43 percent recommended Creatine and other supplements to their athletes. 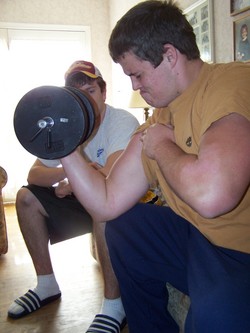 Photo: Senior Ian Procter lifts and curls weights outside of school to bulk up. His use of Creatine aids him in strengthening his muscles.

Photo: Senior Ian Procter lifts and curls weights outside of school to bulk up. His use of Creatine aids him in strengthening his muscles.


Unlike anabolic steroids, which mimic the male hormone testosterone to increase strength, Creatine is an amino acid that the body naturally produces in muscle tissue that enhances strength and physique. Creatine works on a molecular level by replenishing adenosine tri-phosphate (ATP), the chemical that is used for quick energy bursts in athletic activities like weight lifting or sprinting. It can be obtained through consumption of meat and fish but in a form less potent than the purchasable formula.

Blair physical education teacher Robert McMahon, Jr., has a degree in exercise science; is a member of the National Strength and Conditioning Association (NCSA); attended the American College of Sports Medicine and is a certified personal trainer as well as a strength and conditioning specialist. McMahon is knowledgeable on the topic of performance enhancing supplements and even took Creatine during his twenties.

Because Creatine is found naturally inside the body, McMahon feels it is unnecessary for athletes under the age of 18 who are still growing to take Creatine in supplement form to get stronger. "When you are a young athlete you are able to make significant gains without taking Creatine as a supplement. Young people underestimate the value of proper nutrition. If you have proper nutrition and eat enough meat, you are going to have enough Creatine reserves in your body to get stronger," he says.

Users and side effects

Studies have shown that Creatine has almost no negative side effects. McMahon points out that of the symptoms that do occasionally arise, nausea and diarrhea are the most common. He also says that people with previous kidney problems should not take Creatine because it can increase the chance for kidney stones.

In a study conducted by the International Journal of Sports Medicine, a group of 175 subjects received either 10 grams of Creatine or placebo daily for an average period of 310 days. Diarrhea and nausea caused three subjects to stop using Creatine, but there were no other significant differences in the side effects reported by each group.

A Truman University study concluded that Creatine use could be linked to mild cramps because of the depletion of water from muscles, but that there were no serious long-term consequences of using Creatine.

Simon-Mishel says the studies he found online while he was searching for the Creatine's side effects erased his fears about the risks associated with using the supplement.

In a 2004 article, the Washington Post reported that a 2003 study conducted by the Blue Cross Blue Shield Association found that as many as 1.1 million youths ages 12 to 17 have taken sports supplements, a 10 percent increase from a similar study done two years before.

Simon-Mishel is one of those new Creatine users. He uses it to bulk up and add some power to his hitting so he can improve his chances of making the Blair varsity baseball team.

Junior football player Ritchie Willet had a specific goal to meet when he chose to take Creatine: starting for the Blair football team. "I wanted to be a starter at tight end [for Blair] but I wasn't quite big enough," he says. "By using Creatine I hoped that it would give me more power, speed and of course more strength."

Whatever their objectives, Blazers using Creatine experienced significant results. Senior Ben Dean explains that in the first few weeks of using Creatine, known as the "loading period," his body "jumpstarted" and he gained five pounds of muscle. Dean says that in one workout session last year, just two weeks after he started taking Creatine, he noticed that his strength and endurance had increased. "We were doing our normal workout but it felt like I just had more energy than everyone else; everyone just burned out before me," he says. " I could do four sets when they could only do three."

Simon-Mishel says he saw results immediately after he first started using Creatine. His friends noticed that he was filling out shirts and he realized he was hitting further than before. "Creatine gives me a more confident air because of my body. I just feel powerful," he says. "The bat feels lighter and I feel like I have more control in the batter's box."

Willet also perceived a distinct improvement in his endurance. He recalls one incident in particular that epitomized the strength and stamina benefits Creatine was giving him. As part of a grueling preseason workout, the football team ran around the practice field carrying weights to gain upper-body strength and improve conditioning. During one workout, Willet was surprised to notice that he was crushing the competition. "I was the only one with a 45-pound weight and while most people jogged or walked one lap, I sprinted an entire two laps," he says. Willet attributes this success to his Creatine use.

Unlike anabolic steroids, Creatine can be taken only orally and has not been banned by any major sports league. Simon-Mishel believes that Creatine gets such a "bad rap" because it is often confused with banned anabolic steroids.

Willet agrees and elaborates, "Many [critics] of Creatine think it's like the same stuff professionals use, but Creatine is nowhere near as extreme a performance enhancer. It's much safer." The artificial testosterone that steroids contain depletes muscle tissues and weakens muscles in the long term, causing injuries. Creatine is a more gradual way to add bulk.

McMahon, who spends most afternoons supervising Blair students and lifting weights himself in the Blair weight room, says that he would easily be able to tell the difference between a student using Creatine and a student using steroids. "Creatine is not as strong as an anabolic steroid. If someone started using steroids and started benching 40 more pounds I would notice, but with Creatine it might just help with that one extra rep or final push. It's much more subtle," he says. "Creatine is a supplement, not illegal, and not nearly as dangerous as steroids."

Senior football player Ian Procter introduced both Willet and Dean to Creatine. Dean felt uneasy when he first seriously considered using Creatine. "For a while I thought it was risky and possibly harmful, but then I saw the effects it had on Ian," he says.

Dean and Simon-Mishel were surprised at how many places sell Creatine. Creatine can be found at most drug stores, including GNC, and can also be ordered from many Internet sites. The main obstacle these Blazers faced when trying to obtain Creatine was the cost. Willet said a month's worth of powder could cost between $60 and $80. Though Creatine may be pricey, Blazers are willing to shell out extra cash to gain a slight edge over their competition.

Though Creatine has not been banned at the high school level, according to the same studies, it still provides a decisive advantage to users over their "clean" opponents. This raises an ethical question: with the major advantage the substance can provide, is using Creatine cheating? Both Dean and Simon-Mishel cite its legality as proof enough that it is not cheating. Dean says that the boost Creatine gives him over his opponents is not that significant and that "if they don't want to use it that's their choice."

Willet is less assertive in his denial that Creatine usage is cheating. Though he agrees with the others that it is not "technically cheating" he admits it does provide a "little boost" that other athletes may not be able to afford or choose not to use.

As his workout music fades, Simon-Mishel ends his workout with the same comment he started with. "Gotta get big, gotta get big," he says as he flexes his defined biceps and chugs more pink Creatine. Simon-Mishel neatly sums up the conventional wisdom regarding Creatine. "So many people are using supplements to get ahead nowadays, if you don't take a performance-enhancer it's almost like everyone is improving while you are standing still. No one is doing anything illegal by taking Creatine. It's essentially a healthy and better-tasting protein drink that adds bulk if you work out," he says.