What course will the Democratic government take? 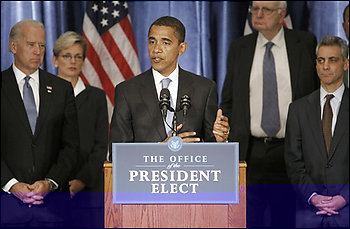 "Change" has been the Obama campaign's buzzword, and now citizens are wondering how this change will take form. On his immediate agenda is the nation's troubled economy, which recently posted the highest unemployment numbers in 25 years. Obama has formed a Transition Economic Advisory Board to handle changes in economic policy. Members include former Chairman of the Federal Reserve Paul Volcker, former Treasury Secretary Lawrence Summers and a number of corporate executives including billionaire philanthropist Warren Buffett.

Obama has also endorsed a general Democratic proposal to divert portions of the $700 billion bailout towards the struggling automobile industry. His choice for White House Chief of Staff, Representative Rahm Emanuel (D-Ill.), also mentioned that middle class tax cuts are a central part of the administration's economic policy.

The President-elect seems less concerned about stepping on toes when it comes to the current administration's controversial policies regarding issues such as biological ethics, the Middle East and the environment. Obama has announced that he plans to reverse numerous executive orders issued by President George W. Bush on this diverse array of policies. Given the sweeping nature of Bush's applications of executive authority, reversals of key executive orders could prompt drastic changes in domestic policy. For example, repealing the executive order that limits federal money for certain types of stem cell research would greatly expand available funding possibly resulting in a number of significant medical breakthroughs. Signs also indicate that Obama seeks to close the detention center at Guantanamo Bay in Cuba as soon as possible.  "I have said repeatedly that I intend to close Guantanamo, and I will follow through on that," Obama said in a Nov. 16 interview with CBS's "60 Minutes."

Now that the fledgling political star has won the election, political analysts are busy predicting potential nominees for central positions in Obama's cabinet. A shortlist of candidates, leaked to the Associated Press by anonymous Democratic officials, embodies two main tenets: experience and bipartisanship.

A majority of the names revealed are highly experienced officials with résumés that include prior presidential administrations. Volcker and Summers, for example, are both contenders for Treasury Secretary. Household names such as Senator John Kerry (D-Mass.), the Democratic presidential nominee in 2004, and Senator Hillary Clinton (D-N.Y.), Obama's main challenger during this year's primary season, may also be proposed as candidates for Secretary of State.

As for bipartisanship, the lists are dotted with moderate Republicans in the running for a number of important positions. Current Secretary of Defense Robert Gates may be asked to retain his position in the upcoming administration, as Obama plans resolutions to the conflicts in Iraq and Afghanistan. Congressman Chuck Hagel (R-Neb.), a critic of the war in Iraq, is also a potential candidate for both Secretary of Defense and Secretary of State.

Whatever decisions Obama and his aides eventually reach, it is probable that we will learn of them soon. Seeking to smooth over the transfer of power, Obama has already assembled a transition team and is expected to reach decisions in the coming weeks.

Democrats gained enough seats to secure control of the House of Representatives and a solid majority in the Senate mainly due to a troubled economy. Maintaining firm control of popular opinion, as well as large leads over Republicans in the 2010 election, hinges upon perceived progress on this issue. An additional $100 billion stimulus package is already in the works and is projected to include funding for job-creating public works projects and extensions in unemployment benefits. 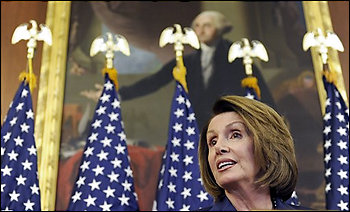 Photo: House Speaker Nancy Pelosi is determined to govern from the center. Picture courtesy of The Washington Post.

Photo: House Speaker Nancy Pelosi is determined to govern from the center. Picture courtesy of The Washington Post.

Beyond this, it is difficult to predict the path that Democrats will take. Despite favorable political conditions, Democratic leadership is hesitant to reach beyond the American comfort zone. "The country must be governed from the middle," House Speaker Nancy Pelosi (D-Calif.) said during a press conference on Nov. 5.

On a long-term basis though, issues such as healthcare, education, energy independence and Iraq remain high on the Democratic agenda. In her first post-election speech, Pelosi mentioned children's healthcare and stem cell research as key pieces of future legislation. Iraq's government has also reiterated its desire for a fixed withdrawal date for American troops, a demand that the government must deal with.

It is safe to say that this recent election has forced the Republican Party into disarray. Democrats, especially youth, have a rallying point behind President-elect Obama, arguably the most hyped-up pop culture politician since President John F. Kennedy. The tables are now turning on Republicans, who generated major youth support behind President Ronald Reagan in the 1980s and continued to reap the benefits in 1994, when the same base united behind Newt Gingrich's "Contract with America" campaign to create a Republican-controlled Congress. If Democrats can properly manage the support that they have cultivated, Republicans could be looking at political declines for the foreseeable future as their opponents replicate their strategies.

What is worse for the GOP is the lack of any unifying central figure. Now that the election is over, anonymous members of McCain's camp are attacking former vice presidential nominee Governor Sarah Palin (R-Alaska), alleging (even if falsely) that her knowledge of geography was so limited that she was unaware that Africa was a continent. Palin has responded to the allegations, telling reporters that her accusers were "jerks" and "cowardly." None of this helps the Republican cause, which continues to suffer from a lack of a model politician.

There are still a few bright spots for Republicans. They still possess control of the judicial branch of government, peppered with conservative judges after eight years of Bush appointments, which may allow them to combat Democratic initiatives through the courtroom. Also, despite Democratic gains, the majority party still possesses only 58 seats - two seats too few to cloture Republican filibusters.

To ensure a prompt recovery, the Republicans need to find a way to disrupt Democratic unification, which may be simpler than expected. Minority voters, who supported Obama overwhelmingly, sometimes possess conservative opinions regarding issues of morality such as homosexuality and abortion rights. For example, Proposition 8 in California, which banned gay marriage throughout the state, was passed due largely to the support of racial minorities. If Republicans, who have managed to cling to the votes of white evangelical conservatives, can transcend racial lines and expand their support, they could potentially kill two birds with one stone: diversifying their party and cleaving away support from their opponents.

Regardless of how politicians play their rather limited hand, one thing is for sure: the next four years will be an interesting ride for the left and right alike.