Pro athletes should be able to combine game and Twitter

On June 23 at 8:35 p.m., the tweeting world was abuzz. Bruce Manley, the official "King of H.O.R.S.E. Trick Shots," had just been offered $1,000 to defend his title. But it wasn't just any audacious ballplayer who offered Manley a large allowance for a little friendly competition; it was professional basketball player Shaquille O'Neal, ready to put his ball skills to the test. "I wanna play this guy n horse for a thousand dollars," Shaq tweeted. "Find him pls." 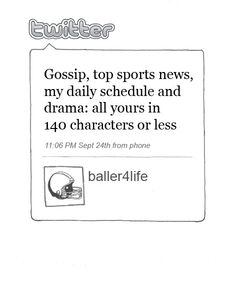 Photo:
Since its birth in 2006, Twitter has become increasingly prominent as a way for professional athletes to correspond with their adoring fans. More than 1,000 professional athletes regularly share post-game feelings, challenge other athletes, divulge important team events, provide insights into their personal lives and simply say whatever comes to mind. Tweeting offers a casual way to communicate authentically with fans without inaccuracies and tight parameters, something the media does not always provide.

Some athletes have wrongly mixed serious game time with Twitter escapades, and professional sports organizations have responded with tight restrictions regarding in-game Twitter use. While some may argue that professional athletes should not lose their game focus by succumbing to the calls of Twitter, players should still be able to use it to develop closer relationships with fans.

Achieving such casual intimacy via Twitter is easy, as professional athletes have accumulated huge fan bases. When Lance Armstrong proposed an afternoon bike ride around Phoenix Park in Dublin, hundreds of his more than 1.2 million followers met in Phoenix Square to share the ride. Such athlete-fan interaction is common in the Twitter world. Not only does this medium facilitate relationships, but sports players can also advertise ticket sales and announce game dates via Twitter, which advances the financial well-being of the sports industry.

Aside from its economic benefits, Twitter also provides professional athletes with a platform of expression for their true opinions and perspectives, unadulterated by invasive media scrutiny. Buffalo Bills linebacker Kawika Mitchell told the Buffalo Online that he appreciates the more casual communication with fans outside the media sphere. "There are things I don't necessarily say in the paper," he said. "So with Twitter I'm allowed to say some other things that are on my mind."

Some athletes may have taken tweeting too far, to the chagrin of sports officials. Charlie Villanueva stole into the Milwaukee Bucks locker room at half time last year during a game against the Boston Celtics, tweeting, "In da locker room, snuck to post my twitt. We're playing the Celtics, tie ball game at da half. Coach wants more toughness. I gotta step up." The message was simple, but Coach Scott Skiles was outraged, stating that Villanueva had distracted himself from the game and threatened the Bucks' well-being by prioritizing the tweet over the team.

But Villanueva proved that Twitter can actually have a positive impact on a player's attitude and performance. After posting his message, Villanueva finished the game by contributing 19 points to the team's 86-77 victory. While officials like Skiles may dub Twitter a distraction, Villanueva's 30 seconds of tweeting may have improved his game more than any halftime pep-talk.

Still, professional sports organizations are unenthusiastic about tweeting on the field. According to Buffalo News Online, the NFL has prohibited twittering during games, and Major League Baseball has banned all cell phone use within an hour of playing time. These regulations may have been created with the best interests of professional sports in mind, but Twitter is truly harmless. Tweets rarely contain the scandalous breaking news and shocking Ochocinco-esque comments that so often make media headlines. Instead, the messages are primarily mundane notifications portrayed as extreme because of the multi-million dollar celebrities who tweet them.

Jack Dorsey, the founder of Twitter, stated that his company's name means "a short burst of inconsequential information." Tweets are designed simply to facilitate casual communication without the accusatory scrutiny of the public eye. Sports fanatics should take advantage of this opportunity to meet stars like Shaq and Ochocinco on a more personal level; the athletes are more than happy to share their daily activities with people they know will appreciate them.