Adults everywhere bemoan the apathy and laziness of the new teenage generation. Cries of "When I was your age" call attention to apparent ignorance in teens, especially where current events are concerned.

This opinion was quashed somewhat when Obama's 2008 campaign revitalized and motivated young people, using more student volunteers than any election ever before and bringing back issues that pertain to students. But according to the PEW research center, the number of young Americans that are deeply invested in politics is dwindling. But although this generalization rings true for many high school students today, it's certainly not the case with all of them. 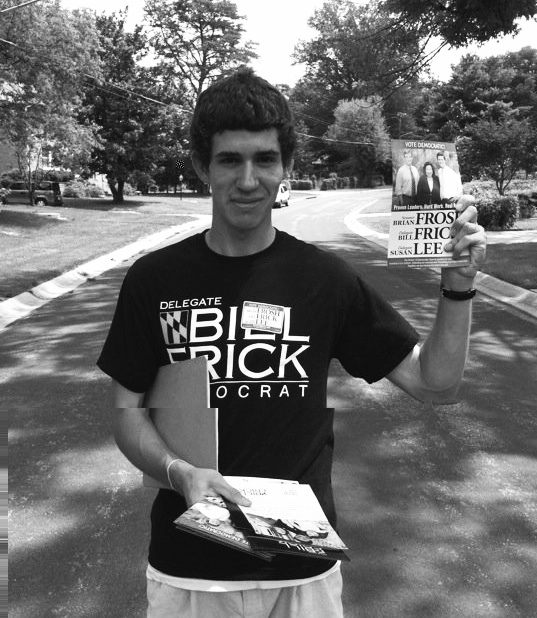 Photo:
Every June, National/State/Local Government teacher Lansing Freeman encourages more of his students to find local political campaigns to participate in over the summer, and every year a few will listen. Freeman believes that it is important that high school students stay engaged in politics. "A successful democracy requires citizens' active participation," he says. "Even though kids might not be old enough to vote, it's great that they can find a way to meaningfully participate."

So with Freeman's help juniors Nebiyu Fitta and Becky Vanarsdall found state delegate Tom Hucker and began work. Vanarsdall says that she decided to work for Hucker as a means to voice her beliefs, even without a voting ballot. "You can't vote until you're 18. But you can have an opinion before you're 18," she says.

Where some students like Fitta and Vanarsdall seek out politics, others have politics thrust upon them. For sophomore Tommy Raskin, participating in political campaigns has been an inherent part of his life since he was in the fifth grade.

Raskin is the son of the incumbent state senator Jamie Raskin (D-20). For four years he has handed out his father's fliers, stickers and grocery bags. He has attended political parties and fundraisers for campaigns. He says that the work he has done for his father has helped him learn about politics, but it has also become a point of bonding for the family. "It's definitely a family affair," he says, "We all do things to help." Over the years he has watched his father develop his key to success that has led him through one election and on to another. "He really cares, and for that reason he has become really popular," Raskin says.

Junior Daniel Hafner found his way into the campaign for candidate in the state delegate race Kyle Lierman because he believes firmly in that idea that politicians need to work for the people. He says that politics today has a very poor reputation. "They think it's money, they think it's power," he says. "And yes, there are some people who do it that way. But there are some people who do it right."

As the summer continued, Fitta and Vanarsdall were kept busy with work in preparation for the upcoming election. They attended fundraisers at local restaurants. At events like the Takoma Park Jazz festival, they handed out stickers and flyers to passersby. They helped with secretarial work in the office, programming poll numbers into computer databases or talking to people who walked in. But of all the many duties, they spent most of their time canvassing - knocking on doors within the delegates district and informing the voters about the candidate. "I liked going into the community, talking to voters," said Fitta. "It was interesting seeing what issues were important to them." 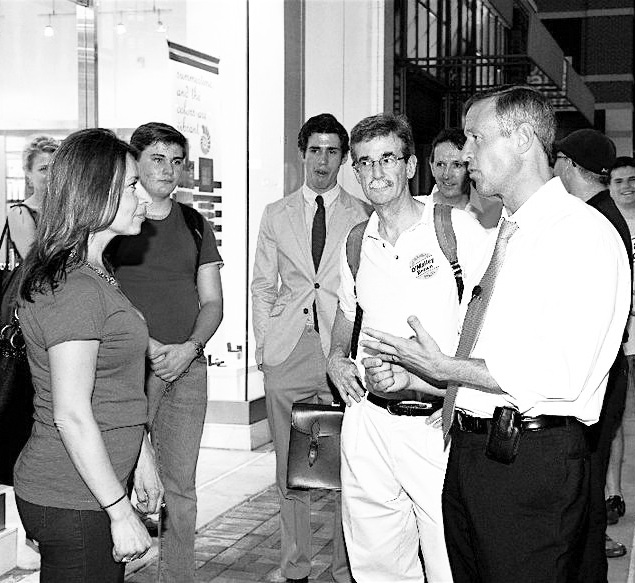 Junior Shayna Solomon was sick for much of her time working in the office of State Senator Roger Manno (D-19) this past summer. This made canvassing difficult for her, so while the rest of the campaign would go knocking on doors, she worked in the office. "I wrote for the campaign, mainly press releases," she says. "But I would also make fundraising phone calls, tape mail files, shred papers - once I cleaned the basement."

Hafner believes that since politics in America depends upon the people, if his generation is not sufficiently educated in politics and the workings of a democratic system, then the future politicians will walk all over the people. "We need to be able to call them out…this is our country, not theirs." Hafner is confident that someday he will return to politics professionally to make a difference in his own way. "I think I have something to contribute," he says. "I really do."

These Blazers gained more from their time shredding papers and knocking on doors than it may seem.

Solomon says that her work with the Mannos campaign has helped her grow. In campaign meetings she gained knowledge that she can apply to her work with Students for Global Responsibility (SGR). She organized a meet and greet at her house for Manno. Which gave her valuable experience she uses when helping to plan events for Social Action For Everyone, an interfaith group she founded with two other students. She says that even her odd assortment of jobs around the office has helped her learn organizational and administrative skills.
Raskin says that his involvement in his father's campaigns has shown him how much of local politics directly pertains to teenagers. "Almost everything I see when I am in the Senate pertains to kids," he says. "Crime, slots, education - they all affect us directly."

And Vanarsdall has discovered the importance of a good handshake. "People would come into the office and you would always shake their hand," she says. "I was so used to it that when I came into my English classroom on the first day of school I walked up to my teacher and shook her hand."

State senator Jamie Raskin has been promoting youth rights for his entire career, passing bills that allow students to register to vote in their schools at age 16 and privacy rights for students submitting tests to the army. He's done plenty of work for the youth of Maryland, and Maryland teens have repaid him through their dedicated campaign work. "When I ran in 2006, my campaign was overwhelmingly dominated by young people," he says. "They have been the life blood of my political campaign. They have the energy and imagination and idealism that make them very effective campaign activists."