Slam Poets in the DC area share their passion for poetry

White lights illuminate a black box indented into the green walls. A slim boy with short black dreadlocks that are decorated with flashy rings stands at the lonely microphone and paints horrific illustrations of the Ku Klux Klan (KKK) in Georgia. His voice cracks. His words are thick and carefully composed, and he speaks slowly to allow the audience to digest them. He flutters his hands the way a broken light bulb flickers. "You know the world has always been a vacant host," he whispers. Then he leaves swiftly from the stage. 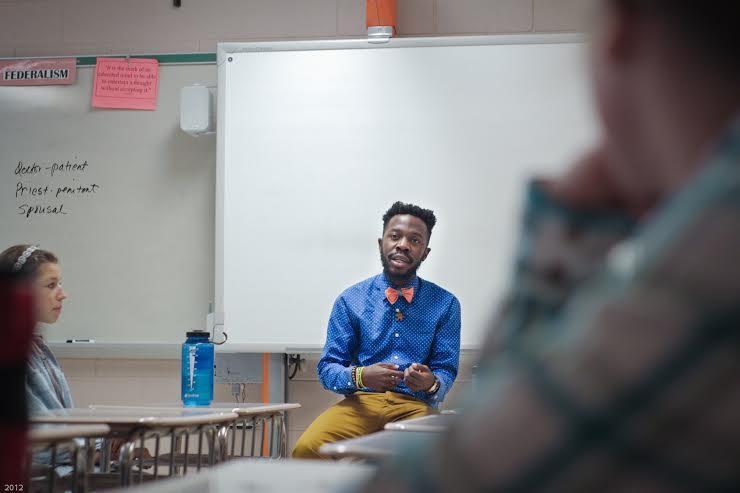 Photo: Pages Matam coaches the DC Youth Slam Team and co-coaches the Blair slam team, Compa$$ion fruit. As a poet, he's gone on tour and garnered over 1 million views on YouTube for his poem "Pinatas."

Photo: Pages Matam coaches the DC Youth Slam Team and co-coaches the Blair slam team, Compa$$ion fruit. As a poet, he's gone on tour and garnered over 1 million views on YouTube for his poem "Pinatas."  Photo courtesy of Sam Howells.

It's the Saturday Youth Open Mic at Busboys and Poets at 5th and K. Thomas "VOCAB" Hill has just shared a poem speaking as the cross of the KKK. The audience snaps and "mmm's" afterwards, which the D.C. Youth Slam Team describes as the "good chocolate sound." The heaviness of his poem lingers. He's the first of the night. Although the night is not exclusive to members of the famous D.C. Youth Slam Team, which recently garnered over one million views on YouTube for a piece on the gender inequalities of Halloween, they do sponsor the event.

Junior Kalanzi Kajubi reserves that the D.C. area has prominence in Slam culture. "People who live in D.C. are turned into issues. Because of that, whatever art exists here is of more substance." Spoken-word artist Pages Matam can attest to that. Matam coaches the D.C. Youth Slam Team and co-coaches the Blair slam team, Compa$$ion Fruit. His very nature is poetic. He dresses in dapper hats and bohemian outfits, and swings his head when he talks. He has a smooth voice and speaks slowly. A self-described "bowtie enthusiast, gummy bear elitist, anime fanatic, and professional hugger," Matam has recently gotten significant attention over his poem "Pinata," a painful testament against rape culture. The video of the poem collected over one million views on YouTube and 120,000 reblogs on Tumblr. Despite the fame, however, Matam remains modest. "I'm not famous but I have a video that went viral and it's been going crazy over Tumblr as well," he says shyly.

But instead it was he who fell in love when he got to high school and found slam poetry. "I was in like with poetry at first, but when I got to slam poetry that's when I became in love with it," he says. "It elevated that love to be in love. And I believe being in love is an action. There's an action that comes with it, and I think slam poetry brought that action to me." Slam poetry is powerful to Matam. It's a creative outlet that gives him a voice that he can share. "It's allowed me to connect with people and really learn, harness and focus my voice and speak up about certain things-speak up about social justice and issues and life and the change I would like to see."

One of the people Matam has connected with is 22 year old Brandon Douglas. Douglas is friendly, but still manages to radiate seriousness. Like Matam, he has the same slow, poetic aura in his voice. He thinks out loud as he stutters. He emphasizes the competitive nature of slam poetry. To Brandon, slam poetry is not spoken word. Slam poetry is the evaluation of spoken word on a scale from 1-10. "Slam poetry is the opportunity for people who are competitive to express themselves and just seem cool about it. That gives it a different energy and a different flavor." For Douglas, this isn't exactly beneficial. "I felt... I felt the competitive thing of it change my writing. I was trying to write to be impressive as opposed to being expressive, which isn't what I want," he admits. Douglas hasn't abandoned slam, however, and he doesn't disregard its significance in his life either. "I think the biggest thing is I've met a lot of people from a lot of different places because of slam poetry and them just being in it. I've met people from Sweden. I've met people from South Africa. I've actually gone to South Africa, and I'm extremely grateful for that," he says.

But in order to connect with others, a poet must first have people to listen. Sophomore Maris Medina joined Slam Poetry Club at Blair last year to find her voice. "Last November, I wanted slam poetry to help me be more outgoing. When I auditioned, I felt like I had a voice." Last year, Medina performed with Compa$$ion Fruit at LTAB, or Louder than a Bomb. Originating in 2001 as Chicago slam organization, LTAB gathers high school teams from around Chicago to compete, LTAB recently branched out to the DMV. For many slam teams and clubs in the area, LTAB is the end goal of all the hard work throughout the year. At LTAB, all the teams sat together and had a deep discussion about social barriers in DC. The experience further showed her how important poetry is to youth. "It is how we get through."

Although Slam Poetry is a beautiful medium for cultivating relationships between unlikely people, at its core, it's the discovery of oneself. Junior Aimee Idriss, manager of the 2013 LTAB team, doesn't identify as a poet, but when she does write, she feels authentic. "I don't feel like I have different identity as a poet, I just feel like a more genuine version of myself." Another member of the slam poetry club, sophomore Amanda Feinberg, sits riding the metro. She leans on the chair in front of her, tired. She rolls off her words, like liquid. Slam Poetry helps her discover herself. "I don't think another identity that this is who I am, I'm kinda tapping into that." She pauses. "I'm just confronting myself." Matam approaches the same concept from a different perspective. "There's the unknown self, the part that you don't even know about yourself" he says. "And I think especially writing has a way of helping you tap into that unknown self a lot, and that's what comes out. And that's the zone that I'm in."