Wiz Khalifa and Mac Miller bring their flows to Baltimore

Rocking an Orlando Magic snapback, Jordans and a pair of baggy Levis, a tall, rail-thin body emerged onto the stage behind a cloud of smoke. Amid throngs of cheers from his faithful "Taylor Gang" fan base, Wiz Khalifa jumped into his hit song "Burn After Rolling" from his 2009 mixtape of the same name. "It ain't new to me, that money boy I been ‘bout/throwin' hundreds on the floor I tell her keep count," the Pittsburgh emcee bellowed through the mic. Fans bobbed their heads to the sampled beat of Pink Floyd's "Keep Talking."

23-year-old Khalifa, who's been in the rap game since 2005, attracted serious attention across the country in April after the free online release of his eighth mixtape, "Kush and Orange Juice." Since then, he's sold out every stop on the "Waken Baken Tour," and his single "Black & Yellow" just went platinum.

Khalifa and fellow Steel City rapper Mac Miller came to Rams Head Live in Baltimore on Dec. 28 and wowed the audience with a rare combination of flow, stage presence and swagger. Miller opened the show, and after a 45-minute interlude during which Pittsburgh's DJ Bonics showed off some skills on the turntables, Khalifa hit the stage. From the start, he had the crowd hooked with catchy beats off the tracks of "Kush and Orange Juice." His lyrical flow was smooth. "Self-made ‘G', did everything on my own, brah/in my early twenties with money as wide as Oprah," Khalifa boasts in "Never Been."

Though his raps rarely focus on matters besides drugs and girls, Khalifa proved to be the ultimate showman. Just like Miller's charismatic and energetic opener, Khalifa offers maximum effort on each and every track he performs, whether it be hyping up the crowd during songs like "In the Cut" or providing fun gimmicks like throwing his shirt off-stage to reveal his tattoo-laden body for "Ink My Whole Body." The climax of the show came when Khalifa performed "Black & Yellow," the Pittsburgh theme song. Save for a few Ravens fans, who booed when Khalifa waved a terrible towel, the entire place was bouncing as soon as the song hit its chorus. Wiz ended the show with a word of thanks for all who came out in support, and finished with "This Plane," a classic from his 2009 album, "Deal Or No Deal." 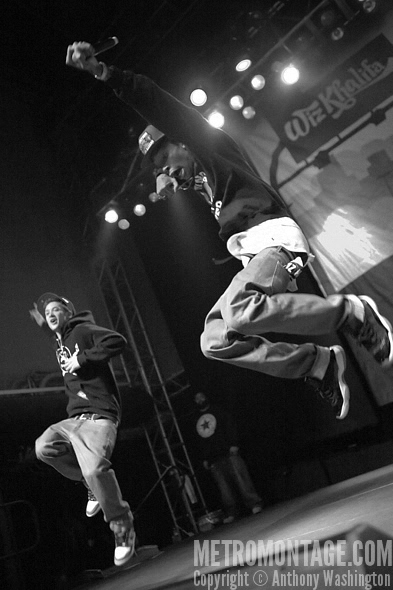 Although the artist's subject matter is less than original, what he lacks in lyrical ability, he make up for in his care-free persona and laid-back demeanor. Simply put, Khalifas's a likable guy. Those attributes translate into a solid performance, which is hard to come by in our generation's hip-hop era.

And Miller, just six months removed from graduating high school, performed first and got the crowd rocking to lyrically potent songs from his August mixtape, "K.I.D.S." Although much of the crowd came first and foremost to see Khalifa, Miller won everyone over with energy, charisma and lightning quick flow. "Takin' sips from the fountain of youth/if you ain't heard about the kid then you outta the loop," Miller spits in one of his more popular songs, "Good Evening."

And the 18-year-old wasn't afraid of the spotlight. In fact, acting quite the opposite, Miller bounced across the floor delivering line after line with the polished rap skills of someone twice his age. Not only did Miller put forth a dynamite performance, he was also having a blast. He ran around and used every square inch of stage to connect with the crowd. He went through most of "K.I.D.S.," a tape featuring hits like "Nikes On My Feet" and "Don't Mind If I Do" that went viral. The audience reciprocated his energy. Fans jumped up and down in the jam-packed venue for nearly all of Miller's 30-minute set.