The wrath of the critic

If the first "Clash of the Titans" movie was not any good, what makes one think the director and producer were any smarter in making the second one? With a $150 million budget that was not spent on a decent acting coach, a screen writer or even a fact checker, no one has learned a thing yet about Hollywood sequels. Directed by Jonathan Liebesman and produced by Basil Iwanyk, "Wrath of the Titans" is a mediocre fantasy that tries to get away with most of the flaws in the last film and fails to come up with anything innovative.

From here, the flaws get larger and larger like an avalanche of mistakes and cinema blunders. To start off, the cast of actors in this film were as lifeless as a ghost town. While actors such as Liam Neeson have a trademark of being the cold, calculating characters, not everyone in this film needs to be like Neeson. When his son was not around, which was a good 95 percent of this film, Sam Worthington acted emotionless and unconcerned, rarely budging his face unless it involved an action scene. The only actor who seemed to put a smile on his face was Toby Kebbell, who played Agenor, the demigod son of Poseidon, but even he could not invigorate this movie to make the dialogue interesting. Because their acting was so passive, the lines most actors in this film were also uninspiring and unimpressive. 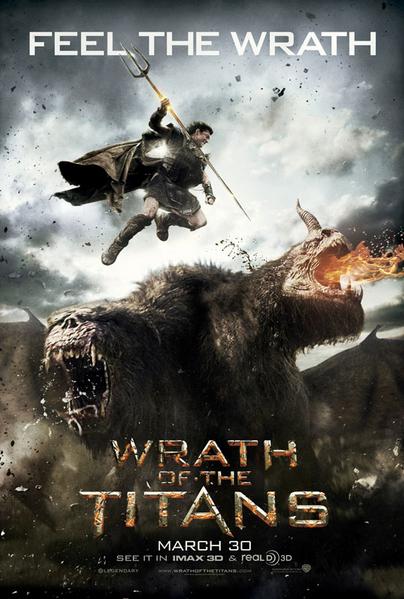 Wrath of the Titans poster

Photo: The cinematography and special effects were some of the movie's more redeeming qualities.

Photo: The cinematography and special effects were some of the movie's more redeeming qualities.

For an action-packed mythological fantasy, "Wrath of the Titans" has a huge pacing issue as it makes the mistake of starting off really slow. While there are impressive camera shots, the producers seem to put all the money in the wrong places as he cares more about how the movie looks then how the movie feels. An hour into the film there were barely any action sequences to help propel the interesting exposition, as most of time was spent explaining the mythology and complexity of the plot. Until the audience members reach the last 40 minutes of the film, they will be sitting through very awkward character development and screenwriting.

Another flaw in "Wrath of the Titans" is its mythological blunders and inaccuracy that plague the storytelling and writing. The problem here is not adding new Greek folklore to the impressive mythology, but rather inventing a piece of folklore and violates and obscures preexisting ones with misinterpretations and false information. When Perseus and Agenor go to the island of Hephaestus, the narration claims that Hephasteus was the god that invented Zeus's thunderbolts, Poseidon's trident and Hades's pitchfork, which together combined into the Spear of Triam and was responsible for sealing away Kronos long ago. First, while Hephasteus was a brilliant blacksmith, he was not alive at the time to create these weapons, as these weapons were forged by the Cyclops and the giants when Zeus freed them from the Tartarus. Second, the weapon crafted to Hades was not a pitchfork, but rather the Helm of Darkness, which allowed the user to become completely invisible, even to the eyes of the Gods. Lastly, the Spear of Triam was never put together to seal away Kronos during the first war with the Titans, as such a weapon never existed in the first place. Small mistakes that were also made in this film is having Pegasus's skin grey and black when its color palette should have been brilliant white and making Kronos look like a lava golem when he should be looking more human-like. If the film producers wanted to make a movie using three weapons combining to defeat a monster, For a film that at first glance looks so rich with Greek mythology, the foundation that it builds a story off on crumbles as these alarming inaccuracies hurt its credibility as a Greek raconteur.

While there are good elements in film and some of the flaws seem nitpicky, the fact is this is not a movie you want to pay money to go see. For $15, what you get is a stale, uninspiring mythological fantasy with poor acting and screenwriting that feels like a poor man's "God Of War." Unless you have literally nothing else to do this Spring Break, put your money down and save it for the real blockbusters in the summer.

"Wrath of the Titans" (99 min) is rated PG-13 for intense sequences of fantasy violence and action. Now playing in theatres everywhere.

Tags: Wrath of the Titans