Roman Catholic, Quaker, Methodist, Episcopalian. Throughout history, presidents of the United States have been associated with various religions which have consistently played a role in how Americans vote. But up to this point, no president has openly declared himself to be Muslim, Jewish, Mormon or Buddhist. However, in the 2012 presidential race, two candidates who have openly declared themselves as Mormons have the potential to break the cycle. But this change raises the question – are Americans ready to put religion aside and elect a Mormon for president? 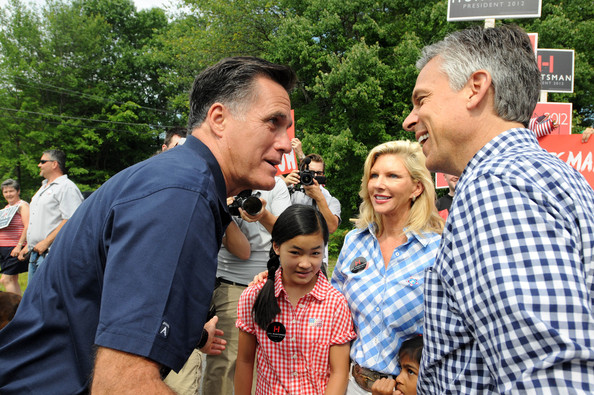 Photo: Former Massachusetts governor Mitt Romney (L) and Former Ambassador to China Jon Huntsman (R) greet each other prior to marching in a Fourth of July parade in Amherst, New Hampshire.

Photo: Former Massachusetts governor Mitt Romney (L) and Former Ambassador to China Jon Huntsman (R) greet each other prior to marching in a Fourth of July parade in Amherst, New Hampshire. Photo courtesy of Getty Images.

Mormon Republican candidates Mitt Romney and Jon Huntsman are both front runners in the 2012 presidential election. But both are determined to quell media controversy in the face of their religious views. Romney, who is a member of The Church of Jesus Christ of Latter-Day Saints (LDS Church), has avoided speaking publicly about religion, but has implied that his beliefs will not affect his decision making abilities. Huntsman, who is also a member of the LDS Church, has openly stated that his religion does not control his life and that he is more spiritual than he is religious.

Ultimately, neither candidate wants their religion to interfere with their public appearance, but it may be too late. A Gallup poll taken in June 2011 found that roughly one in five Americans would not vote for a presidential candidate who was Mormon. These public opinions have certainly raised concerns for Huntsman and Romney and their futures in the presidential race.

Personally, I believe any individual running for office should have their integrity, leadership, knowledge and religious affiliation looked upon equally. Religious views will inevitably influence opinions and views on various topics, especially when dealing with controversial issues. Although the Constitution states that religious affiliation cannot keep a candidate from public office, it doesn't mean that a president's religious views, whether Mormon or Christian, will not cloud their judgment in some shape or form.

If a candidate is able to push his or her religious views aside and deal with issues both professionally and reasonably, then any religious background is more than acceptable in my eyes. Better yet, maybe the key to a successful presidential candidacy is simply keeping religion out of the race. This year's Republican contest could be America's religious litmus test.