Remake of classic film is sure to be a hit

When someone mentions "King Kong," usually the first thing that comes to mind is a huge gorilla pounding his chest on top of the Empire State Building. With Peter Jackson's "King Kong," the story goes much deeper into the mind of the huge, infamous gorilla.

"King Kong" is a remake of the original. The movie opens in New York City, where actress Anne Darrow (Naomi Watts) performs vaudeville. Aspiring director Carl Denham (Jack Black) gives Darrow an opportunity to be in a film, and she agrees only because of her admiration for Jack Driscoll (Adrian Brody), who wrote the screenplay for the film. 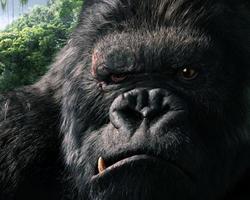 Photo: The infamous monkey in a remake of the classic "King Kong."

Photo: The infamous monkey in a remake of the classic "King Kong."

As they set sea to film the movie, they end up on an uncharted island. The voyagers set forth on the island and encounter inhabitants who attempt to kill them. The villagers take Darrow captive and sacrifice her to King Kong. As their lives are turned upside down, the crew must try and save Darrow while fending for their lives, so that the crew can eventually make it home. In the process, Darrow falls in love with the Gorilla, causing a stir among all.

"King Kong" is an incredible film that incorporates comedy, horror, action and romance. The special effects of the movie are excellent. The creatures that lived on the island were incredibly realistic, not to mention horrifying. At some points, it's easy to forget that King Kong doesn't have real emotions, and that he doesn't actually exist. Another impressive part of the special effects are the dinosaurs who chase the crew around the jungle for what seems like hours on end.

Another of the strong parts of the movie is the romantic energy between King Kong and Darrow. Though almost impossible to believe, the two characters have a tremendous amount of chemistry, and Watts does a superb job throughout. If anyone can convince an audience that a beautiful young woman can fall in love with a gorilla, it's Watts. In fact, scenes between Darrow and the gorilla were more romantic than the scenes between her and Driscoll, despite the fact that Driscoll is a real human being.

Although the comedic portion of the movie was not a large focus of the film, there are definitely funny parts in the movie. When the shipmates are being chased by dinosaurs, and all are running for their lives, the head cook on the ship is running as fast as his feet will take him, while puffing on a cigarette.

Despite the good parts of the movie, there were also a few parts that were too much. The movie was three hours long, which even for an epic is lengthy.

Some portions of the film were extremely gruesome. When the group is attempting to escape from the jungle, huge slug-like creatures emerge from the ground and start sucking some of the crew's limbs into the creatures' mouths. Not only is it disgusting, but the audience never really gets to breathe a sigh of relief during the lengthy action packed sequence.

Although most of the actors played their roles well, Jack Black is a little out of his league. He did make a good effort, but his history for playing ridiculous roles sets a precedent that is difficult to erase. Right after Black makes a serious remark, it's almost expected that he'll follow up with some extremely crude joke.

Overall, "King Kong" is an excellent movie. The stronger parts of the film fiercely overshadow the few weak parts, making it is easy to get entranced in the plot. With action, followed by romance and mixed with comedy, there's a little something in the movie for everyone, even if it does take three hours to find it.