Predictable and cliché plot takes away from movie

Most chick flicks are predictable stories ending with a typical Disney-styled happily-ever-after, but what distinguish the good from the horrible are originality and a unique moral. "Bride Wars" lacks both, and even the queens of romantic comedies, Kate Hudson ("How to Lose a Guy in 10 Days") and Anne Hathaway ("Princess Diaries"), can't save the movie from its mundane and sexist plot. 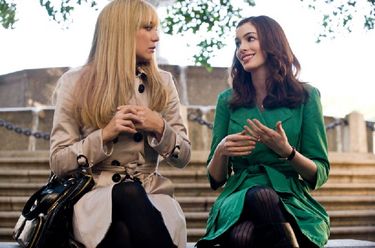 Photo: "Bride Wars" tests the friendship of two BFFs (Kate Hudson and Anne Hathaway) who are torn apart when their weddings are double-booked and neither is willing to give up their wedding date. Picture courtesy of Twentieth Century Fox.

Photo: "Bride Wars" tests the friendship of two BFFs (Kate Hudson and Anne Hathaway) who are torn apart when their weddings are double-booked and neither is willing to give up their wedding date. Picture courtesy of Twentieth Century Fox.

Two childhood best friends, Liv (Hudson) and Emma (Hathaway), share the same dream: to hold their weddings in June at the Plaza Hotel. Both girls become engaged and happily make plans for their back-to-back weddings until suddenly, a crisis strikes and "one of us" has to give up their wedding date for "the other one of us." What ensues is a major cat fight as the girls try to sabotage each other's weddings that lasts until the big day.

From the very beginning, the female stereotypes displayed in the movie are disturbingly sexist. Hathaway portrays the typical meek, kind schoolteacher who always lets others have their way in order to please everyone. Hudson, at the opposite end of the spectrum, is the young, aggressive lawyer who always gets her way and never "settles." Emma and Liv become two perfect labels for women with their incessant shopping, opposite personalities and most importantly, their standards for the perfect wedding.

The plot is equally unoriginal, where everything happens as expected without any twists or turns. In a wedding movie, it'd make sense for the grooms to play a larger role but alas, not in "Bride Wars." Instead, the shallow storyline focuses purely on the women and their fanatic obsession with weddings rather than the bonds of tested friendship and love. While the story is well-paced, the unrealistic story makes it hard for readers to empathize. One minute, Emma and Liv are friends for life, the next minute, they're insulting each other and pulling devilish pranks from orange tans to blue hair, comparable to the immature shenanigans in "Mean Girls." There is no time to dwell on the changing relationships between the bride-to-bes and their fiancés, and no time to see the supposed growth of the two main characters.

Although placed in a realistic New York setting, the whole story seems to be more of a fairytale like "Enchanted." The story is even narrated by Candice Bergen, who plays the famous wedding planner Marion St. Claire. Though cute at first, the occasional and unexpected bland one-line commentary becomes annoying. Then, there are the blurry photo montages that help tell the story like some sort of fable. Both the narration and the montages detract from the overall movie, only annoying spectators who want to see actual acting.

Thankfully, the acting was better than the plotline and helped to redeem the unfunny comedy. Hudson, with her thick mascara and frowsy blond hair, does a decent job portraying Liv with her crude, aggressive yet sensitive personality. However, she lacks the depth of Hathaway, who has proven herself worthy of even shallow roles. As Emma, Hathaway manages to convince viewers of her coexisting kindly and feisty sides. Both actresses are pleasant on screen, making the movie somewhat endurable.

The actors of the movie, Bryan Greenberg as Liv's brother and Chris Pratt and Steve Howey as the bridegrooms, lack the roles to impress in "Bride Wars" though they each play their characters effectively enough to give the audience an idea of what's happening even with the undeveloped plots. But the actress who steals the show is Kristen Johnston, portraying Deb, Emma's fellow schoolteacher, maid of honor and obnoxious bully. Johnston provides the perfect comic relief as an outrageously self-centered and bratty woman who enjoys voicing her opinions and taking advantage of free champagne or wine.

Without a proper plot, "Bride Wars" can only be considered mediocre at best, even with the superb cast list. So unless viewers are love-struck middle school girls or true saps looking for a feel-good movie, please leave "Bride Wars" at the altar.