"License to Wed" shouldn't sell itself so short. Its trailers showcase some of its worst aspects – crude innuendo and obnoxious physical hijinks. Its release date was a Tuesday, which in the movie realm is often code for "awful." On the surface, it radiates more dreadful "Monster-in-Law" than intelligent "Meet the Parents." 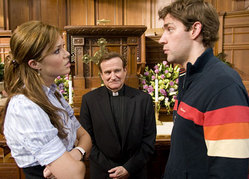 Instead, from the opening sequence – in which Reverend Frank (Robin Williams) compares marriage to "sticking your tongue to a frozen pole" – to the hilarious outtakes after the credits, director Ken Kwapis creates a delightful romantic comedy with plenty of humor and surprisingly few "roll-your-eyes" moments.

Before engaged couple Ben Murphy (John Krasinski, "The Office") and Sadie Jones (singer Mandy Moore) can get hitched at Sadie's childhood church, they must pass a marriage prep course led by the invasive Reverend Frank. Frank puts their relationship to the test with outrageous relationship exercises, including robot babies, blindfolded driving and electronic apartment surveillance, that seem intent on tearing the couple apart.

Sure, the storyline is nothing new or inspired (if you think about it though, it's darkly twisted). There are holes, but the movie is also a whole lot of fun.

Kwapis, who directs "The Office," campaigned for Krasinski in his first leading role, not a far stretch from his low-key boy-next-door Jim Halpert on the NBC hit. And lead he does. Krasinski's subtle comic genius balances Williams' outlandish humor, which has always been more suited to oddball dramas than to mainstream comedies. As the king of the awkward moment, his natural "wait, what?" moments score the most laughs (I could have sworn I saw Krasinski flash the notorious Halpert grin at least once).

There's not much to Moore's naïve character, and there's not much to her acting. Like her pop albums, she's all bubblegum and no substance. Luckily, it's bearable in this context. The movie ultimately rolls along smoothly because Krasinski and Moore make a compelling couple. The characters are not always likable – as in any relationship, they both have inherent flaws – but the actors are. Acting chops aside, the duo exudes enough stunningly good looks and credible romantic chemistry to make any girl swoon.

A plethora of recognizable guest stars pop up to keep the plot fresh. Some of the best moments are visits from Krasinski's "Office" mates: Brian Baumgartner (Kevin) eating potato skins off the floor in group therapy, Angela Kinsey (Angela) as a precocious jewelry saleswoman and Mindy Kaling (Kelly) as, surprise, a yappity wife. "License" also boasts appearances by comedians Wanda Sykes, Bob Balaban and Rachael Harris.

The movie suffers occasionally in scenes where Kwapis goes over the top with unfunny slapstick, but it is clear that "License" is more than just a stupid summer chick flick. It may not be wedded bliss, but it's a pleasant surprise that should not be left at the altar.

"License to Wed" is rated PG-13 for sexual humor and language and is now playing everywhere.