AP tests should be left in the dumps

Pain and stress are etched on students' faces as they lug heavy stacks of books, ranging from English literature to chemistry to art history, around school. It's nearly May, and although April showers will bring May flowers, they also carry something more ominous to high school students around the nation - AP tests. 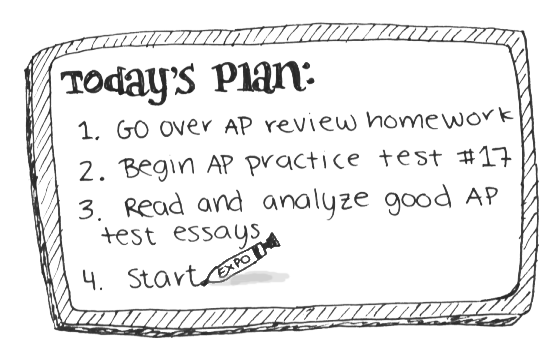 The Advanced Placement (AP) program, sponsored by College Board, brings college level courses into high school classrooms. Along with AP courses, College Board also produces AP tests, which allow students to gain college credit for 22 subjects. For the class of 2008, Maryland had the highest passing rate on AP tests, according to the Washington Post - but the costs are not worth the statistic.

Because of AP tests, students have focused too intently on the number of tests taken rather than the retention of AP material. Teachers also sacrifice extra curricula in order to cover AP test topics. While AP courses are important and valuable, AP tests, which detract from the value of education, should be eliminated.

The incessant buzz to cover all material on AP tests frequently causes a decline in quality of several aspects of teaching. First, teachers may find themselves forced to follow the suggested syllabus outlined by College Board.

Although AP World teacher Rondai Ravilious believes the College Board curriculum for world history is comprehensive, there are many times when she has moved onto new topics quicker than preferable to accommodate the May AP exam. "We should be teaching world history, and AP tests should be secondary," Ravilious said. Although AP classes expose students to new and challenging coursework, the corresponding AP tests can limit the information teachers want to emphasize and the information students actually learn.

MaryAnn Dvorsky finds herself running after time during her second semester Magnet Analysis of Algorithms course, which prepares students for the AP Computer Science AB exam. "In second semester, the course has to cover material quicker [than the first semester course]," Dvorsky said. With the elimination of AP tests, however, the frantic dance to cover all the AP material can be slowed down.

Perhaps the most serious consequence of AP exams is the emphasis on the wrong part of education - quantity over quality. Amid Montgomery County's obsession with AP testing, increasing numbers of students are taking AP tests not to be challenged but to boost their individual AP test count. One aim of APs, as noted by College Board, is to "learn from the most skilled, dedicated, and inspiring teachers in the world." However, many students opt out on the potential educational value gained through AP classes, deciding instead to self-study and take multiple tests in order to up their number of APs.

In order to look appealing to colleges, sophomore Guodong Fu plans to take nine APs in his junior year. "If you don't take that many APs, colleges won't be as accepting. But if you do take that many, you're opening doors," he said. Like Fu, numerous students take AP tests without enrolling in the courses and without regarding the loss of valuable classroom experience, simply to improve their resumes. For the sake of college transcripts, true education is lost in translation due to AP tests. 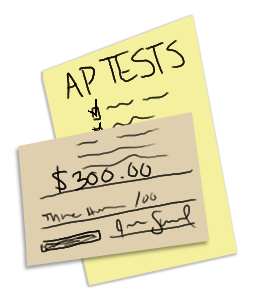 Despite the problems with AP tests, the exams do provide two important purposes: standards and motivation. "I think the tests serve as a good incentive. Without the tests, people wouldn't learn as much," AP social studies teacher David Swaney said. Yet, in an age of college-driven students, the educational value provided by AP coursework - although hidden by excessive AP testing - is too great to be overlooked. Getting rid of AP tests and placing emphasis on AP classes can provide a solution to the tricky problem.

Supporters of AP tests believe that AP tests serve two important functions - a means to quantify knowledge and a motivator to learn. However, if increased in difficulty level, AP classes can maintain the essence of these vital features provided by the exams. First, AP classes can act as indicators of success or failure by themselves, just as a score of 5 or 1 on an AP test does. Doing well in challenging AP classes equates and even goes beyond performing well on an AP test. Swaney believes, for example, that getting an A in an AP class is similar to getting a 5 on the exam. Additionally, robust emphasis on AP classes will motivate students to do well - not just on a culminating AP test but in class. Students will especially feel enticed to learn if they earn college credit for the classes. Hence, removing AP tests does not take away the advantages provided by these tests. Benefits after elimination of AP tests are still preserved through AP classes.

In an ideal world, AP tests should be eliminated. Discarding these tests would mitigate time and curriculum issues for teachers, enabling more freedoms in teaching and learning. Also, with the elimination of AP tests, students can keep $86 or more, as well as end an incessant drive to take more tests just to receive an award. But in just a few weeks, Blair students will join thousands across the country in last-minute studying before the dreaded AP tests in the first weeks of May - but hopefully the policy will be reconsidered in the future.