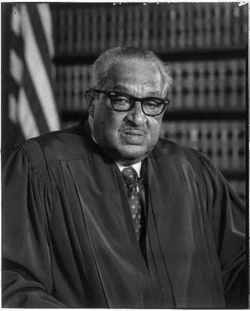 Photo: Thurgood Marshall, the first black judge to be on the Supreme Court.

Photo: Thurgood Marshall, the first black judge to be on the Supreme Court.

Despite facing racism, Thurgood Marshall rose through the ranks to become the first black judge to be on the Supreme Court. Before becoming a justice, Marshall's most important case as a lawyer was the landmark civil rights case Brown v. the Board of Education.

Marshall was born in the early 1900s, the grandson of a slave. Through his studies, Marshall soon gained respect for the law from his father. He applied to the University of Maryland law school to puruse his interest in law but was rejected based on the color of his skin, an experience that angered him and would play a major role in his future.

Eventually, Marshall earned his law degree from Howard University thanks, in part, to the support of the dean, Charles Hamilton Houston, who convinced his students to strictly believe in American law and the Constitution. Houston also influenced Marshall to get involved in promoting civil rights for blacks.

Marshall's first significant court victory came against the University of Maryland in which Marshall argued that his client had been unfairly treated and rejected from the school because of his race. During Marshall's law career, he would win 14 out of 19 court cases in front of the Supreme Court, making him the most successful American lawyer to argue before the Court. In 1967, Marshall was appointed to become a justice on the Supreme Court, a position he held until his retirement in 1991.

Information has been compiled from Center for History and New Media.