The Bush administration must work with EPA to regulate greenhouse gases 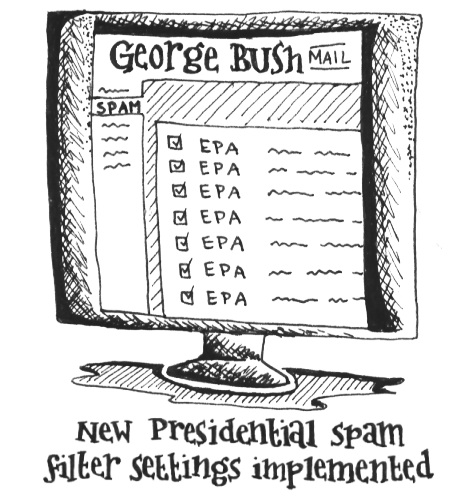 But it is the sole purpose of the EPA to directly address any threats to human health and welfare in relation to environmental changes. After eight years of remaining somewhat silent of the matter, it is time for the Bush administration to work with the EPA to finally implement new rules to lessen the inevitable effect of global warming.

Since 2000, the Bush administration has not taken much action to alleviate the concerns of global warming. In 2000, the administration stated in press conferences that they did not feel that they had enough facts to take a course of action despite the many warnings of the danger of global warming from environmental scientists around the world. In 2001, they stated that they were in the process of building a strategy to target global warming. In April of 2007, the Supreme Court finally pressured the EPA in a 5 - 4 decision to determine whether greenhouse gases were harmful to human health, according to the July 11 Washington Post article.

As if saving the earth wasn't incentive enough, the EPA's analysis proved that stricter regulation of greenhouse gases would result in many economic benefits to the U.S. such as saving the country about $2 trillion by the year 2020. The EPA also concluded that ignoring the effect of these pollutants on global warming could ultimately result in droughts, flooding and negative harmful effects on water and food supplies.

The EPA emailed the White House a document with their findings, declaring that greenhouse gases were pollutants and strongly favored regulating those gases in December of 2007. The Bush administration, known for its maturity and sophistication, dodged this proverbial bullet by refusing to open the email. Even more disappointingly, the method worked. The EPA rewrote and eliminated "large sections of the original analysis that supported regulation," according to the June 25 New York Times article.

In the Supreme Court case of Massachusetts v. EPA, the court ordered the EPA to determine whether or not greenhouse gases were harmful to human health. Environmental scientists and climate change experts have been forcing the idea of "going green" on almost every available public medium. You have to hand it to the Bush administration; it takes a lot of talent to ignore an international movement.

After eight years of brainstorming, strategy building and spit-balling ideas, the Bush administration needs to begin taking action to lessen the effect of global warming by either formulating their own plan of action or by following the advice that environmental scientists, climate change experts and the Supreme Court have been pressuring them to since 2000.

Allowing the EPA to officially state that greenhouse gases and global warming will inevitably hinder human health would lead to an increase in government regulation and cost utilities, automakers and other certain shareholders billions of dollars, according to the Bush administration. Rather than taking on the hefty challenge of protecting the well-being of the American people, the current administration has chosen to defer responsibility onto the next president's administration.

Instead of than facing some controversy and opposition from anti-regulation beneficiaries, the Bush administration is choosing to make the next president a martyr for the cause of global warming. The first president to support regulating greenhouse gases will undoubtedly be fought and opposed by those who do not support regulation and from those who prefer a more "hands-off" government.

However, with their time in the White House declining faster than Dick Cheney's hairline, the Bush administration officials should be mature enough to be more concerned with preserving human health and welfare than they are with ending on a good note.