Gogol Bordello, a "Gypsy punk" band out of New York City's Lower East Side, rocked the 9:30 Club in a sold out show Tuesday night. With Eugene Hütz as frontman (you know him as Alex, the interpreter from "Everything is Illuminated"), Gogol Bordello is comprised mostly of Eastern European immigrants, and their music borrows heavily from Gypsy sound, mixed with The Pogues-esque punk with The Clash overtones.

The opening band, Valient Thorr, took the stage like some sort of Spinal Tap wannabe, screaming and shrieking their way through their set, with long intermittent breaks to strip and give rambling politically charged speeches without direction or even a real message. At one point the lead singer, "Valient Himself," jumped from the stage and had the entire audience kneel down on the floor as he began to rant about the National banks, sweating profusely and making little sense. It was not until the end of their set that they finally pulled it together enough to play some decent punk music, inspiring the first mosh pit of the evening. 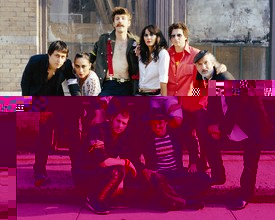 Photo:
Whatever the strength of the opening act, Gogol Bordello was more than worth the wait. They took the stage with a fiery passion and enthusiasm that lasted through the entire show, sweeping the audience up and inspiring a mad stage rush that left the crowd packed tightly and upped the temperature more than a few degrees.

With eight members, including a violin and accordion, the Gogol Bordello circus proved to be all party, all the time. Hütz danced, sang, played, kicked, gyrated, jumped, twisted, hopped and shouted with a contagious, explosive energy and backed by an equally vigorous ensemble. Violinist Sergey Rjabtzev played so hard and fast he shredded his bow, while backup dancers dressed in some variety of lamé football uniforms (that would not have looked out of place on American Apparel mannequins) played musical washboards labeled "Pamela" and "Elizabeth."

Defying musical categorization and technical restrictions in the name of fun, Hütz and Co. worked the audience into a mass of vertical motion as they blasted their way through hits like "Not a Crime," a Ukrainian punk-rock rollercoaster, and "Stop Wearing Purple," accompanied by the entire audience.

The loud, infectious rhythm and overpowering energy of the entire band made it impossible to stand still, and the audience responded in the nature of people at punk shows, moshing, thrashing, jumping, crowd-surfing and head-banging with such abandon as to leave few unbruised by the evening's end.

After blasting through an hour-long set, Gogol Bordello played a half-hour encore, to the crowd's delight. Throughout the evening the band-audience interaction was key; Hütz repeatedly stepped onto the barrier to grasp and slap hands with his adoring pit, and at one point one of the backup dancers/percussionists threw her drum into the crowd and climbed on top. She continued to beat on it, supported by the writhing crowd beneath her.

The entire show was laced with similar stage antics, and, despite their boisterous behavior, Gogol Bordello managed to churn out some quality punk music. Every song highlighted the atypical combination of instruments.

What is truly remarkable about Gogol Bordello is their accessibility. They are a punk band at heart, but you don't have to like punk to appreciate them, nor do you have to be an under 21 year-old mosher; the balcony was lined with older people just there to enjoy the music. Whatever the vantage point, Gogol Bordello was an experience, perfectly fitted to the intimate 9:30 Club venue.