The financial office reported a dramatic drop in the amount of obligations owed by students. The decrease is likely due to changes in school policy, according to Donna Franklin, financial secretary. 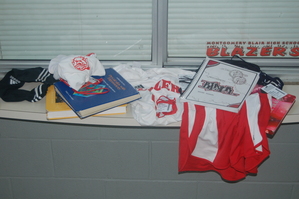 At the end of the 2005-2006 school year, obligations totaled $109,000, the highest amount ever. To remedy this figure, the financial office and the administration set up several initiatives to push students to pay back their obligations.

The new ID policy does not mandate that students buy a new ID every time they are forgotten. In addition, the administration now requires that students pay off their financial obligations before they can go to homecoming or prom, according to Franklin.

Coaches have also gotten involved - they are allowed to require athletes to be obligation-free before participating in a sport.

Still the most effective way of getting students to repay their debt is the threat of not being able to walk at graduation, according to Franklin. A few months before graduation last year, the financial office sent notices to seniors with obligations.

"Seniors are sadly the only ones that pay their obligations, because they have to," said financial assistant Donna Franklin. "And we have more ways of reaching them, [whether it is] robot-calls, notices home, prom or graduation."

Other area schools have employed different strategies in dealing with financial obligations. At Northwood High School, names of students with obligations are posted on the wall. Other schools, including Walter Johnson High School, post the individual's ID number, last name, class subject and fees owed.

Such programs are unlikely to be implemented at Blair. "I don't think it's right for people to see what another person owes," Franklin said.

Total obligations are calculated at the end of the school year, when teachers can add lost or stolen textbooks or fees to the list of financial obligations. Although this leads to a spike in owed money, the number decreases as seniors rush to pay obligations.

By the end of the school year, the financial office would like to see further decreases in obligations. "I would be happy to get under $70,000, I would be ecstatic to get under $50,000," Franklin said.