Students who came to school Oct. 22 saw a new addition to Blair's student parking lot: a totaled car from a young adult's recent fatal accident induced by drunk driving. The SGA ordered the car from the Montgomery County Police Department (MCPD) to remind students throughout the homecoming week of the severity and dangers of drunk driving. 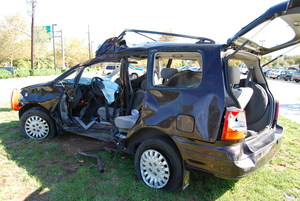 Photo: The SGA placed a wrecked car from a drunk driving accident outside Blair to warn students about the dangers of mixing alcohol and driving.

Photo: The SGA placed a wrecked car from a drunk driving accident outside Blair to warn students about the dangers of mixing alcohol and driving.

The placement of wrecked cars on school grounds, a popular new action throughout Montgomery County schools, is a method for striking fear into student's minds of what could happen homecoming night if things got out of control. "The car is a means of safety… it's a graphic illustration of what we're worried about," said co-president of the PTSA Bob Gillette.

At the SGA's request, Stan Barsch, a security officer at Blair, reserved this totaled vehicle from the abandoned auto section of the MCPD. The MCPD typically retrieves and pays for the towing of cars to schools from junkyards or abandoned auto units, where insurance companies usually dump unclaimed cars after the court proceedings of a crash.

SGA president Molly Martinez made an announcement Oct. 24 to Blair students explaining the car's purpose in demonstrating the consequences of drunk driving. Martinez urged all students to avoid drinking and driving, or driving with anyone else who has been drinking. "Someone died in that car and we don't want anything so tragic to happen to anyone because of one bad decision," said Martinez.

The car will remain at Blair until the end of the week.