The boys' track team took third place and the girls' team tied for fourth with Whitman High School at the 4A West regional competition on Wednesday and Thursday, May 14 and 15 at Magruder High School. The competition awarded a total of nine Blazers for 15 various events, advancing them to the state competition that will take place on Friday and Saturday May 23 and 24 at Morgan State University in Baltimore, Maryland. The 4A West division consisted of over 13 schools from the Montgomery County area, sending the top four runners in each event to the state competition. 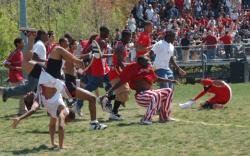 Photo: The outdoor track team shows their spirit at the spring pep rally.

Photo: The outdoor track team shows their spirit at the spring pep rally.

The qualifying athletes marked a Blair track milestone, according to coach Ralph Penn. "I'm extremely happy. This is the most athletes Blair has ever had qualify for the state level," he said.

The team had expected another star, senior Nilan Schnure, to advance to the state level before he twisted his ankle during warm-ups on Thursday. "We're sad to see what happened to Schnure, but overall it looks pretty good for states. This entire experience has been surprisingly unbelievable - in a good way," Penn said.

The following students will compete at the state level: