When Wally Szczerbiak and Ron Artest met on the court Friday night, they were not in Minnesota, nor in Indiana, where until last week the two had been for seven and five years, respectively. Instead, the pair met in Boston, where Szczerbiak's new team, the Celtics, hosted Artest's new squad, the Sacramento Kings. Artest and Szczerbiak found new homes last week via trades that could have a significant impact on the second half of the NBA season.

The Celtics announced Thursday that guard Ricky Davis had been shipped to Minnesota with three of his teammates in exchange for the Timberwolves' Szczerbiak and Michael Olowokandi. The announcement came just one day after Sacramento acquired NBA bad boy Artest from the Indiana Pacers in exchange for Peja Stojakovic in a swapping of ex-NBA All-Stars. The trades are indicative of what could be a flurry of moves made by NBA teams in the weeks before the Feb. 23 trade deadline. 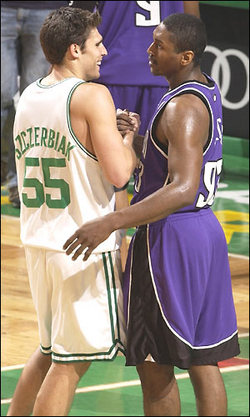 Artest and Szczerbiak Suit Up For New Teams

Photo: Ron Artest and Wally Szczerbiak greet each other in Boston donning their new colors.

Photo: Ron Artest and Wally Szczerbiak greet each other in Boston donning their new colors.

Artest, labeled the "Terrell Owens of basketball," has appeared in just 16 games this season, averaging 19.4 points, 2.6 steals and 4.9 rebounds per game. Disappointed in Stojakovic's defensive intensity, the Kings acquired Artest in hopes of giving their lackluster and underachieving team a boost on the defensive end and a shot of energy. Artest's rocky relationship with Pacers' star Jermaine O'Neal forced the swingman, who was suspended 73 games last season for his actions in the infamous Nov. 15 brawl in Detroit, to again be sidelined - this time as he awaited a trade.

Stojakovic, who is averaging 16.5 points and 5.3 boards per game, grew unhappy after learning of Sacramento's intentions to trade him. The 6-foot-10-inch forward will join an Indiana team poised to make a run in the Eastern Conference playoffs, provided O'Neal can return from a recent injury.

Minnesota's acquisition of Davis gives the struggling defensive squad a nasty defender at the guard spot and a complement to MVP candidate Kevin Garnett, whose disdain for Szczerbiak may have forced the Timberwolves' hand in the trade. Davis is averaging 19.6 points and 5.1 assists per game through 45 games in 2005-2006.

The Celtics dealt Davis in an attempt to bolster their offense, picking up Szczerbiak's career-high 20.1 points per game and 40.6 percent shooting from three-point land. The seven-foot centers swapped in the deal - Olowokandi and new Wolve Mark Blount - have combined to average less than 20 points and ten rebounds halfway through the 05-06 season.

The glut of player movement before February's All-Star Break can be attributed to a slew of hungry teams hoping to sneak into the playoffs. Sacramento (19-26) and Minnesota (21-22) will likely be fighting for the same playoff position in the Western Conference, while the Pacers (21-22) hold just a 1.5 game lead for the eighth seed in the East.

With trade rumors still circulating and plenty of teams in need of help in the second half of the season, it is not inconceivable that Artest, Stojakovic, Davis or Szczerbiak could be re-routed before the trade deadline. The New Orleans/Oklahoma City Hornets (22-22) acquired center Steven Hunter (5 PPG, 4 RPG) from the Philadelphia 76ers earlier in the week in exchange for a pair of future draft picks, while the Phoenix Suns (29-16) added swingman Nikoloz Tskitishvili from Minnesota.

According to ESPN The Magazine, the Celtics are rumored to be shopping Paul Pierce, possibly to the Chicago Bulls for guard Ben Gordon and suspended forward Tim Thomas. Also looking to swap are the Denver Nuggets and Seattle SuperSonics, whose trade bait consists of guards Ronald "Flip" Murray and Earl Watson respectively. And with the T-Wolves talking of trading Garnett, the NBA's second half is sure to be a bartering bonanza.