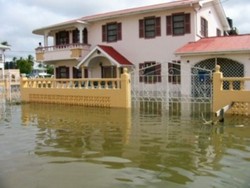 Photo: A house under water after the floods in December and January in Guyana.

Photo: A house under water after the floods in December and January in Guyana.

It was hard for me to picture the cozy house in Friendship Village (where I had spent my Christmas vacation of 1996) drenched in rainwater. It was harder still to think about the difficulties my aunt, uncle, cousin and his family must have faced in being forced to leave this house and move miles away.

The recent floods, which reeked havoc in the only English-speaking South American nation, Guyana, have caused 35 deaths, forced thousands from their homes, cost millions in damage and even shut down the capital, Georgetown, for a few days. The high level of water mainly affected the coastline, including Georgetown and the East Coast country of Demerara, where my family lives.

A century of destruction

My aunt was just one of thousands – 300,000 to be exact – of Guyanese to be affected by flood water, which reached as high as five feet in some regions. The floods were the result of heavy rainfall, which began Dec. 26, 2004 and continued until late January. From Jan. 1 until Jan. 16, Guyana saw 23 inches of rainfall, which is three times 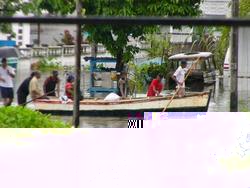 Boats in the Water

Photo: A boat in the water, providing Guyanese with immediate transportation after the floods.

Photo: A boat in the water, providing Guyanese with immediate transportation after the floods.

greater than the usual amount for the month of January. That heavy rainfall has not been seen in the country since 1888, which makes these numbers the highest in 100 years.

Although unusually high rainfall has contributed to the floods, according to my father, who was born and raised in Guyana, there are other contributing factors. In fact, they are more likely man-made, namely poor maintenance of dams and improper garbage disposal as controlled by the national, regional and local governments. These factors worsened the conditions and in turn lead to a greater outbreak of disease.

One of the main concerns of the flooding has been the spread of water-borne diseases and diseases carried in animal urine. These include cholera, diarrhea, dysentery and dengue and typhoid fever. The disease that has caused the most problems in the post-flood outbreak, however, has been leptospirosis, a bacterial infection that is contracted when ingesting or coming in contact with water that has been contaminated with infected animal urine. Of the 35 deaths linked to the flood, 22 have been suspected to be a result of leptospirosis. The causes of the other deaths are unknown.

Packing up, adding up and helping out 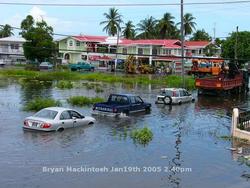 Photo: Cars caught in the high waters after the December and January floods.

Photo: Cars caught in the high waters after the December and January floods.

The cozy house in Friendship Village (which has been in my family for more than 70 years) luckily was spared the unrepairable damage faced by other families. Some furniture was destroyed, as were the downstairs cupboards, but the electrical appliances were saved.

My family members were also able to stay with friends in the more hilly parts of the country, which were free of floodwater; my aunt and uncle moved to Linden, a town that is 77 miles away from their village. Unfortunately, many Guyanese have not been this fortunate and are still living in government makeshift shelters because they have no homes to which to return.

My aunt and other relatives were able to return to their house three weeks after leaving to find limited physical damage. However, countless businesses along the coastline and in Georgetown have reported damages ranging from $50,000 to $150 million in losses. Many schools, including the University of Guyana, suffered damages to their on-campus buildings and lost books and supplies in the flood. Others are missing furniture, electrical equipment and clothing. In many towns, clean drinking water and sanitation have also been major problems. 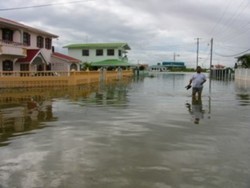 Photo: A man trudges through the water in Guyana.

Photo: A man trudges through the water in Guyana.

To compensate for these losses, the Guyanese government has set aside $200 million from its budget to use in helping with water drainage and post-flood cleanup. In addition, many world organizations, such as the International Development Bank, the International Monetary Fund, the United Nations, Oxfam and the Caribbean Development Bank, have contributed money and volunteers aid in flood relief. Thanks to these groups' help, floodwater has been drained from most disaster areas along the coastline.

Still, there is much more to do. The water left behind debris that must be disposed of, animal carcasses that need proper removal and schools and factories that require disinfection and extensive repair.

If you would like to find out more and offer your assistance, you can go to the above-mentioned organizations' web sites or visit the Guyana flood web site.