"Transformers": not the familiar cartoon

Lacking in story, perfect for summer

With nothing short of what is expected of a plotless summer film, director Michael Bay delivers "Transformers," the robot-inspired action extravaganza. Though the movie lacks a solid and sensible storyline, "Transformers" makes up for it with clever humor and spectacular, though expensive, robot-on-robot fight scenes. 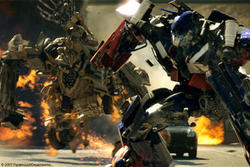 Back when humans were still cavemen, the story goes, the robotic inhabitants of the planet Cybertron had established technology that allowed them to shape-shift. Unfortunately, Cybertron's two competing factions, the good Autobots and the evil Decepticons, destroy their planet and lose the Allspark that fuels their technology. After years of searching, the robots finally sense the Allspark on Earth, where dorky high school student Sam Witwicky (Shia LaBoeuf) coincidentally sells a pair of glasses that are stained with the technology's location. Meanwhile, America's security is threatened when the Decepticons decimate a U.S. military base, leaving Captain Lennox (Josh Duhamel) as one of the sole survivors, and hack into America's top-secret security files. The movie then blows into messy combat between the Autobots and Decepticons, while the humans struggle to survive the alien attack.

The comical LaBoeuf easily fits into the role of the unwelcome "everyone throws spitballs at me" high school student. His character's relationship with the school's popular girl, Mikaela Banes (Megan Fox), begins when he offers her a ride home. Mikaela, an expert mechanic, then gives up her life in safety to work with the former loser and help the Autobots locate the Allspark. Sam's parents, Mr. and Mrs. Witwicky (Kevin Dunn and Julie White), provide the remaining comic relief as the unlikely parents that egg on Sam's sexually implicit "happy hour" as well as his ability to pick up pretty girls.

The robots speak for themselves; by transforming from hot cars to 20-foot towering goliaths in mere seconds, they are sure to stun. Bay's experience in directing massive action scenes from directing "Pearl Harbor" and "Armageddon" shines through in the epic battles between the Autobots and Decepticons. In one particular fight scene, Megatron (Hugo Weaving) and Optimus Prime (Peter Cullen), the respective leaders of the Decepticons and Autobots, throw breathtakingly real fire at each other.

In spite of the comedy and technical brilliance of the movie, the storyline is a mess. Three separate groups of people only connected by the knowledge that huge alien robots are invading Earth are thrown together on a plane and expected to create a realistic story. Later, a mysterious government agency called "Sector 7" suddenly appears and informs the Secretary of Defense that it has known about Transformers since decades past, but did not find the 20-foot machines threatening to national security. The film may get confusing even to the most attentive viewer.

Exciting, violent, frightening and loaded with attractive actors, Transformers is still the perfect flick for the summer despite the flaws in its choppy plot.

"Transformers" is rated PG-13 for intense sequences of sci-fi action violence, brief sexual humor and language. It is now playing in all area theaters.